Find which commit is currently checked out in Git

I'm in the middle of a git bisect session.

What's the command to find out which commit (SHA1 hash) I am currently on? git status does not provide this.

You have at least 5 different ways to view the commit you currently have checked out into your working copy during a git bisect session (note that options 1-4 will also work when you're not doing a bisect):

I'll explain each option in detail below.

As explained in this answer to the general question of how to determine which commit you currently have checked-out (not just during git bisect), you can use git show with the -s option to suppress patch output:

You can also simply do git log -1 to find out which commit you're currently on.

Also as of Git version 1.8.3+ (and possibly earlier, again not sure), running git status will also show you what commit you have checked out during a bisect and when you're in detached HEAD state:

Finally, while you're doing a git bisect, you can also simply use git bisect visualize or its built-in alias git bisect view to launch gitk, so that you can graphically view which commit you are on, as well as which commits you have marked as bad and good so far. I'm pretty sure this existed well before version 1.8.3, I'm just not sure in which version it was introduced: 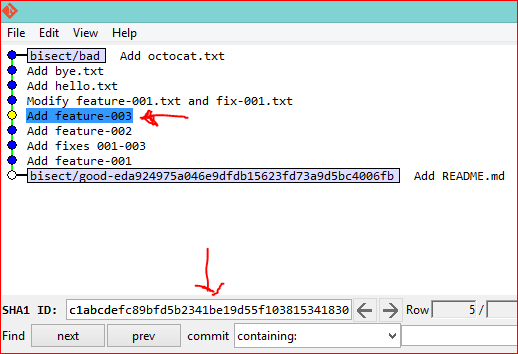 You can just do:

To explain a bit further: git rev-parse is git's basic command for interpreting any of the exotic ways that you can specify the name of a commit and HEAD is a reference to your current commit or branch. (In a git bisect session, it points directly to a commit ("detached HEAD") rather than a branch.)

Alternatively (and easier to remember) would be to just do:

... which defaults to showing the commit that HEAD points to. For a more concise version, you can do:

Alternatively (if you have tags):

(Good for naming a version, not very good for passing back to git.)

Or (as Mark suggested, listing here for completeness):

If you want to extract just a simple piece of information, you can get that using git show with the --format=<string> option...and ask it not to give you the diff with --no-patch. This means you can get a printf-style output of whatever you want, which might often be a single field.

For instance, to get just the shortened hash (%h) you could say:

If you're looking to save that into an environment variable in bash (a likely thing for people to want to do) you can use the $() syntax:

Use git show, which also shows you the commit message, and defaults to the current commit when given no arguments.

2159
How do I set a variable to the output of a command in Bash?
2
Generating Info File on Compilation

10473
How do I undo 'git add' before commit?
3073
How to find and restore a deleted file in a Git repository
3255
Commit only part of a file in Git
5944
Move the most recent commit(s) to a new branch with Git
7862
How do I check out a remote Git branch?
3532
Stash only one file out of multiple files that have changed with Git?
1940
How to compare files from two different branches
7620
How do I revert a Git repository to a previous commit?
803
Skip Git commit hooks
2956
What does cherry-picking a commit with Git mean?