How to view output of OutputDebugString?

I want to use OutputDebugString() in my application and then have the option to show it in a separate viewer when the application is deployed in the field.

That is to say, I don't want to have to change a flag and rebuild my .exe to turn debugging on and off.

Googling around, it seems like DebugView should handle that, but neither it, nor TraceTool show any output from this code.

I have read the documentation, to no avail, and see that others have had similar problems, but have not posted a solution.

Is there a solution?

The DebugView tool works fine; only be sure to launch your application directly (without the Delphi IDE or another debugger attached).

Anyway, the natural way to view the OutputDebugString output for a Delphi application is to use the Delphi IDE and the Event Log Window. 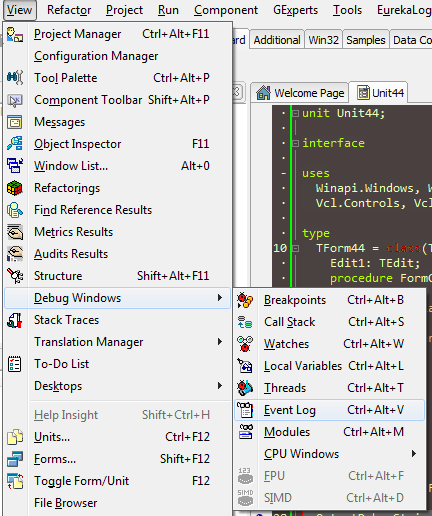 GExperts has a debug viewer and a unit you add to your application that will do this for you, even in XE2 Starter. See the DebugIntf unit and the GExpertsDebugWindow.exe application that it includes. These work under XE2 Starter (and pretty much all other versions of Delphi).

GExperts also includes tons of other IDE and editor enhancements that are great, and of course they've been around forever, so they're pretty solid tools.

CnWizards contains a tool, CnDebugViewer.exe, which can capture OutputDebugString (should be run as administrator in Windows 7).

Not like DbgView, CnDebugViewer can create separated tabs for different applications.

CnPack contains an unit, CnDebug.pas. Using this unit, you can trace typed objects, collections, exceptions, memdump, etc. With CnDebug.pas, you also can set whether to autostart CnDebugViewer, whether dump to file while sending debug messages, etc.

You could use CodeSite Express, which we've been very happy with in day-to-day use: http://www.raize.com/devtools/codesite/Default.asp.

In my version of XE5, I had to enable the "Output Messages" option under:

I don't recall disabling it.

Not the answer you're looking for? Browse other questions tagged delphi debugview outputdebugstring or ask your own question.

16
In Delphi, is OutputDebugString thread safe?
4
Using a COM DLL in delphi - Access violation in MSVCR80D.dll error
2
OutputDebugString + DebugView = not tabs!
3
How to prevent from loss of focus when showing and/or closing secondary forms from the main form?
5
indy GET dowloading speed
7
Error: Undeclared identifier: 'OutputDebugString'
0
Windows 2008 r2 debugview (OutputDebugString) issue
2
How to view output of OutputDebugString () across the network?
1
Select Cell in TAdvStringGrid with hidden columns
2
How would my program listen to OutputDebugString output and allow launch of multiple instances?