Performance difference for control structures 'for' and 'foreach' in C#

Which code snippet will give better performance? The below code segments were written in C#.

I'd personally use LINQ to avoid the "if" too:

EDIT: For those of you who are claiming that iterating over a List<T> with foreach produces the same code as the for loop, here's evidence that it doesn't:

The compiler treats arrays differently, converting a foreach loop basically to a for loop, but not List<T>. Here's the equivalent code for an array:

Interestingly, I can't find this documented in the C# 3 spec anywhere...

A for loop gets compiled to code approximately equivalent to this:

Where as a foreach loop gets compiled to code approximately equivalent to this:

So as you can see, in this instance it won't make very much difference, however the enumerator for a linked list would probably look something like this:

In .NET you will find that the LinkedList<T> class does not even have an indexer, so you wouldn't be able to do your for loop on a linked list; but if you could, the indexer would have to be written like so:

As you can see, calling this multiple times in a loop is going to be much slower than using an enumerator that can remember where it is in the list.

An easy test to semi-validate. I did a small test, just to see. Here is the code:

And here is the foreach section:

When I replaced the for with a foreach -- the foreach was 20 milliseconds faster -- consistently. The for was 135-139ms while the foreach was 113-119ms. I swapped back and forth several times, making sure it wasn't some process that just kicked in.

However, when I removed the foo and the if statement, the for was faster by 30 ms (foreach was 88ms and for was 59ms). They were both empty shells. I'm assuming the foreach actually passed a variable where as the for was just incrementing a variable. If I added

Then the for become slow by about 30ms. I'm assuming this had to do with it creating foo and grabbing the variable in the array and assigning it to foo. If you just access intList[i] then you don't have that penalty.

In all honesty.. I expected the foreach to be slightly slower in all circumstances, but not enough to matter in most applications.

edit: here is the new code using Jons suggestions (134217728 is the biggest int you can have before System.OutOfMemory exception gets thrown):

And here are the results:

Swapping them around to see if it deals with the order of things yields the same results (nearly).

Note: this answer applies more to Java than it does to C#, since C# doesn't have an indexer on LinkedLists, but I think the general point still holds.

If the list you're working with happens to be a LinkedList, the performance of the indexer-code (array-style accessing) is a lot worse than using the IEnumerator from the foreach, for large lists.

When you access element 10.000 in a LinkedList using the indexer syntax: list[10000], the linked list will start at the head node, and traverse the Next-pointer ten thousand times, until it reaches the correct object. Obviously, if you do this in a loop, you will get:

When you call GetEnumerator (implicitly using the forach-syntax), you'll get an IEnumerator object that has a pointer to the head node. Each time you call MoveNext, that pointer is moved to the next node, like so:

As you can see, in the case of LinkedLists, the array indexer method becomes slower and slower, the longer you loop (it has to go through the same head pointer over and over again). Whereas the IEnumerable just operates in constant time.

Of course, as Jon said this really depends on the type of list, if the list is not a LinkedList, but an array, the behavior is completely different.

Like other people have mentioned though the performance doesn't actually matter much, the foreach will always be a little bit slower because of the IEnumerable/IEnumerator usage in the loop. The compiler translates the construct into calls on that interface and for every step a function + a property are called in the foreach construct.

This is the equivalent expansion of the construct in C#. You can imagine how the performance impact can vary based on the implementations of MoveNext and Current. Whereas in an array access, you don't have that dependencies.

After reading enough arguments that "the foreach loop should be preferred for readability", I can say that my first reaction was "what"? Readability, in general, is subjective and, in this particular instance, even more. For someone with a background in programming(practically, every language before Java), for loops are much easier to read than foreach loops. In addition, the same people claiming that foreach loops are more readable, are also supporters of linq and other "features" that make code hard to read and maintain, something that proves the above point.

About the impact on performance, see the answer to this question.

EDIT: There are collections in C#(like the HashSet) that have no indexer. In these collections, foreach is the only way to iterate and it is the only case I think it should be used over for.

There is a further interesting fact which can be easy missed when testing the speed of both loops: Using the debug mode doesn't let the compiler optimize the code using the default settings.

This led me to the interesting result that the foreach is faster than for in the debug mode. Whereas the for ist faster than foreach in the release mode. Obviously the compiler has better ways to optimize a for loop than a foreach loop which compromises several method calls. A for loop is by the way such fundamental that it's possible that this is even optimized by the CPU itself.

In the example you provided, it is definitely better to use foreach loop instead a for loop.

So for everyday code, performance is not a reason to use the more complex for, while or do-while constructs.

Check out this link: http://www.codeproject.com/Articles/146797/Fast-and-Less-Fast-Loops-in-C

you can read about it in Deep .NET - part 1 Iteration

it's cover the results (without the first initialization) from .NET source code all the way to the disassembly.

for example - Array Iteration with a foreach loop: 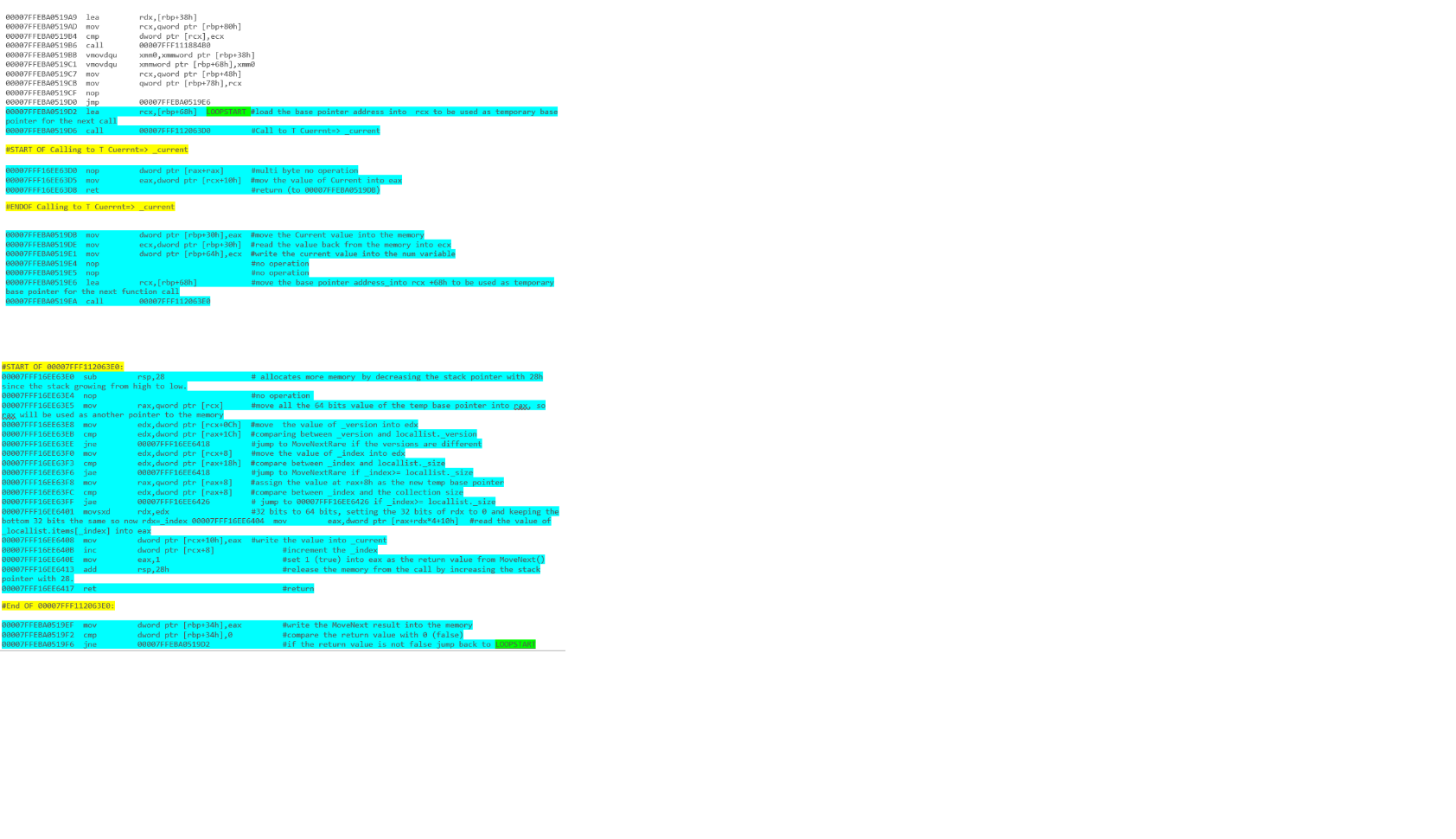 and the end results: 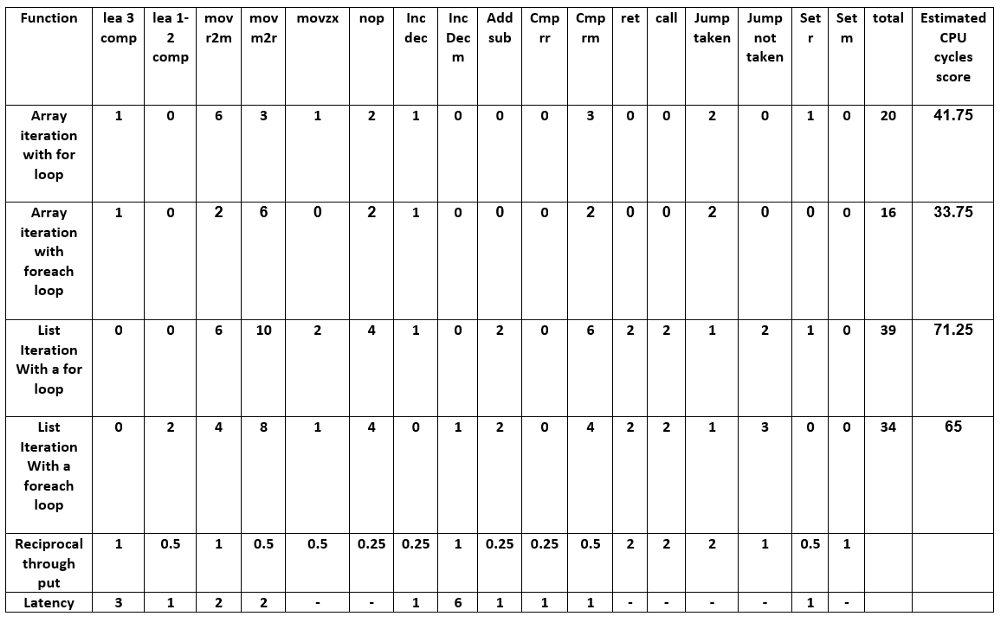 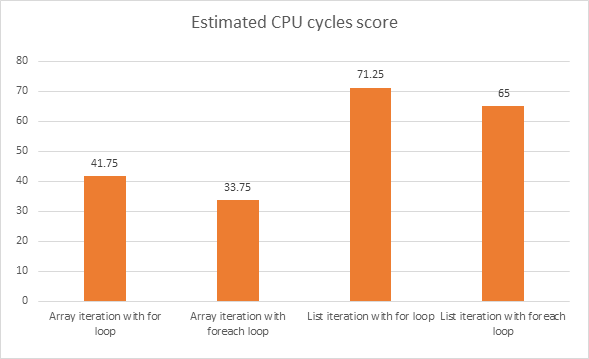 Not the answer you're looking for? Browse other questions tagged c# performance for-loop foreach or ask your own question.

3
C#: for verses foreach
0
which is faster: for or foreach
0
Major difference between 'for each' and 'for' loop in .NET
-3
Performance analyze for loop and foreach
407
In .NET, which loop runs faster, 'for' or 'foreach'?
199
foreach vs someList.ForEach(){}
47
Why should I use foreach instead of for (int i=0; i<length; i++) in loops?
24
Why do C# Arrays use a reference type for Enumeration, but List<T> uses a mutable struct?
13
Difference between foreach and for loops over an IEnumerable class in C#
4
What are the advantages of using IEnumerable over an Array?
See more linked questions