There are a lot of threads relating to this error but none of those solutions worked for me. And, none explained why this error is here.

have not tried and suspect that these also will not work:

why am I getting this error and what is the solution?

If it's a DLL, then DllMain.

The project type can be seen under project properties, Linker, System, Subsystem. It would say either "Console" or "Windows".

Note that the entry point name varies depending on whether UNICODE is defined or not. In VS2008, it's defined by default.

The proper prototype for main is either

Make sure it's one of those.

If you're getting an error on _TCHAR, place an

If you think the issue is with one of the headers, go to the properties of the file with main(), and under Preprocessor, enable generating of the preprocessed file. Then compile. You'll get a file with the same name a .i extension. Open it, and see if anything unsavory happened to the main() function. There can be rogue #defines in theory...

With UNICODE defined (which is the default), the linker expects the entry point to be wmain(), not main(). _tmain has the advantage of being UNICODE-agnostic - it translates to either main or wmain.

Some time ago, there was a reason to maintain both an ANSI build and a Unicode build. Unicode support was sorely incomplete in Windows 95/98/Me. The primary APIs were ANSI, and Unicode versions existed here and there, but not pervasively. Also, the VS debugger had trouble displaying Unicode strings. In the NT kernel OSes (that's Windows 2000/XP/Vista/7/8/10), Unicode support is primary, and ANSI functions are added on top. So ever since VS2005, the default upon project creation is Unicode. That means - wmain. They could not keep the same entry point name because the parameter types are different. _TCHAR is #defined to be either char or wchar_t. So _tmain is either main(int argc, char **argv) or wmain(int argc, wchar_t **argv).

The reason you were getting an error at _tmain at some point was probably because you did not change the type of argv to _TCHAR**.

If you're not planning to ever support ANSI (probably not), you can reformulate your entry point as

and remove the tchar.h include line.

Because it hasn't been mentioned yet, this was the solution for me:

So if you're still having trouble after trying everything else, it's worth checking to see if the configuration type is what you expect for your project. If it's not set correctly, the compiler will be looking for the wrong main symbol. In my case, it was looking for WinMain instead of DllMain.

I got this error while I was trying to turn off precompiled headers in a Console Application Project and removing the header file stdafx.h

In your main class, use the standard C++ main function protoype that others have already mentioned :

If you have a "Win32 project" + defined a WinMain and your SubSystem linker setting is set to WINDOWS you can still get this linker error in case somebody set the "Additional Options" in the linker settings to "/SUBSYSTEM:CONSOLE" (looks like this additional setting is preferred over the actual SubSystem setting.

I find that when i choose option of Project->Properties->Linker->System->SubSystem->Console(/subsystem:console), and then make sure include the function : int _tmain(int argc,_TCHAR* argv[]){return 0} all of the compiling ,linking and running will be ok;

I had this error when accidentally putting the wmain inside a namespace. wmain should not be in any namespace. Moreover, I had a main function in one of the libs I was using, and VS took the main from there, what made it even stranger.

I had this problem minutes ago. It went away when I added 'extern "C"' to the main() definition.

Oddly, another simple program I wrote yesterday is almost identical, does not have the extern "C", yet compiled without this linker error.

This makes me think the problem is some subtle setting to be found deep in some configuration dialog, and that 'extern "C"' doesn't really solve the underlying problem, but superficially makes things work.

this main works in both linux and windows - found it through trial and error and help from others so can't explain why it works, it just does int main(int argc, char** argv)

and here is the same answer in Wikipedia Main function

I just need to comment that (by prepending //) and it's good.

I had this happen in Visual Studio 2015 too for an interesting reason. Just adding it here in case it happens to someone else.

I already had number of files in project and I was adding another one that would have main function in it, however when I initially added the file I made a typo in the extension (.coo instead of .cpp). I corrected that but when I was done I got this error. It turned out that Visual Studio was being smart and when file was added it decided that it is not a source file due to the initial extension.

Right-clicking on file in solution explorer and selecting Properties -> General -> ItemType and setting it to "C/C++ compiler" fixed the issue.

I had the problem before, but it was solved. The main problem was that I mistakenly spell the int main() function. Instead of writing int main() I wrote int mian()....Cheers ! 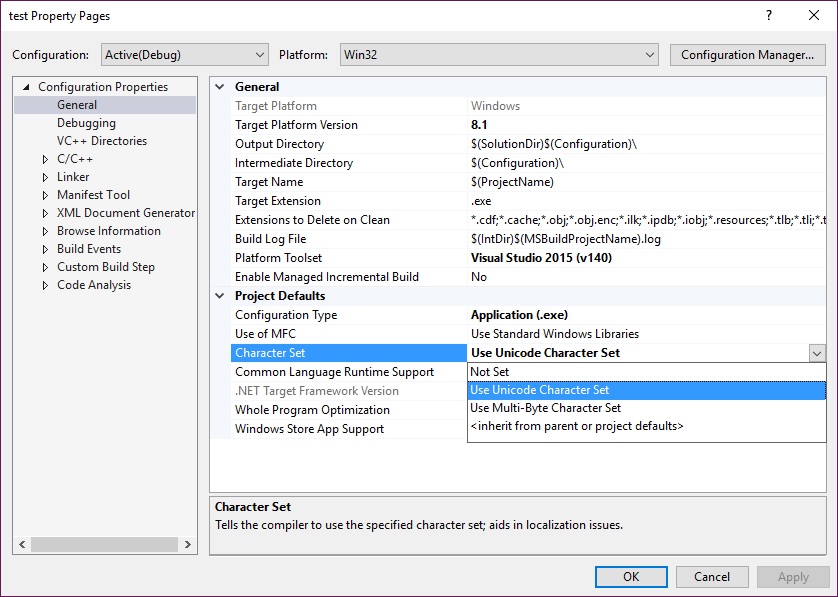 Set the system to console, following the previous suggestions. Only, also had to change the character set to Unicode, see the snapshot of Visual Studio 2015 above.

Not the answer you're looking for? Browse other questions tagged c++ windows visual-studio-2008 windows-7 lnk2019 or ask your own question.