How to see the current working directory in WinGHCi

I've started to teach myself Haskell, and for that I've installed The Haskell Platform for Windows. I'm using WinGHCi as of now. I learned that it has command :cd which is used to change directory. But the question is, how would I know which directory I'm currently in? Without knowing that first why would I want to change directory. I searched a lot but couldn't find the answer.

Please tell me if there is a way to know the current working directory. Preferably I would like to configure the command prompt itself to show the current directory, pretty much like Linux's Console.

Following @Daniel's suggestion, I did these: 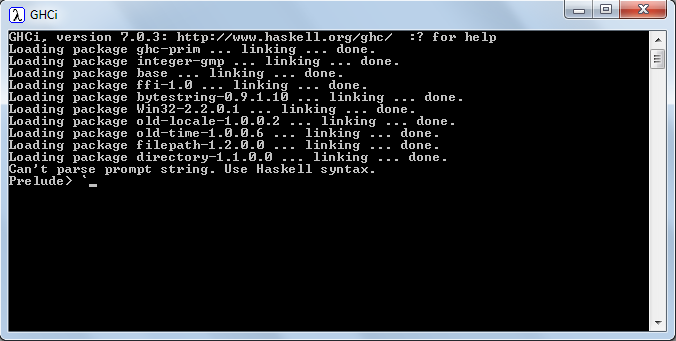 As you can see it loads more modules, and the last line says,

What does it mean? Which line is causing problem (from the following script)?

Also, if I rename ghci.conf file to some random name, and then start ghci.exe, it loads these modules: 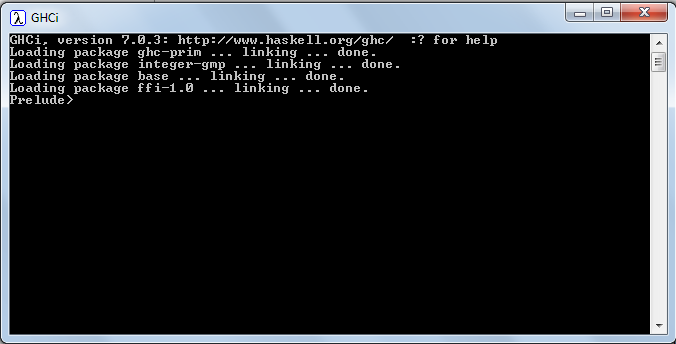 As I said before, it loads less number of modules, which means with ghci.conf, ghci.exe does something successfully, but fails at some point. How to fix that?

System.Directory.getCurrentDirectory from the directory package.

I am not sure if this is the "right" way to do it, but since :! allows shell commands, you can also get it with the appropriate shell command (of your OS) for reading out the directory or the content (so cd, ls and the likes). For example, you can write:

It depends what do you need the directory for. If you just want to print it out in your console, then this can help.

in the .ghci file.

Unfortunately, that doesn't make :cd dir reflect the change of directory, one would have to do a manual :doprompt afterwards, or use :mycd to change the directory.

To avoid too long prompts, one could manipulate the result of getCurrentDirectory by dropping an initial part of the file path.

Another drawback to that simple approach is that the prompt doesn't contain information about the loaded modules anymore. I believe all that could be overcome, but I'm not motivated enough to do the digging now.

Not the answer you're looking for? Browse other questions tagged haskell ghci working-directory winghci or ask your own question.

982
Getting the Current Working Directory in Java
28
Haskell / GHCi - loading modules from different directories
2
Hlint integration with (Win)GHCi
10
Haskell : can only load one file at a time via :load
17
Dynamic loading under GHCi
5
Getting Source Files to Run in Haskell Programming (WinGHCi)
13
How to set current directory in GHCi?
4
ghci: how to import modules in a folder
0
Fail to launch WinGHCi