Why prefer two's complement over sign-and-magnitude for signed numbers?

I'm just curious if there's a reason why in order to represent -1 in binary, two's complement is used: flipping the bits and adding 1?

Disclaimer: I don't rely on binary arithmetic for my job!

It's done so that addition doesn't need to have any special logic for dealing with negative numbers. Check out the article on Wikipedia.

Two's complement addition is very simple. You add numbers normally and any carry bit at the end is discarded. So they're added as follows:

But in your "intuitive" method, adding is more complicated:

Which is -3, right? Simple addition doesn't work in this case. You need to note that one of the numbers is negative and use a different algorithm if that's the case.

For this "intuitive" storage method, subtraction is a different operation than addition, requiring additional checks on the numbers before they can be added. Since you want the most basic operations (addition, subtraction, etc) to be as fast as possible, you need to store numbers in a way that lets you use the simplest algorithms possible.

Additionally, in the "intuitive" storage method, there are two zeroes:

Which are intuitively the same number but have two different values when stored. Every application will need to take extra steps to make sure that non-zero values are also not negative zero.

There's another bonus with storing ints this way, and that's when you need to extend the width of the register the value is being stored in. With two's complement, storing a 4-bit number in an 8-bit register is a matter of repeating its most significant bit:

It's just a matter of looking at the sign bit of the smaller word and repeating it until it pads the width of the bigger word.

With your method you would need to clear the existing bit, which is an extra operation in addition to padding:

You still need to set those extra 4 bits in both cases, but in the "intuitive" case you need to clear the 5th bit as well. It's one tiny extra step in one of the most fundamental and common operations present in every application.

Wikipedia says it all:

The two's-complement system has the advantage of not requiring that the addition and subtraction circuitry examine the signs of the operands to determine whether to add or subtract. This property makes the system both simpler to implement and capable of easily handling higher precision arithmetic. Also, zero has only a single representation, obviating the subtleties associated with negative zero, which exists in ones'-complement systems.

In other words, adding is the same, wether or not the number is negative.

Even though this question is old , let me put in my 2 cents.

Sum of any n-bit number and its 1's complement gives you the highest possible number that can be represented by those n-bits. Example:

Now what will happen if we try to add 1 more to the result. It will results in an overflow.

Two's complement allows addition and subtraction to be done in the normal way (like you wound for unsigned numbers). It also prevents -0 (a separate way to represent 0 that would not be equal to 0 with the normal bit-by-bit method of comparing numbers).

Two's complement allows negative and positive numbers to be added together without any special logic.

Instead, by using two's complement, we can add

The same is true for subtraction.

This means that subtraction and addition of both positive and negative numbers can all be done by the same circuit in the cpu.

this is to simplify sums and differences of numbers. a sum of a negative number and a positive one codified in 2's complements is the same as summing them up in the normal way.

The usual implementation of the operation is "flip the bits and add 1", but there's another way of defining it that probably makes the rationale clearer. 2's complement is the form you get if you take the usual unsigned representation where each bit controls the next power of 2, and just make the most significant term negative.

None of the other bits change meaning at all, and carrying into a7 is "overflow" and not expected to work, so pretty much all of the arithmetic operations work without modification (as others have noted). Sign-magnitude generally inspect the sign bit and use different logic.

To expand on others answers:

Division does require a different mechanism.

All these are true because two's complement is just normal modular arithmetic, where we choose to look at some numbers as negative by subtracting the modulo.

Reading the answers to this question, I came across this comment [edited].

In my opinion, the question asked in this comment is quite interesting and so I'd like first of all to rephrase it and then to provide an answer and an example.

ANSWER – The system establishes how to interpret a sequence of bytes through types. Types define

EXAMPLE – Below we assume that

Please note that these sizes are specific to my system. Although pretty common, they can be different from system to system. If you're curious of what they are on your system, use the sizeof operator.

First of all we define an array containing 4 bytes and initialize all of them to the binary number 10111101, corresponding to the hexadecimal number BD.

Then we read the array content using different types.

The 4 bytes in RAM (l_Just4Bytes[ 0..3 ]) always remain exactly the same. The only thing that changes is how we interpret them.

Again, we tell the system how to interpret them through types.

For instance, above we have used the following types to interpret the contents of the l_Just4Bytes array

[EDIT] This post has been edited after the comment by user4581301. Thank you for taking the time to drop those few helpful lines!

Two's complement is used because it is simpler to implement in circuitry and also does not allow a negative zero.

It's worthwhile to note that on some early adding machines, before the days of digital computers, subtraction would be performed by having the operator enter values using a different colored set of legends on each key (so each key would enter nine minus the number to be subtracted), and press a special button would would assume a carry into a calculation. Thus, on a six-digit machine, to subtract 1234 from a value, the operator would hit keys that would normally indicate "998,765" and hit a button to add that value plus one to the calculation in progress. Two's complement arithmetic is simply the binary equivalent of that earlier "ten's-complement" arithmetic.

I have a slight addendum that is important in some situations: two's compliment is the only representation that is possible given these constraints:

To see why, it helps to reduce the cardinality; for example, Z_4. 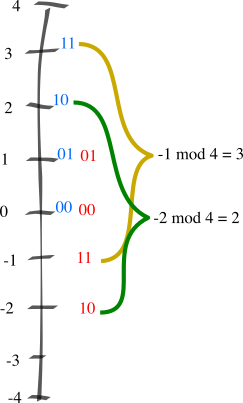 Sign and magnitude and ones' compliment both do not form a ring with the same number of elements; a symptom is the double zero. It is therefore difficult to work with on the edges; to be mathematically consistent, they require checking for overflow or trap representations.

Well, your intent is not really to reverse all bits of your binary number. It is actually to subtract each its digit from 1. It's just a fortunate coincidence that subtracting 1 from 1 results in 0 and subtracting 0 from 1 results in 1. So flipping bits is effectively carrying out this subtraction.

But why are you finding each digit's difference from 1? Well, you're not. Your actual intent is to compute the given binary number's difference from another binary number which has the same number of digits but contains only 1's. For example if your number is 10110001, when you flip all those bits, you're effectively computing (11111111 - 10110001).

This explains the first step in the computation of Two's Complement. Now let's include the second step -- adding 1 -- also in the picture.

Add 1 to the above binary equation:

What do you get? This:

This is the final equation. And by carrying out those two steps you're trying to find this, final difference: the binary number subtracted from another binary number with one extra digit and containing zeros except at the most signification bit position.

But why are we hankerin' after this difference really? Well, from here on, I guess it would be better if you read the Wikipedia article.

With a 2's complement representation we do not need separate digital components for subtraction—only adders and complementers are used.

A major advantage of two's-complement representation which hasn't yet been mentioned here is that the lower bits of a two's-complement sum, difference, or product are dependent only upon the corresponding bits of the operands. The reason that the 8 bit signed value for -1 is 11111111 is that subtracting any integer whose lowest 8 bits are 00000001 from any other integer whose lowest 8 bits are 0000000 will yield an integer whose lowest 8 bits are 11111111. Mathematically, the value -1 would be an infinite string of 1's, but all values within the range of a particular integer type will either be all 1's or all 0's past a certain point, so it's convenient for computers to "sign-extend" the most significant bit of a number as though it represented an infinite number of 1's or 0's.

When using of the any other signed representations allowed by the C Standard, every bit of the result could potentially be affected by any bit of the operands, making it necessary to either hold an entire value in registers at once or else follow computations with an extra step that would, in at least some cases, require reading, modifying, and rewriting each chunk of the result.

There are different types of representations those are:

Problem with Signed number representation is that there are two values for 0.

Problem with one's complement representation is that there are two values for 0.

-4
Why "-1" is 11111111 not 10000001 in signed int
1
Bit in the +/- form
493
What is “two's complement”?
90
How are integers internally represented at a bit level in Java?
31
Why are signed and unsigned multiplication different instructions on x86(-64)?
18
Why Two's Complement?
20
What is the meaning of "producing negative zeroes" in a system that doesn't support it?
6
Bits representation of negative numbers
12
How does Java calculate negative numbers?
7
Where did the leading 1 means negative number in signed int arise from?
See more linked questions

1267
Easy interview question got harder: given numbers 1..100, find the missing number(s) given exactly k are missing
3
Wrapping my head around hardware representations of numbers: a hypothetical two's complement question
18
Why Two's Complement?
0
Converting hex to binary and one and two's complement in 16 bits
29
Why is the range of signed byte is from -128 to 127 (2's complement) and not from -127 to 127?
8
Guaranteeing negative result when left shifting a negative number in two's complement?
5
Why does this two's complement shortcut work?
8
Why do BigInteger implementations use sign-magnitude instead of two's complement?
3
Subtracting signed binary numbers without two's complement