There is no description of the math behind this. Can someone explain why the formula works. Also can this be used for any situation where we want to synchronize time gradually over a window and avoid abrupt jumps ?

This works because the graph of cos(x) varies smoothly over time. It doesn't change abruptly, though it does change non-linearly. 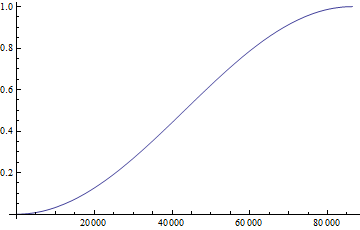 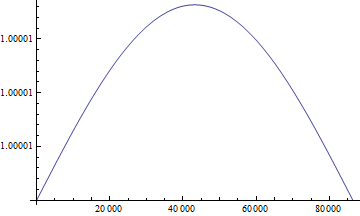 Towards the middle of the day, we see the largest changes. But those changes are on the order of 10^-5. They're small enough that anyone receiving the smeared time wouldn't suspect that something is wrong. At noon, you're talking about differences of microseconds in how much faster smeared time is moving.

One thing to note is they may not be smearing the leap second out over a day. It may be over a full year. In that case, the change is even smaller. In this case, the day to day changes are on the order of nanoseconds.

The periodic qualities of cos(x) are actually quite important. We can't just choose to use something like lie(t) = t / w. If we did, the lie would always increase over time. Leap seconds would just keep on piling up at a rate of 1 / w per second. cos(x) has the property that it oscillates between -1 and +1.

heres a plot of the function, you can see it has a nice and smooth gradual transition from 0 to 1.

They mentioned w was the window of time before the offical leap second was to be applied, so take that in seconds. Then t could be some increasing number, likely seconds again.

Not the answer you're looking for? Browse other questions tagged math synchronization timestamp or ask your own question.