Inversion Of Control vs Dependency Injection with selected quotes – is my understanding correct?

I've read a number of threads explaining the difference between IoC and DI and while many of explanations contradicted each other, I think they still helped me understand the difference.

So here I'd like to ask whether my understanding is correct and also post excerpts that helped me ( though some of them contradict each other ).

I know there have been lots of threads done on the subject, but I'm hoping this thread won't get closed since I don't think any of OPs in mentioned threads also showed all the relevant posts ( from various threads ) that helped them finally understand it.

Anyways, here is how I understand it (if possible,please address/answer each question individually ):

a) When we apply DIP principle at the framework level, then we use the term IoC? And one of the mechanisms to implement DIP at framework level is DI?

b) The term IoC does not apply when we implement DIP ( using DI ) at a lower level/non-framework level, in which case we simply call it DI?

c) DI helps us to achive DIP by passing the control of the actual creation of and selection of dependencies to a 3rd party which is neutral to either of the other 2 involved?

d) When DIP is applied ( using DI ) at framework level (IoC), then three types of control get inverted:

e) When DIP is applied (using DI) at non-framework level, then two types of control get inverted:

Here are excerpts that helped:

Why so many terms to say the same thing? IoC and DIP

Inversion of Control is the generic term. Dependency Injection is a specific type of IoC

Inversion of Control is when the framework/infrastructure invokes application code, rather than the other way around

can do DI without doing IoC. If you inject aConsoleStringWriter into a HelloWorld I don't really think of this as IoC because there is no "framework" or "infrastructure".

If you accept Fowler's definition, Inversion of Control is a much broader term than DI that covers allframework usage where you plug into a framework, but the framework is still in control. Dependency Injection is a specialization of IoC that applies IoC specifically to manage dependencies.

Where exactly is the difference between IoC and DI

Dependency Injection is a technique (hard to call it a pattern, really) of removing internal dependencies from implementations by allowing dependent objects to be injected into the class/method by an external caller. IoC frameworks use dependency injection to supply user modules and other dependent code to framework routines that "glue it all together." Dependency injection is used heavily by IoC frameworks because that is the mechanism that allows them to "Call You."

DIP is the principle that guides us towards DI. Basically, loose coupling is the goal, and there are at least two ways to achieve it. • Dependency Injection • Service Locator

Does anyone have a good analogy for dependency injection?

The essence of Inversion of Control (of which Dependency Injection is an implementation) is the separation of the use of an object from the management thereof.

Difference between ioc and dependency injection

The terms Dependency Injection (DI) & Inversion of Control (IoC) are generally used interchangeably to describe the same design pattern (although not everyone agrees on that point, and some people tend to apply them in slightly different ways). The pattern was originally called IoC, but Martin Fowler proposed the shift to DI because all frameworks invert control in some way and he wanted to be more specific about which aspect of control was being inverted.

Inversion of Control vs Dependency Injection

Inversion of Control (IoC) means that objects do not create other objects on which they rely to do their work. Instead, they get the objects that they need from an outside source (for example, an xml configuration file). Dependency Injection (DI) means that this is done without the object intervention, usually by a framework component that passes constructor parameters and set properties.

Well this is my point of view: 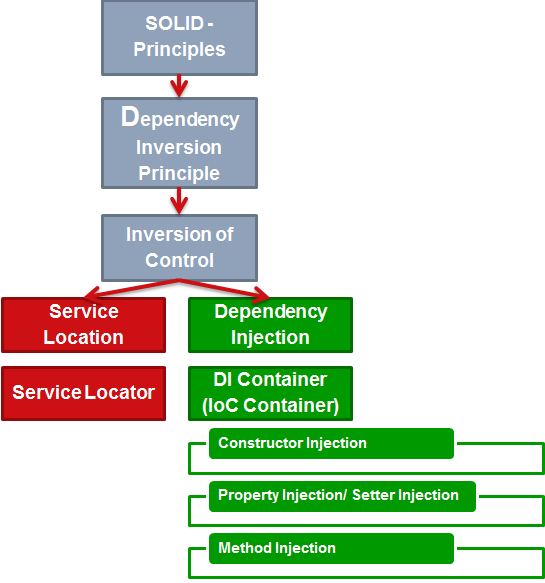 Dependency Injection and Service Location are a part of Inversion of Control. 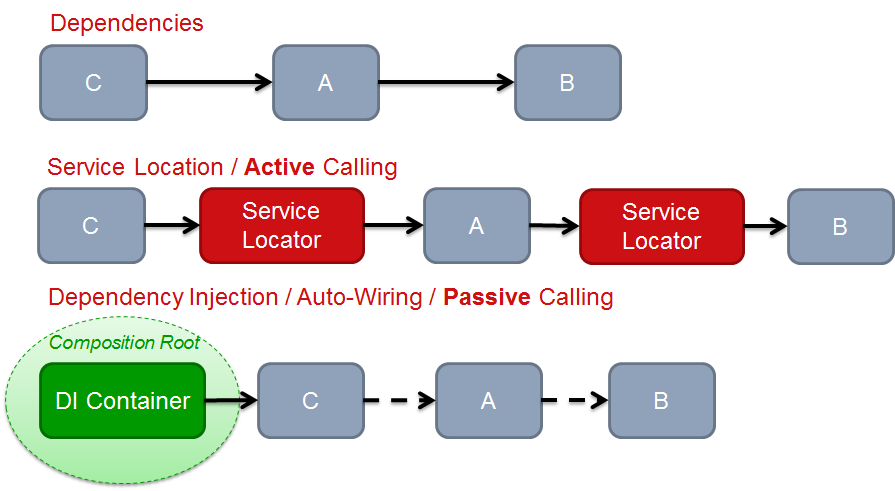 At the top is Dependency inversion Principle which is a way of designing software. It doesn’t say how to make independent module. Inversion of Control(IoC) provides the way of applying DPI principle. But still IoC doesn’t provide us specific implementation. It gives some methods so that we can invert the control. If we want to invert control using Binding inversion or dependency creation then we can achieve it by implementing dependency injection (DI).

Not the answer you're looking for? Browse other questions tagged dependency-injection inversion-of-control or ask your own question.