How to convert a string to an integer in JavaScript?

How do I convert a string to an integer in JavaScript?

The simplest way would be to use the native Number function:

If that doesn't work for you, then there are the parseInt, unary plus, parseFloat with floor, and Math.round methods.

unary plus if your string is already in the form of an integer:

if your string is or might be a float and you want an integer:

or, if you're going to be using Math.floor several times:

If you're the type who forgets to put the radix in when you call parseInt, you can use parseFloat and round it however you like. Here I use floor.

Interestingly, Math.round (like Math.floor) will do a string to number conversion, so if you want the number rounded (or if you have an integer in the string), this is a great way, maybe my favorite:

But there is a problem. If you try to convert "010" using parseInt function, it detects as octal number, and will return number 8. So, you need to specify a radix (from 2 to 36). In this case base 10.

Note that parseInt ignores bad data after parsing anything valid.
This guid will parse as 51:

There are two main ways to convert a string to a number in javascript. One way is to parse it and the other way is to change its type to a Number. All of the tricks in the other answers (e.g. unary plus) involve implicitly coercing the type of the string to a number. You can also do the same thing explicitly with the Number function.

parseInt and parseFloat are the two functions used for parsing strings to numbers. Parsing will stop silently if it hits a character it doesn't recognise, which can be useful for parsing strings like "92px", but it's also somewhat dangerous, since it won't give you any kind of error on bad input, instead you'll get back NaN unless the string starts with a number. Whitespace at the beginning of the string is ignored. Here's an example of it doing something different to what you want, and giving no indication that anything went wrong:

It's good practice to always specify the radix as the second argument. In older browsers, if the string started with a 0, it would be interpreted as octal if the radix wasn't specified which took a lot of people by surprise. The behaviour for hexadecimal is triggered by having the string start with 0x if no radix is specified, e.g. 0xff. The standard actually changed with ecmascript 5, so modern browsers no longer trigger octal when there's a leading 0 if no radix has been specified. parseInt understands radixes up to base 36, in which case both upper and lower case letters are treated as equivalent.

Changing the Type of a String to a Number

All of the other tricks mentioned above that don't use parseInt, involve implicitly coercing the string into a number. I prefer to do this explicitly,

This has different behavior to the parse methods (although it still ignores whitespace). It's more strict: if it doesn't understand the whole of the string than it returns NaN, so you can't use it for strings like 97px. Since you want a primitive number rather than a Number wrapper object, make sure you don't put new in front of the Number function.

Obviously, converting to a Number gives you a value that might be a float rather than an integer, so if you want an integer, you need to modify it. There are a few ways of doing this:

Any bitwise operator (here I've done a bitwise or, but you could also do double negation as in an earlier answer or a bitshift) will convert the value to a 32bit integer, and most of them will convert to a signed integer. Note that this will not do want you want for large integers. If the integer cannot be represented in 32bits, it will wrap.

To work correctly with larger numbers, you should use the rounding methods

Bear in mind that coeercion understands exponential notation and Infinity, so 2e2 is 200 rather than NaN, while the parse methods don't.

It's unlikely that either of these methods do exactly what you want. For example, usually I would want an error thrown if parsing fails, and I don't need support for Infinity, exponentials or leading whitespace. Depending on your usecase, sometimes it makes sense to write a custom conversion function.

Always check that the output of Number or one of the parse methods is the sort of number you expect. You will almost certainly want to use isNaN to make sure the number is not NaN (usually the only way you find out that the parse failed).

ParseInt() and + are different

Here is little comparison of speed (Mac Os only)... :)

You can run it on your browser by this link https://jsperf.com/js-cast-str-to-number/1 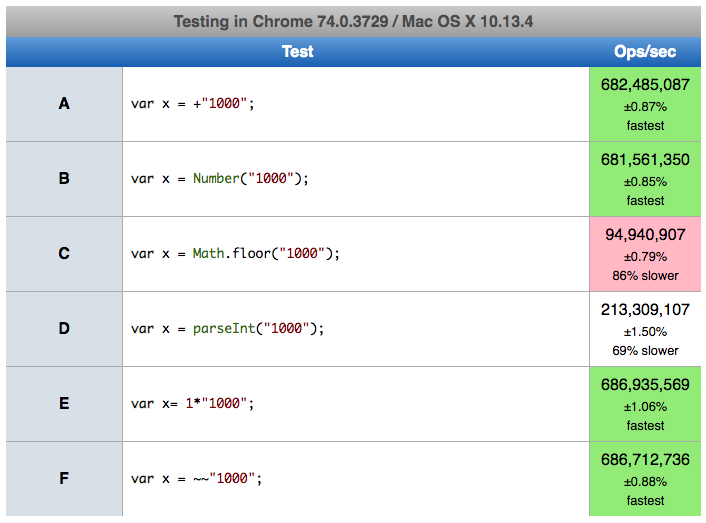 Though an old question, but maybe this can be helpful to someone.

I use this way of converting string to int number

So, when multiplying by 1, the value does not change, but js automatically returns a number.

But as it is shown below, this should be used if you are sure that the str is a number(or can be represented as a number), otherwise it will return NaN - not a number.

you can create simple function to use, e.g. 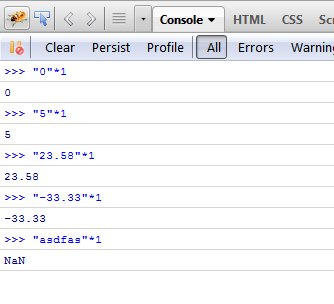 This is an old question, but I love this trick:

The double bitwise negative drops off anything after the decimal point AND converts it to a number format. I've been told it's slightly faster than calling functions and whatnot, but I'm not entirely convinced.

EDIT: Another method I just saw here (a question about the javascript >>> operator, which is a zero-fill right shift) which shows that shifting a number by 0 with this operator converts the number to a uint32 which is nice if you also want it unsigned. Again, this converts to an unsigned integer, which can lead to strange behaviors if you use a signed number.

Beware if you use parseInt to convert a float in scientific notation! For example:

In Javascript, you can do the following:-

Please see the below example.It will help clear your doubt

Also as a side note: Mootools has the function toInt() which is used on any native string (or float (or integer)).

we can use this unary "+" operator for parsing float too...

To convert a String into Integer, I recommend using parseFloat and NOT parseInt. Here's why:

So if you have noticed parseInt discards the values after the decimals, whereas parseFloat lets you work with floating point numbers and hence more suitable if you want to retain the values after decimals. Use parseInt if and only if you are sure that you want the integer value.

There are many ways in JavaScript to convert a string to a number value... All simple and handy, choose the way which one works for you:

Also any Math operation converts them to number, for example...

My prefer way is using + sign, which is the elegant way to convert a string to number in JavaScript.

Here is the easiest solution

In my opinion, no answer covers all edge cases as parsing a float should result in an error.

The easiest way would be to use + like this

Google gave me this answer as result, so...

I actually needed to "save" a string as an integer, for a binding between C and JavaScript, so I convert the string into a integer value:

You can use plus. For example:

then you can see the new variable's type bytypeof personAge1 ; which is number.

Another option is to double XOR the value with itself:

I only added one plus(+) before string and that was solution!

Summing the multiplication of digits with their respective power of ten:

The safest way to ensure you get a valid integer:

all of the above are correct. Please be sure before that this is a number in a string by doing "typeot x === 'number'" other wise it will return NaN

this way I always get an int back.

String to Number in JavaScript:

17
How to get numeric value from a prompt box?
16
Javascript to convert string to number?
9
Javascript add +1 to string
4
Why does 1+ +"2"+3 evaluate to 6 in JavaScript?
3
Treat Digit as Number
3
Integers adding as strings in Javascript
9
When to use + or Number() with string numbers?
1
What does "<+" mean in this code?
-1
Combining retrieved values with javascript and jquery
1
How can I set HTML's localStorage to an integer rather than string?
See more linked questions