Difference between a User and a Login in SQL Server

I have recently been running into many different areas of SQL Server that I normally don't mess with. One of them that has me confused is the area of Logins and Users. Seems like it should be a pretty simple topic...

A login can be associated to multiple tables thus associating that user to many tables.

So my question is why even have a login and a user? they seem to be pretty much one in the same. What are the differences, or what is it that I seem to be missing?

A "Login" grants the principal entry into the SERVER.

A "User" grants a login entry into a single DATABASE.

One "Login" can be associated with many users (one per database).

Each of the above objects can have permissions granted to it at its own level. See the following articles for an explanation of each

I think there is a really good MSDN blog post about this topic by Laurentiu Cristofor:

But logins are not enough, because work is usually done in a database and databases are separate realms. Access to databases is granted via users.

Let's take a step back for a quick overview: a login provides access to the server and to further get access to a database, a user mapped to the login must exist in the database.

I think this is a very useful question with good answer. Just to add my two cents from the MSDN Create a Login page:

As a security principal, permissions can be granted to logins. The scope of a login is the whole Database Engine. To connect to a specific database on the instance of SQL Server, a login must be mapped to a database user. Permissions inside the database are granted and denied to the database user, not the login. Permissions that have the scope of the whole instance of SQL Server (for example, the CREATE ENDPOINT permission) can be granted to a login. 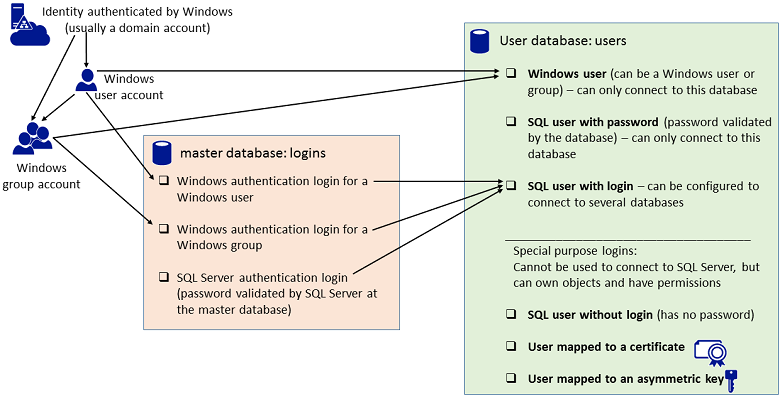 Not the answer you're looking for? Browse other questions tagged sql sql-server sql-server-2005 or ask your own question.