I am playing in Python a bit again, and I found a neat book with examples. One of the examples is to plot some data. I have a .txt file with two columns and I have the data. I plotted the data just fine, but in the exercise it says: Modify your program further to calculate and plot the running average of the data, defined by:

where r=5 in this case (and the y_k is the second column in the data file). Have the program plot both the original data and the running average on the same graph.

So far I have this:

So how do I calculate the sum? In Mathematica it's simple since it's symbolic manipulation (Sum[i, {i,0,10}] for example), but how to calculate sum in python which takes every ten points in the data and averages it, and does so until the end of points?

I looked at the book, but found nothing that would explain this :\

heltonbiker's code did the trick ^^ :D

And I got this: 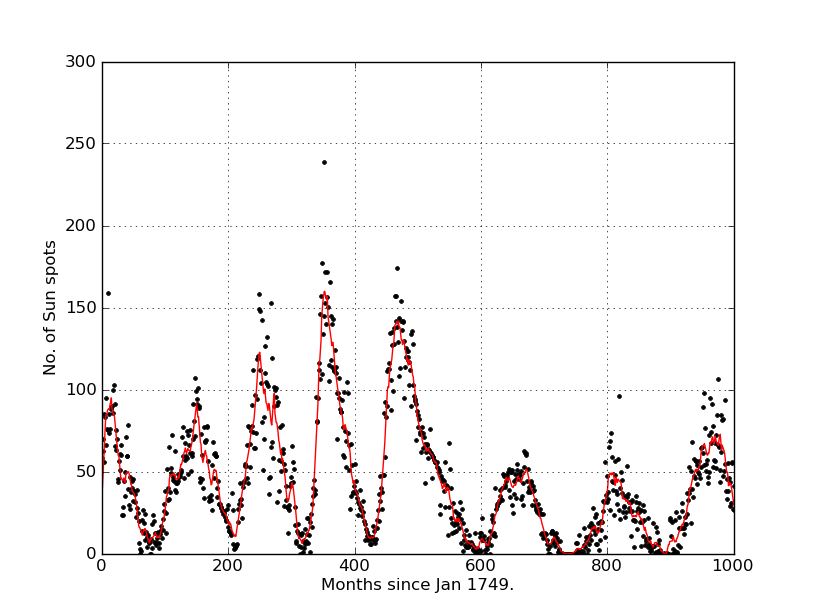 As numpy.convolve is pretty slow, those who need a fast performing solution might prefer an easier to understand cumsum approach. Here is the code:

where data contains your data, and ma_vec will contain moving averages of window_width length.

On average, cumsum is about 30-40 times faster than convolve.

Before reading this answer, bear in mind that there is another answer below, from Roman Kh, which uses numpy.cumsum and is MUCH MUCH FASTER than this one.

Best One common way to apply a moving/sliding average (or any other sliding window function) to a signal is by using numpy.convolve().

Here, interval is your x array, and window_size is the number of samples to consider. The window will be centered on each sample, so it takes samples before and after the current sample in order to calculate the average. Your code would become:

A moving average is a convolution, and numpy will be faster than most pure python operations. This will give you the 10 point moving average.

I would also strongly suggest using the great pandas package if you are working with timeseries data. There are some nice moving average operations built in.

This isn't the most efficient approach but it will give your answer and I'm unclear if your window is 5 points or 10. If its 10, replace each 5 with 10 and the 4 with 9.

There is a problem with the accepted answer. I think we need to use "valid" instead of "same" here - return numpy.convolve(interval, window, 'same') .

Rusty code to try this out -:

Try this with valid & same and see whether the math makes sense.

ETA: oops, and you want ave rather than sum, of course. So actually using your code and the formula:

Not the answer you're looking for? Browse other questions tagged python plot sum average or ask your own question.

1
Line of best fit for non-linear regression
263
Moving average or running mean
268
How to smooth a curve in the right way?
194
How to calculate rolling / moving average using python + NumPy / SciPy?
1
Time-series averaging in numpy/python
3
Python: How can we smooth a noisy signal using moving average?
0
Calculate and return average values in a list
1
Python last three items in stream
1
Python - Find width of bifurcation in x-y data
0
How does one plot a running average without importing external modules (other than matplotlib)?
See more linked questions

595
Finding what methods a Python object has
1666
Extracting extension from filename in Python
1458
How do I get the filename without the extension from a path in Python?
1059
Converting from a string to boolean in Python
1506
Why can't Python parse this JSON data?
624
Finding the average of a list
2091
Why is reading lines from stdin much slower in C++ than Python?
948
How to POST JSON data with Python Requests?
2576
How can I remove a key from a Python dictionary?