Does anyone know how to implement a sliding menu like some of the top apps of today?

Other Stack Overflow questions haven't had any answers on how to do this, so I'm trying to gather as much info to help out others. All the applications I mention below do a great job of implementing the slide menu. 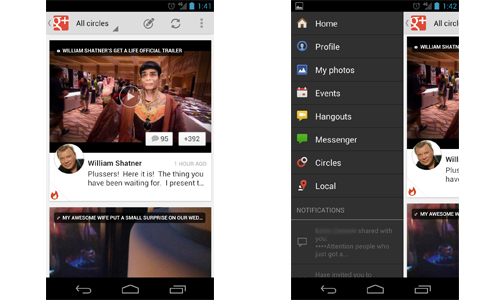 You can only go from the first screen to the second screen by clicking the G+ logo in the upper left hand corner. Notice that the entire screen moves from it's position and get's nudged to the right side of the screen (including the action bar). To get back to the first screen you can either slide the right side back into focus or you can click the G+ icon again. 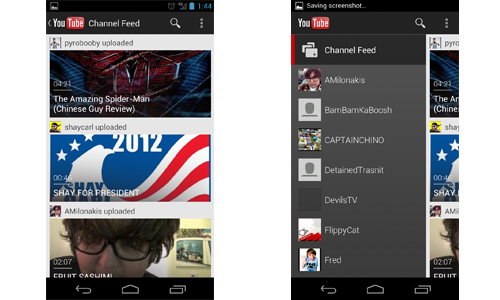 You can go from the first screen to second screen using two methods. Either click the YouTube logo in the upper left, or you can use a swipe gesture to move it to the right. This is already different from the G+ app. Secondly, you can see that the action bar stays put (Unlike G+). Lastly, to get the original screen back it works just like G+.

The Navigation Drawer pattern is officially described in the Android documentation!

Check out the following links:

Roman Nurik (an Android design engineer at Google) has confirmed that the recommended behavior is to not move the Action Bar when opening the drawer (like the YouTube app). See this Google+ post.

I answered this question a while ago, but I'm back to re-emphasize that Prixing has the best fly-out menu out there... by far. It's absolutely beautiful, perfectly smooth, and it puts Facebook, Google+, and YouTube to shame. EverNote is pretty good too... but still not as perfect as Prixing. Check out this series of posts on how the flyout menu was implemented (from none other than the head developer at Prixing himself!).

Adam Powell and Richard Fulcher talk about this at 49:47 - 52:50 in the Google I/O talk titled "Navigation in Android".

To summarize their answer, as of the date of this posting the slide out navigation menu is not officially part of the Android application design standard. As you have probably discovered, there's currently no native support for this feature, but there was talk about making this an addition to an upcoming revision of the support package.

With regards to the YouTube and G+ apps, it does seem odd that they behave differently. My best guess is that the reason the YouTube app fixes the position of the action bar is,

You're right in that this isn't very consistent behavior, but it doesn't seem like there is a 100% consensus within the Android team on how this behavior should be implemented yet. I wouldn't be surprised if in the future the apps are updated so that the navigation in both apps are identical (they seemed very keen on making navigation consistent across all Google-made apps in the talk).

Just recently I forked a current Github project called "RibbonMenu" and edited it to fit my needs:

ActionBar with Menu out 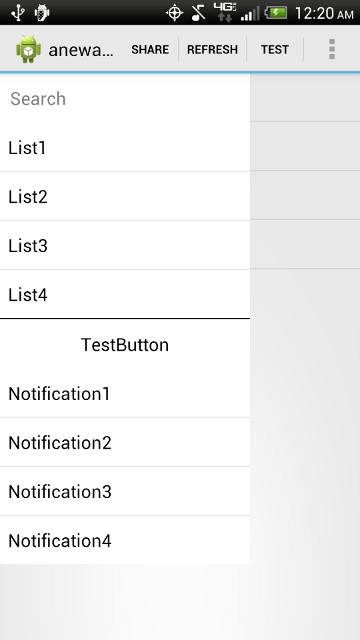 ActionBar with Menu out and search selected 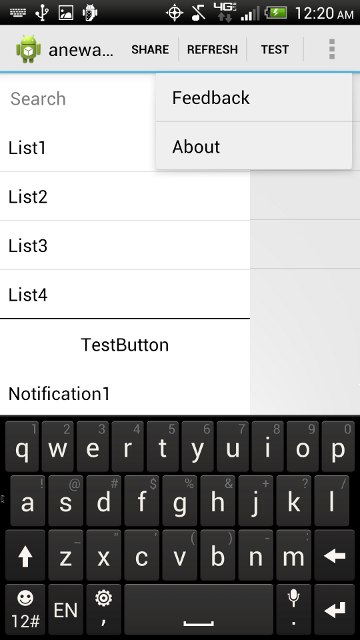 There is a great implementation of NavigationDrawer that follows the Google Material Design Guidelines (and compatible down to API 10) - The MaterialDrawer library (link to GitHub). As of time of writing, May 2017, it's actively supported. 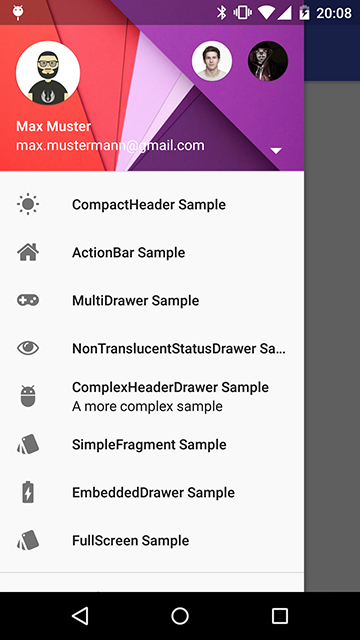 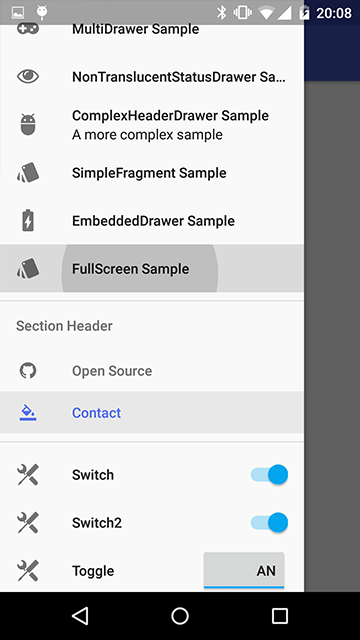 I know this is an old question but the most up to date answer is to use the Android Support Design library that will make your life easy.

If you are still trying to get that behavior I recently create a project Called SherlockNavigationDrawer and as you may expect is the implementation of the Navigation Drawer with ActionBarSherlock and works for pre Honeycomb devices. Check it:

Not the answer you're looking for? Browse other questions tagged android android-layout user-interface navigation-drawer or ask your own question.

2
How to divide screen between two activities, to show a menu?
1
Swiping between screens
118
How did Google manage to do this? Slide ActionBar in Android application
25
how to create smooth navigation drawer
15
Android - How to make slide menu like facebook, spotify and Google +
23
Collapsible sidebar with fluid twitter bootstrap
32
How to implement a DrawerLayout with a visible handle
6
Slide In and Slide Out animation for a layout
5
Facebook lide slideout menu (Not using that library)
3
ActionBar Navigation Drawer icon on the Right side
See more linked questions