I want to remove a file from my repository.

When --cached is given, the staged content has to match either the tip of the branch or the file on disk, allowing the file to be removed from just the index.

So, for a single file:

and for a single directory:

To remove an entire folder from the repo (like Resharper files), do this:

I had committed some resharper files, and did not want those to persist for other project users.

To remove files from the repository based on .gitignore, without deleting them from the local file system:

As per my Answer here: https://stackoverflow.com/questions/6313126/how-to-remove-a-directory-in-my-github-repository

To remove folder/directory or file only from git repository and not from the local try 3 simple steps.

Steps to ignore that folder in next commits

To ignore that folder from next commits make one file in root named .gitignore and put that folders name into it. You can put as many as you want 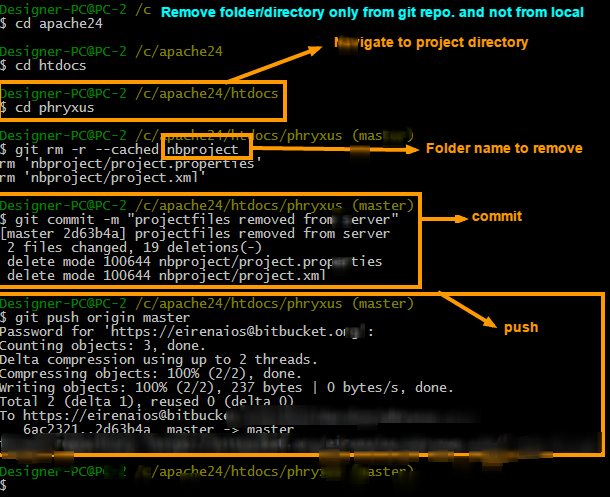 Also, if you have commited sensitive data (e.g. a file containing passwords), you should completely delete it from the history of the repository. Here's a guide explaining how to do that: http://help.github.com/remove-sensitive-data/

Git lets you ignore those files by assuming they are unchanged. This is done by running the git update-index --assume-unchanged path/to/file.txt command. Once marking a file as such, git will completely ignore any changes on that file; they will not show up when running git status or git diff, nor will they ever be committed.

Hence, not deleting it, but ignoring changes to it forever. I think this only works locally, so co-workers can still see changes to it unless they run the same command as above. (Still need to verify this though.)

Note: This isn't answering the question directly, but is based on follow up questions in the comments of the other answers.

If you want to just untrack a file and not delete from local and remote repo then use this command:

Ignore the files, remove the files from git, update git (for the removal).

Note : this does not deal with history for sensitive information.

This process definitely takes some undertanding of what is going on with git. Over time, having gained that, I've learned to do processes such as:

3) Add and commit that change (essentially this is a change to "add" deleting stuff, despite the otherwise confusing "add" command!)

Above answers didn't work for me. I used filter-branch to remove all committed files.

Remove a file from a git repository with:

Remove a folder from a git repository with:

This removes the directory or file from all the commits.

You can specify a commit by using:

To push everything to remote, you can do:

I would like to add to the accepted answer of @bdonlan.

DON'T USE THIS ANSWER TO REMOVE FILE(S) THAT EXISTS ON REMOTE.

What the answer is supposed to do?

It is supposed to remove some files from the local staged area that you have mistakenly committed in some previous commit(s).

It moves files from Tracked 𝐭𝐨 Untracked state by that what I mean is, it deletes the files and adds them again.

So, git doesn't know about them anymore.

What could go wrong?

This depends on what you mean by 'remove' from git. :)

You can unstage a file using git rm --cached see for more details. When you unstage something, it means that it is no longer tracked, but this does not remove the file from previous commits.

If you want to do more than unstage the file, for example to remove sensitive data from all previous commits you will want to look into filtering the branch using tools like the BFG Repo-Cleaner.

since rm --cache will delete files in the remote repository, you could use update-index instead
see: https://learn.microsoft.com/en-us/azure/devops/repos/git/ignore-files?view=azure-devops&tabs=visual-studio-2019

407
How do I git rm a file without deleting it from disk?
26
How to delete a file in remote repository ONLY?
3
How to remove a file from git repository without deleting the file actually
2
Remove an ignored directory from Github
1
Remove folder in git repo?
1577
How do I remove a directory from a Git repository?
935
How to ignore certain files in Git
579
Applying .gitignore to committed files
371
Accidentally committed .idea directory files into git
404
How do I add Git submodule to a sub-directory?
See more linked questions