How to replace all occurrences of a string in JavaScript

I have this string in my JavaScript code:

Seems to only remove the first occurrence of abc in the string above.

How can I replace all occurrences of it?

javascript string replace
Share
Improve this question
edited May 16 '21 at 10:51

As of August 2020: Modern browsers have support for the String.replaceAll() method defined by the ECMAScript 2021 language specification.

Here is how this answer evolved:

In response to comment "what's if 'abc' is passed as a variable?":

Note: Regular expressions contain special (meta) characters, and as such it is dangerous to blindly pass an argument in the find function above without pre-processing it to escape those characters. This is covered in the Mozilla Developer Network's JavaScript Guide on Regular Expressions, where they present the following utility function (which has changed at least twice since this answer was originally written, so make sure to check the MDN site for potential updates):

So in order to make the replaceAll() function above safer, it could be modified to the following if you also include escapeRegExp:

For the sake of completeness, I got to thinking about which method I should use to do this. There are basically two ways to do this as suggested by the other answers on this page.

Not knowing too much about how regular expressions work behind the scenes in terms of efficiency, I tended to lean toward the split and join implementation in the past without thinking about performance. When I did wonder which was more efficient, and by what margin, I used it as an excuse to find out.

Check out this benchmark running these two implementations against each other.

MDN also provides an implementation to escape our strings. It would be nice if this was also standardized as RegExp.escape(str), but alas, it does not exist:

We could call escapeRegExp within our String.prototype.replaceAll implementation, however, I'm not sure how much this will affect the performance (potentially even for strings for which the escape is not needed, like all alphanumeric strings).

Update: In the latest versions of most popular browsers, you can use replaceAll as shown here:

But check Can I use or another compatibility table first to make sure the browsers you're targeting have added support for it first.

For Node and compatibility with older/non-current browsers:

Note: Don't use the following solution in performance critical code.

As an alternative to regular expressions for a simple literal string, you could use

The general pattern is

This used to be faster in some cases than using replaceAll and a regular expression, but that doesn't seem to be the case anymore in modern browsers.

If you have a performance critical use case (e.g processing hundreds of strings), use the Regexp method. But for most typical use cases, this is well worth not having to worry about special characters.

Using a regular expression with the g flag set will replace all:

Here's a string prototype function based on the accepted answer:

If your find will contain special characters then you need to escape them:

It's somewhat late for an update, but since I just stumbled on this question, and noticed that my previous answer is not one I'm happy with. Since the question involved replacing a single word, it's incredible nobody thought of using word boundaries (\b)

This is a simple regex that avoids replacing parts of words in most cases. However, a dash - is still considered a word boundary. So conditionals can be used in this case to avoid replacing strings like cool-cat:

Basically, this question is the same as the question here: Javascript replace " ' " with " '' "

@Mike, check the answer I gave there... regexp isn't the only way to replace multiple occurrences of a subsrting, far from it. Think flexible, think split!

Alternatively, to prevent replacing word parts -which the approved answer will do, too! You can get around this issue using regular expressions that are, I admit, somewhat more complex and as an upshot of that, a tad slower, too:

The output is the same as the accepted answer, however, using the /cat/g expression on this string:

Oops indeed, this probably isn't what you want. What is, then? IMHO, a regex that only replaces 'cat' conditionally. (ie not part of a word), like so:

My guess is, this meets your needs. It's not fullproof, of course, but it should be enough to get you started. I'd recommend reading some more on these pages. This'll prove useful in perfecting this expression to meet your specific needs.

Given that this question still gets a lot of views, I thought I might add an example of .replace used with a callback function. In this case, it dramatically simplifies the expression and provides even more flexibility, like replacing with correct capitalisation or replacing both cat and cats in one go:

Match against a global regular expression:

For replacing a single time use:

For replacing multiple times use:

These are the most common and readable methods.

Or try the replaceAll method, as recommended in this answer:

The replaceAll method is added to String's prototype. This means it will be available for all string objects/literals.

Using RegExp in JavaScript could do the job for you, just simply do something like below code, don't forget the /g after which standout for global:

If you think of reuse, create a function to do that for you, but it's not recommended as it's only one line function, but again if you heavily use this, you can write something like this:

and simply use it in your code over and over like below:

But as I mention earlier, it won't make a huge difference in terms of lines to be written or performance, only caching the function may effect some faster performance on long strings and also a good practice of DRY code if you want to reuse.

Say you want to replace all the 'abc' with 'x':

I was trying to think about something more simple than modifying the string prototype.

Use a regular expression:

I also create my own solution. It looks like currently it is the shortest one which does the question job: 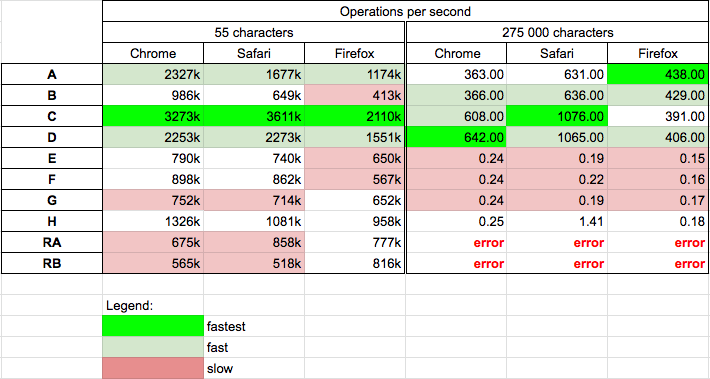 You can run tests on your machine HERE. Results for Chrome:

For 1M characters they even break Chrome

I try to perform tests for 1M characters for other solutions, but E,F,G,H takes so much time that browser ask me to break script so I shrink test string to 275K characters. You can run tests on your machine HERE. Results for Chrome 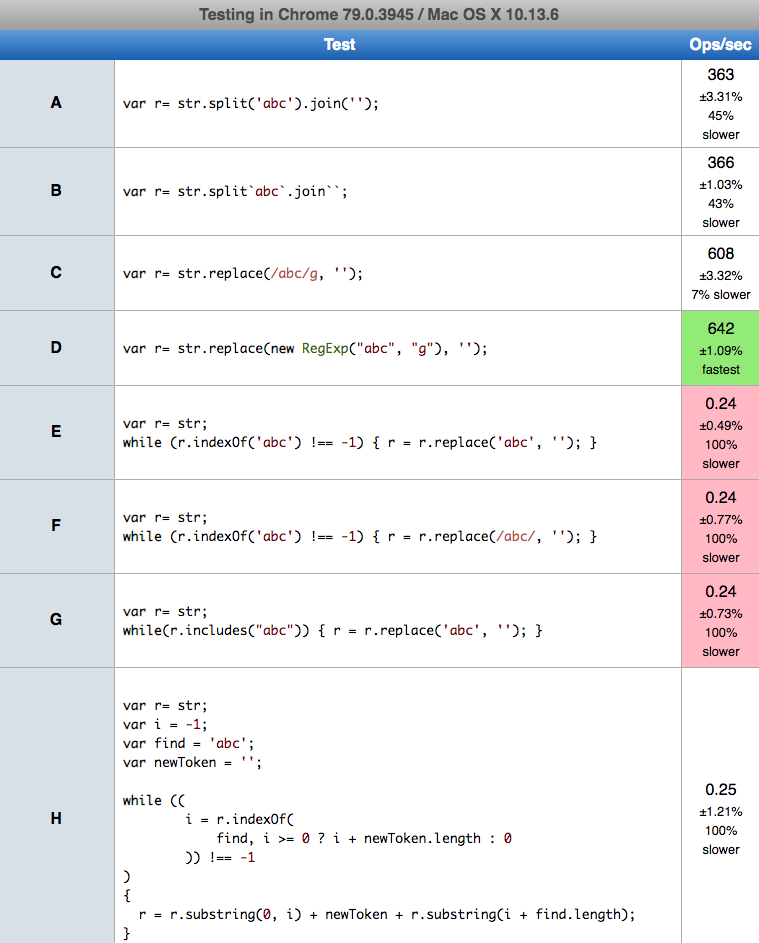 worked better for me than the above answers. so new RegExp("abc", 'g') creates a RegExp what matches all occurence ('g' flag) of the text ("abc"). The second part is what gets replaced to, in your case empty string (""). str is the string, and we have to override it, as replace(...) just returns result, but not overrides. In some cases you might want to use that.

This is the fastest version that doesn't use regular expressions.

It is almost twice as fast as the split and join method.

As pointed out in a comment here, this will not work if your omit variable contains place, as in: replaceAll("string", "s", "ss"), because it will always be able to replace another occurrence of the word.

There is another jsperf with variants on my recursive replace that go even faster (http://jsperf.com/replace-all-vs-split-join/12)!

Loop it until number occurrences comes to 0, like this:

If what you want to find is already in a string, and you don't have a regex escaper handy, you can use join/split:

I like this method (it looks a little cleaner):

The simplest way to this without using any regex is split and join like the code here:

If the string contain similar pattern like abccc, you can use this:

The previous answers are way too complicated. Just use the replace function like this:

As of August 2020 there is a Stage 4 proposal to ECMAScript that adds the replaceAll method to String.

The usage is the same as the replace method:

It's supported in most modern browsers, but there exist polyfills:

It is supported in the V8 engine behind an experimental flag --harmony-string-replaceall. Read more on the V8 website.

If you are trying to ensure that the string you are looking for won't exist even after the replacement, you need to use a loop.

When complete, you will still have 'test abc'!

The simplest loop to solve this would be:

But that runs the replacement twice for each cycle. Perhaps (at risk of being voted down) that can be combined for a slightly more efficient but less readable form:

This can be particularly useful when looking for duplicate strings.
For example, if we have 'a,,,b' and we wish to remove all duplicate commas.
[In that case, one could do .replace(/,+/g,','), but at some point the regex gets complex and slow enough to loop instead.]

Although people have mentioned the use of regex but there's a better approach if you want to replace the text irrespective of the case of the text. Like uppercase or lowercase. Use below syntax

You can refer the detailed example here.

The new String.prototype.replaceAll() method returns a new string with all matches of a pattern replaced by a replacement. The pattern can be either a string or a RegExp, and the replacement can be a string or a function to be called for each match.

Not the answer you're looking for? Browse other questions tagged javascript string replace or ask your own question.

7122
What is the difference between String and string in C#?
7625
How do JavaScript closures work?
3092
How can I convert a string to boolean in JavaScript?
3177
Convert bytes to a string
3310
How do I loop through or enumerate a JavaScript object?
3521
Sort array of objects by string property value
8090
What does "use strict" do in JavaScript, and what is the reasoning behind it?
7417
How to check whether a string contains a substring in JavaScript?
4313
Why does Google prepend while(1); to their JSON responses?
5258
For-each over an array in JavaScript