I have a small question about IntelliJ IDEA 11. I just imported a project from subversion - its a maven project. But I have a problem in maven library dependencies so that I can't include all maven dependencies automatically - IDEA shows dependency errors only when I open that class/ Thats what I get here: 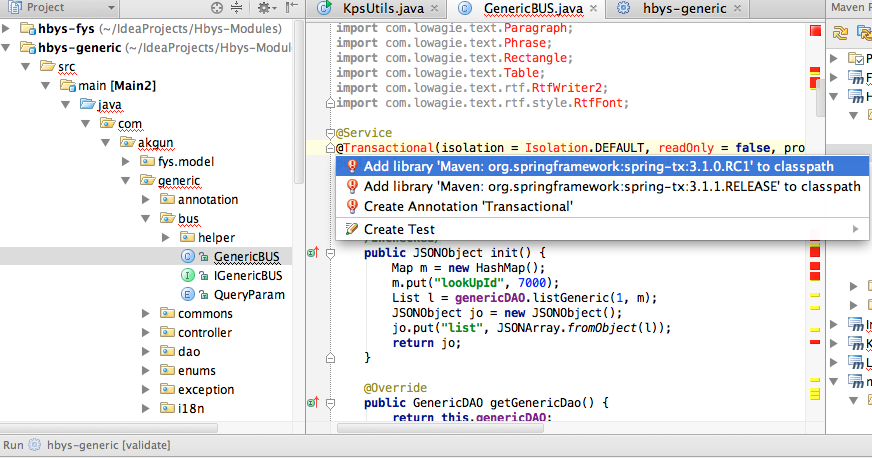 So I want all dependencies to be added automatically - is that possible or do I have to go through all class files to identify and add maven dependencies?!

UPDATE: After doing some modifications I found how to resolve my problem in some way. Thats what I did: 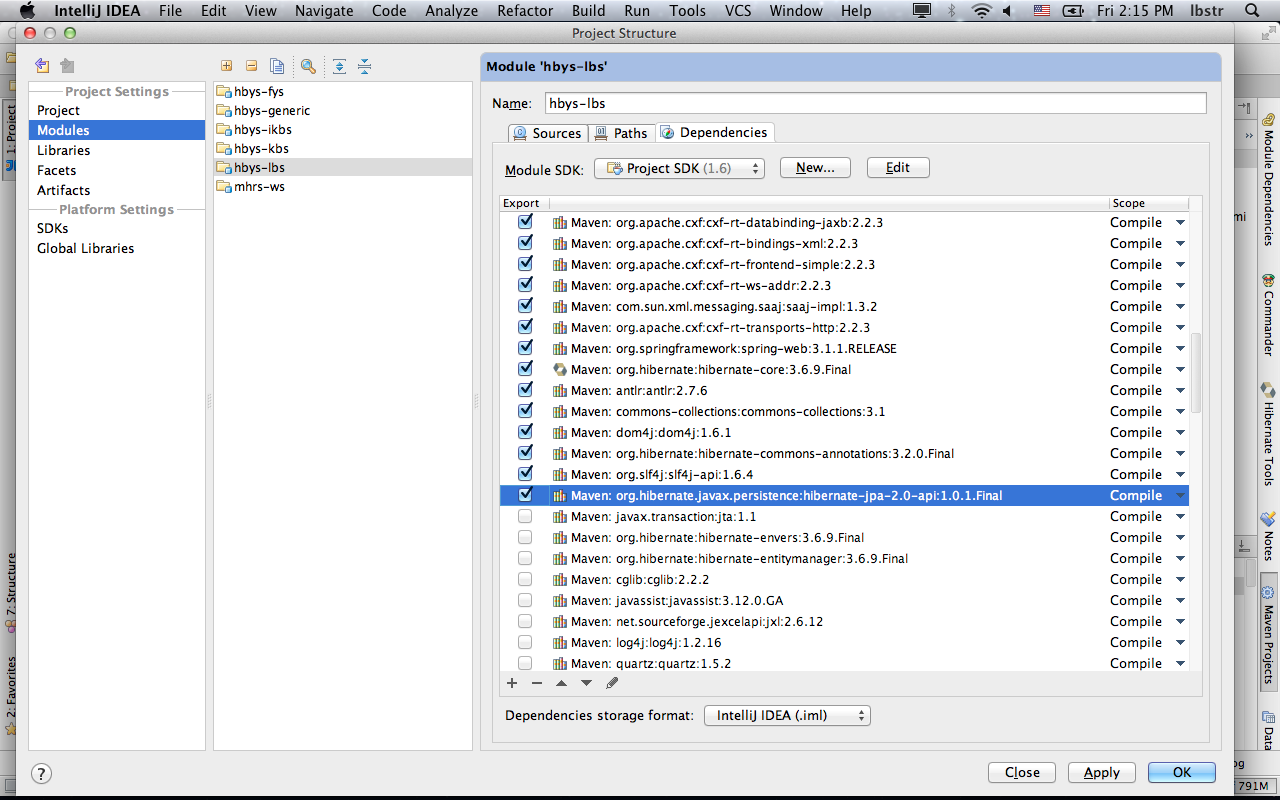 but I think logically it will not include and check new dependencies ahead?!... Is there any settings area for this in intelliJ - auto export dependencies to classpath ?!

IntelliJ should download and add all your dependencies to the project's classpath automatically as long as your POM is compliant and all the dependencies are available.

When importing Maven projects into IntelliJ an information box usually comes up asking you if you want to configure Auto-Import for Maven projects. That means that if you make any changes to your POM those changes will be loaded automatically.

You can enable such feature going to File > Settings > Maven > Importing, there is a checkbox that says "Import Maven projects automatically".

If that doesn't help, then I would suggest to make a full clean-up and start again:

ref: http://youtrack.jetbrains.com/issue/IDEA-98425 (which may have a few other ideas too)

Ran into this again, with IntelliJ 15 this time, which has no "use maven3 to import" option available anymore. The cause was that sometimes IntelliJ "doesn't parse maven dependencies right" and if it can't parse one of them right, it gives up on all of them, apparently. You can tell if this is the case by opening the maven projects tool window (View menu -> Tool Windows -> Maven Projects). Then expand one of your maven projects and its dependencies. If the dependencies are all underlined in red, "Houston, we have a problem".

You can actually see the real failure by mousing over the project name itself. 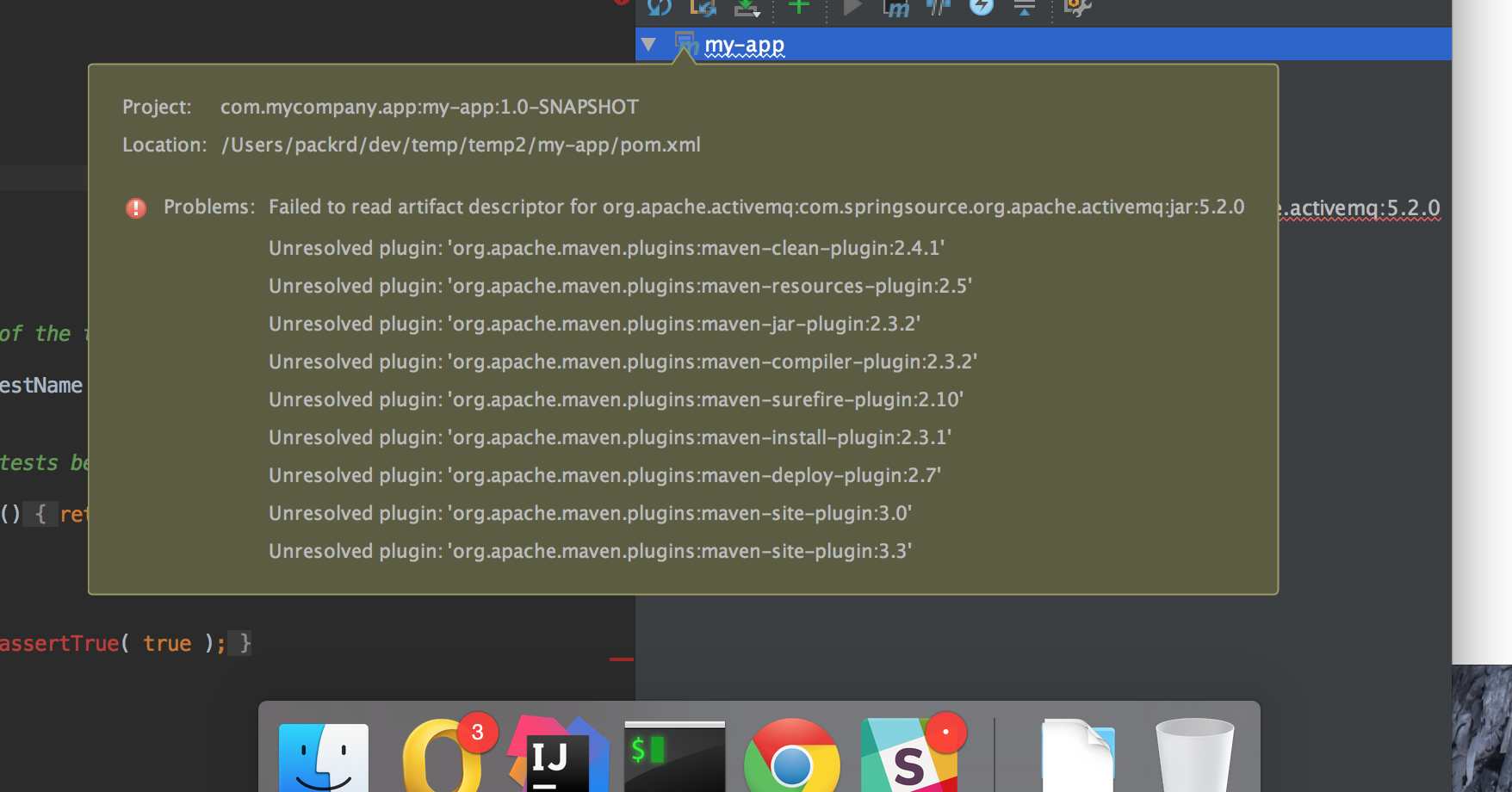 It seems in this case I was dealing with a jar that didn't have an associated pom file (in our maven nexus repo, and also my local repository). If this is also your problem, "urrent work around: if you do not actually need to use classes from that jar in your own code (for instance a transitive maven dependency only), you can actually get away with commenting it out from the pom (temporarily), maven project reload, and then uncomment it. Somehow after that point IntelliJ "remembers" its old working dependencies. Adding a maven transitive exclude temporarily might also do it, if you're running into it from transitive chain of dependencies."

Another thing that might help is to use a "newer version" of maven than the bundled 3.0.5. In order to set it up to use this as the default, close all your intellij windows, then open preferences -> build, execution and deployment -> build tools -> maven, and change the maven home directory, it should say "For default project" at the top when you adjust this, though you can adjust it for a particular project as well, as long as you "re import" after adjusting it.

Deleting your intellij cache folders (windows: HOMEPATH/.{IntellijIdea,IdeaC}XXX linux ~/.IdeaIC15) and/or uninstalling and reinstalling IntelliJ itself. This can also be done by going to File [menu] -> Invalidate Caches / Restart.... Click invalidate and restart. This will reindex your whole project and solve many hard-to-trace issues with IntelliJ.

When importing the project, select pom.xml instead of the project directory. It should work.

Try to Re-Import the project from the Maven Projects panel in IntelliJ IDEA. It should download and configure all the dependencies defined in your pom.xml automatically.

If download doesn't work from IDEA for some reason, try mvn install from the command line and see if the dependencies can be fetched.

Of course all the required dependencies and any custom repositories must be defined directly in the pom.xml file.

In the newly revealed toolbar, select Maven settings (icon of a toolset).

When this screen opens, expand the Maven menu and click 'Importing'

Here, click "Import Maven projects automatically." Also ensure that the 'JDK for Importer' option matches the JDK version you mean to use.

Click OK. Now go to the red dependency in your pom.xml, select the red lightbulb, and click 'Update Maven indices'.

Specify "Maven home directory" - the place you installed the maven

If certain maven modules are not compiling check if their pom.xml is on the "ignored files" list. In IntelliJ goto

and check if the related pom.xml is ignored.

I had the same issue and tried all the answers mentioned here, none worked.

The simple solution is go to your project folder and delete all the .idea and .iml files and restart the IntelliJ ide. It works. No need to do anything with the settings. 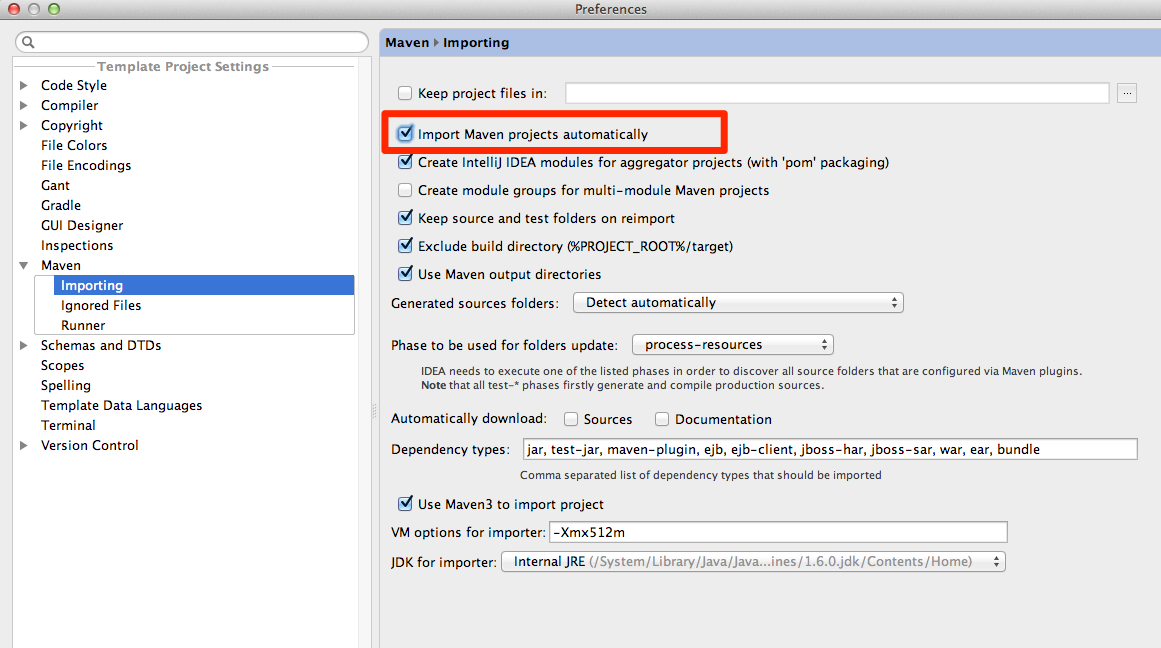 When you create a new project you simply need to choose the option:

You'll find it pretty straight forward from there.
And in your case you can close your project and simply create a new one. Choose your project's directory, which will override it, making it a Maven project.

Importing Maven dependencies may not work if you import the same path several times. This may happen automatically after importing an existing maven project. I can't figure out why this happens, so I'm inclined to think it is a bug.

For example, if my project is

the three paths may be imported as top nodes:

If such is the case, the dependencies appear to be right, but they won't be used until you remove the superfluous paths (in this case, src/main and src/test). Once you do this, refresh and click Build > Rebuild Project. IDEA will pick up the dependencies.

A symptom of this problem is that IDEA warns you of a duplicated path when you manually check a library (second screenshot in the question).

There are several ways to re-read the dependencies in case you need it. If you go to the “Maven Projects” tab, there is a “Reimport All Maven Projects” icon at the top left of the tab. If you suspect IDEA became confused you can click on File > Invalidate Caches.

Go into your project structure, under project Settings, Modules, select the dependencies table. For each dependency, change the scope from 'Test' to 'Compile'.

If in the lower right corner it says "2 processes running..." or similar, you may just need to wait for that to finish, since it may take time to download all the jars.

Reimport the project. If you install maven plugin you can use this.

I had a similar issue, in my case I am using a custom settings.xml which was not picked from IntelliJ.

I ran into the problem that some subdependencies couldn't be resolved in IntelliJ 2016.3.X. This could be fixed by changing the Maven home directory in Settings > Build, Execution, Deployment > Build Tools > Maven from Bundled (Maven 3) to /usr/share/maven.

After that all subdependencies got resolved as in previous IntelliJ versions.

So I was also facing this problem in lots of my organisation's codebase. On addition to the answers suggested above, we can tweak around with the allocation pool memory of the jvm. This is because, the volume of the dependencies brought in large codebases may be overwhelming for the jvm for IDE to build the project completely. Hence tried increasing XMX value and it worked! Added -Xmx3072 to resolve the issue of "not building" my Java project in IntelliJ 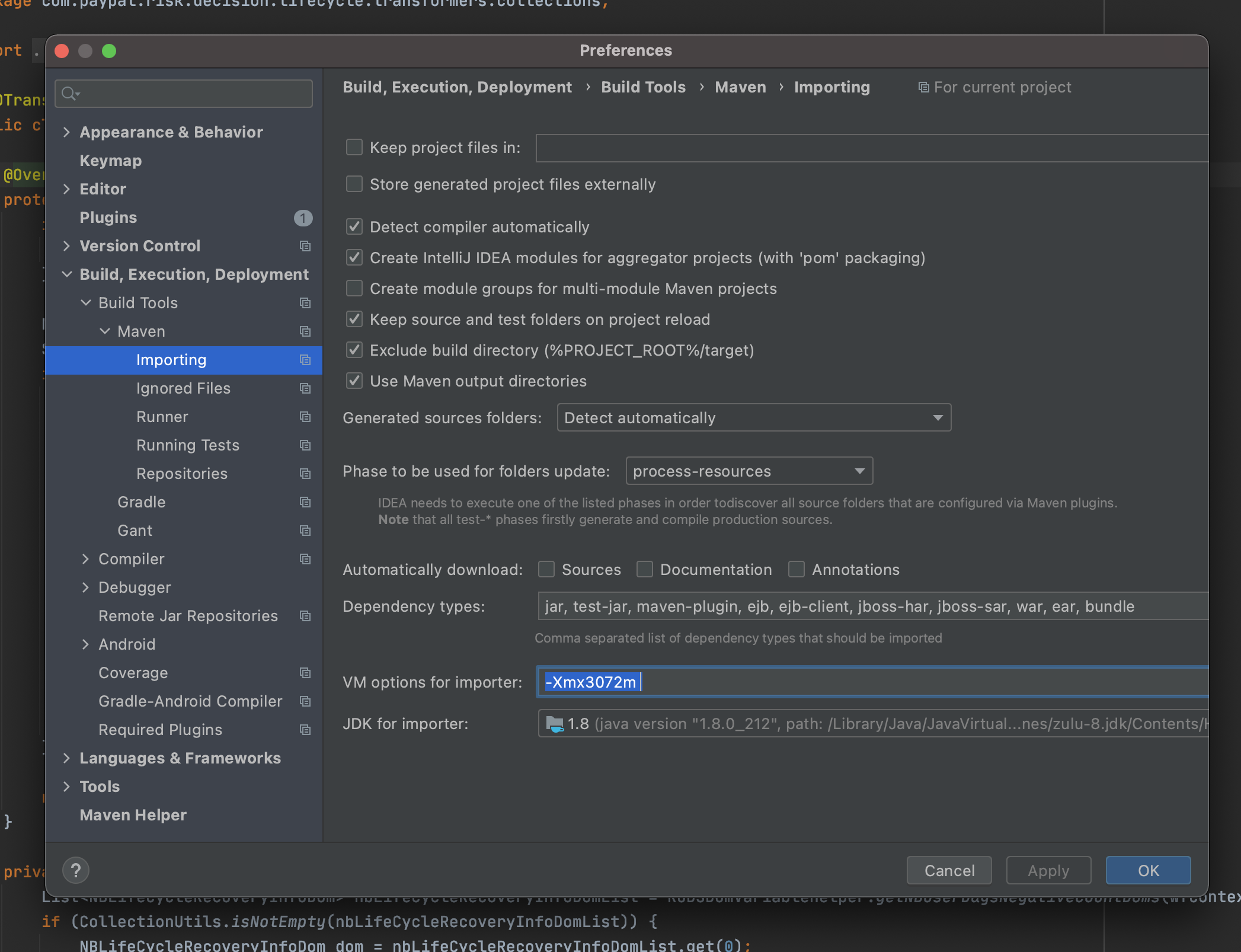 Maven - Reimport did not work for me. I have Spring project in STS(Eclipse) and my solution is to import project to IDEA like so:

After this it has imported everything.

I had the similar issue with my macbook, just did a small change in pom.xml and it started downloading all dependencies:

Earlier dependencies were written as below for my windows machine:

I am not sure it will work for you or not.. but worked fine for me.

Deleting the .idea folder from the project directory, and then re-importing the project as a Maven project is what worked for me.

In my case, path for JAVA used by MAVEN was not set as JAVA_HOME as configured on the machine. Hence, it was not even trying to download the dependencies. Steps I followed which solved this issue,

Invalidate Caches worked for me:

Then Invalidate and Restart

I solved this issue by updating my settings.xml file with correct mirror config, seems that intellij will try to download meta-data from repository every time the maven module imported.

Hijacking a bit to add what ended up working for me:

Go into the Maven Projects sidebar on the right edge of the IDE, and verify that your dependencies are listed correctly under your module there. Assuming they are, just ask IDEA to reimport then (the first button at the top, looks like two blue arrows forming a counter-clockwise circle).

Once I did that, and let IDEA reload the project for me, all my dependencies were magically understood.

I faced the same problem and tried everything suggested which did not solve the issue, I was using Intellij version 13.1.3

Finally after spending more than couple of hours trying to fix it, I decided to try an upgraded version and opened the project in version 14.1.4 which ultimately resolved the issue. I would think this as a probable bug in the previous version.

I was able to resolve it by removing unnecessary modules from Project Settings -> Modules list. 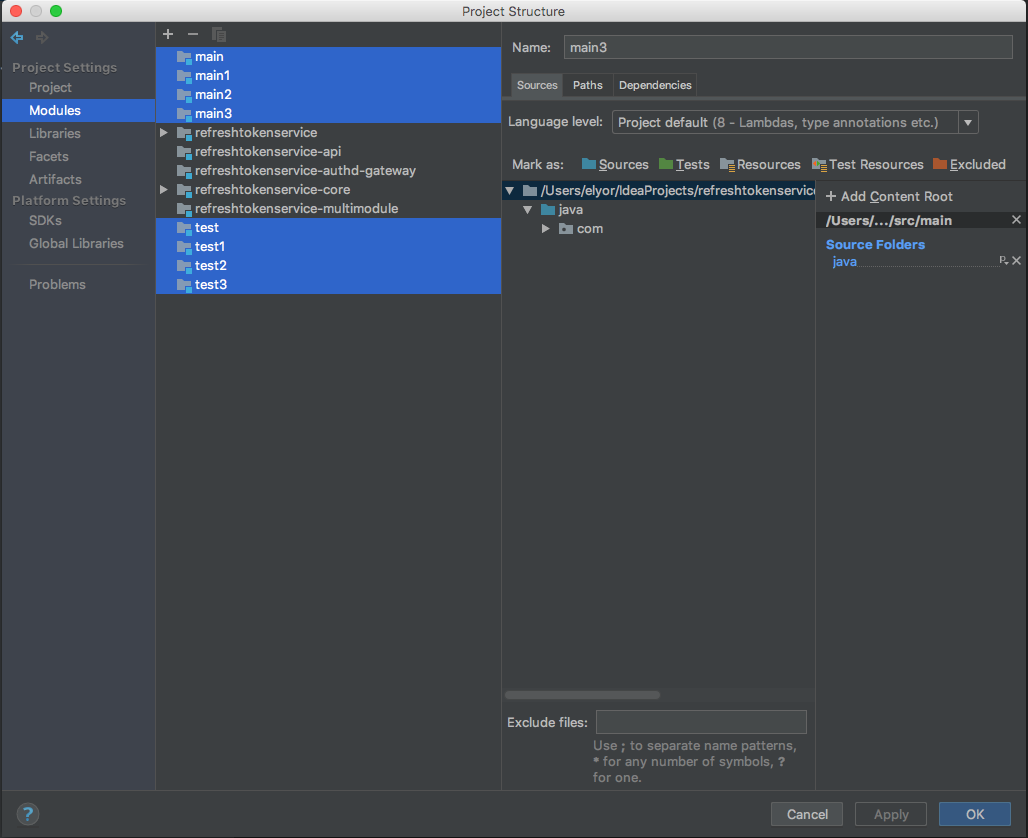 In my case, one of the modules was ignored for some reason. To resolve that: Right click the problematic module and choose "Unignore Projects". 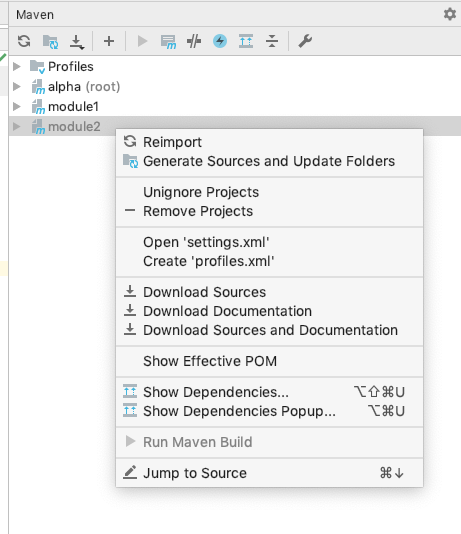 You might be working under a company's internal network.

If so, to download or add external Maven dependencies your settings.xml file under user/<username>/.m2 folder might need to be updated.

Contact your administrator to provide the right settings.xml file and then paste it into you .m2 folder.

This one did it for me.

Change "Reload project after changes in the build scripts":

With this, it took a while for the project to rebuild but now I can see Maven dependencies in IntelliJ:

Not the answer you're looking for? Browse other questions tagged java maven intellij-idea maven-3 or ask your own question.

1379
How can I permanently enable line numbers in IntelliJ?
2741
How can I create an executable JAR with dependencies using Maven?
864
Correct way to add external jars (lib/*.jar) to an IntelliJ IDEA project
491
Maven Modules + Building a Single Specific Module
417
Including dependencies in a jar with Maven
972
Differences between dependencyManagement and dependencies in Maven
716
IntelliJ inspection gives "Cannot resolve symbol" but still compiles code
443
IntelliJ: Working on multiple projects
365
Force Intellij IDEA to reread all maven dependencies
786
Dealing with "Xerces hell" in Java/Maven?