But right now it's splitting out everything that's in the double-quotes, which is incorrect.

Edit: Okay sorry I worded this question really poorly. I'm being given a string not an array.

And I want to turn that into an array using something like the "split" function.

Here's what I would do.

Here is a JavaScript function to do it:

Here's a non-regex one that assumes doublequotes will come in pairs:

Proof: https://regex101.com/r/UL8kyy/3/tests (Note: currently only works in Chrome because the regex uses lookbehinds which are only supported in ECMA2018)

According to our guidelines it avoids non-capturing groups and greedy matching.

I'm sure it can be simplified, I'm open to suggestions / additional test cases.

For anyone interested, the first part matches double-quoted, comma-delimited arguments:

And the second part matches comma-delimited arguments by themselves:

This works well for me. (I used semicolons so the alert message would show the difference between commas added when turning the array into a string and the actual captured values.) 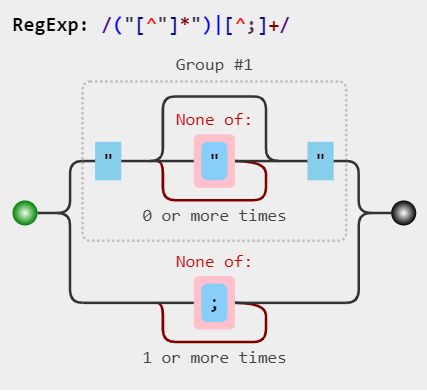 I almost liked the accepted answer, but it didn't parse the space correctly, and/or it left the double quotes untrimmed, so here is my function:

Parse any CSV or CSV-String code based on TYPESCRIPT

As a side note, it will work both with, and without the braces in the start and end.

This takes a csv file one line at a time and spits back an array with commas inside speech marks intact. if there are no speech marks detected it just .split(",")s as normal... could probs replace that second loop with something but it does the job as is

Use the npm library csv-string to parse the strings instead of split: https://www.npmjs.com/package/csv-string

This will handle the empty entries

Something like a stack should do the trick. Here I vaguely use marker boolean as stack (just getting my purpose served with it).

The code works if your input string in the format of stringTocompare. Run the code on https://jsfiddle.net/ to see output for fiddlejs setting. Please refer to the screenshot. You can either use split function for the same for the code below it and tweak the code according to you need. Remove the bold or word with in ** from the code if you dont want to have comma after split attach=attach**+","**+actualString[t+1].

I solved this with a simple parser.

It simply goes through the string char by char, splitting off a segment when it finds the split_char (e.g. comma), but also has an on/off flag which is switched by finding the encapsulator_char (e.g. quote). It doesn't require the encapsulator to be at the start of the field/segment (a,b","c,d would produce 3 segments, with 'b","c' as the second), but it should work for a well formed CSV with escaped encapsulator chars.

this works as long as quotes always come on the outside of values that contain the commas that need to be excluded (i.e. a csv file).

Edit: As Rocket pointed out, strict mode removes eval's ability to inject variables into the local scope, meaning you'd want to do this:

I've had similar issues with this, and I've found no good .net solution so went DIY. NOTE: This was also used to reply to

but seems more applicable here (but useful over there)

In my application I'm parsing a csv so my split credential is ",". this method I suppose only works for where you have a single char split argument.

So, I've written a function that ignores commas within double quotes. it does it by converting the input string into a character array and parsing char by char

This function, to my application taste also ignores ("") in any input as these are unneeded and present in my input.

2227
When should I use double or single quotes in JavaScript?
705
How do I split a string with multiple separators in JavaScript?
2407
How do I chop/slice/trim off last character in string using Javascript?
277
Java: splitting a comma-separated string but ignoring commas in quotes
749
How to remove spaces from a string using JavaScript?
54
Split string on commas but ignore commas within double-quotes?
337
I want to remove double quotes from a String
1
Split the string using comma but ignore the comma within double quotes - javascript
0
Repost - JavaScrpt split line Regex - 'double quote' inside 'double-quotes'