I am implementing a 3D engine for spatial visualisation, and am writing a camera with the following navigation features:

The camera is not supposed to roll - that is, 'up' remains up. Because of this I represent the camera with a location and two angles, rotations around the X and Y axes (Z would be roll.) The view matrix is then recalculated using the camera location and these two angles. This works great for pan and rotating the eye, but not for rotating around an arbitrary point. Instead I get the following behaviour:

(a) What is causing this 'drift' in rotation?

This may be gimbal lock. If so, the standard answer to this is 'use quaternions to represent rotation', said many times here on SO (1, 2, 3 for example), but unfortunately without concrete details (example. This is the best answer I've found so far; it's rare.) I've struggled to implemented a camera using quaternions combining the above two types of rotations. I am, in fact, building a quaternion using the two rotations, but a commenter below said there was no reason - it's fine to immediately build the matrix.

This occurs when changing the X and Y rotations (which represent the camera look direction) when rotating around a point, but does not occur simply when directly changing the rotations, i.e. rotating the camera around itself. To me, this doesn't make sense. It's the same values.

(b) Would a different approach (quaternions, for example) be better for this camera? If so, how do I implement all three camera navigation features above?

If a different approach would be better, then please consider providing a concrete implemented example of that approach. (I am using DirectX9 and C++, and the D3DX* library the SDK provides.) In this second case, I will add and award a bounty in a couple of days when I can add one to the question. This might sound like I'm jumping the gun, but I'm low on time and need to implement or solve this quickly (this is a commercial project with a tight deadline.) A detailed answer will also improve the SO archives, because most camera answers I've read so far are light on code.

Thanks for your help :)

Thanks for the comments and answer so far! I'll try to clarify a few things about the problem:

add another rotation onto your transform that rotates the eyePos to be completely in the y-z plane before you apply the transformation, and then another rotation that moves it back afterward. Rotate around the y axis by the following angle immediately before and after applying the yaw-pitch-roll matrix (one of the angles will need to be negated; trying it out is the fastest way to decide which). double fixAngle = atan2(oEyeTranslated.z,oEyeTranslated.x);

Unfortunately, when implementing this as described, my eye shoots off above the scene at a very fast rate due to one of the rotations. I'm sure my code is simply a bad implementation of this description, but I still need something more concrete. In general, I find unspecific text descriptions of algorithms are less useful than commented, explained implementations. I am adding a bounty for a concrete, working example that integrates with the code below (i.e. with the other navigation methods, too.) This is because I would like to understand the solution, as well as have something that works, and because I need to implement something that works quickly since I am on a tight deadline.

Please, if you answer with a text description of the algorithm, make sure it is detailed enough to implement ('Rotate around Y, then transform, then rotate back' may make sense to you but lacks the details to know what you mean. Good answers are clear, signposted, will allow others to understand even with a different basis, are 'solid weatherproof information boards.')

In turn, I have tried to be clear describing the problem, and if I can make it clearer please let me know.

To implement the above three navigation features, in a mouse move event moving based on the pixels the cursor has moved:

And to generate the view matrix from this:

It seems to me that "Roll" shouldn't be possible given the way you form your view matrix. Regardless of all the other code (some of which does look a little funny), the call D3DXMatrixLookAtLH(&m_oViewMatrix, &oEyePos, &oTarget, &oUpVector); should create a matrix without roll when given [0,1,0] as an 'Up' vector unless oTarget-oEyePos happens to be parallel to the up vector. This doesn't seem to be the case since you're restricting m_dRotationY to be within (-.49pi,+.49pi).

Perhaps you can clarify how you know that 'roll' is happening. Do you have a ground plane and the horizon line of that ground plane is departing from horizontal?

As an aside, in UpdateView, the D3DXQuaternionRotationYawPitchRoll seems completely unnecessary since you immediately turn around and change it into a matrix. Just use D3DXMatrixRotationYawPitchRoll as you did in the mouse event. Quaternions are used in cameras because they're a convenient way to accumulate rotations happening in eye coordinates. Since you're only using two axes of rotation in a strict order, your way of accumulating angles should be fine. The vector transformation of (0,0,1) isn't really necessary either. The oRotationMatrix should already have those values in the (_31,_32,_33) entries.

Given that it's not roll, here's the problem: you create a rotation matrix to move the eye in world coordinates, but you want the pitch to happen in camera coordinates. Since roll isn't allowed and yaw is performed last, yaw is always the same in both the world and camera frames of reference. Consider the images below: 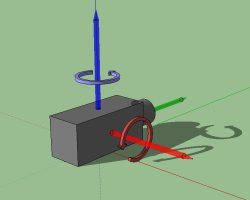 Your code works fine for local pitch and yaw because those are accomplished in camera coordinates. 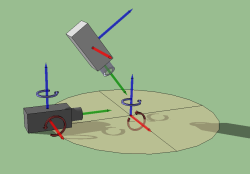 But when you rotate around a reference point, you are creating a rotation matrix that is in world coordinates and using that to rotate the camera center. This works okay if the camera's coordinate system happens to line up with the world's. However, if you don't check to see if you're up against the pitch limit before you rotate the camera position, you will get crazy behavior when you hit that limit. The camera will suddenly start to skate around the world--still 'rotating' around the reference point, but no longer changing orientation.

If the camera's axes don't line up with the world's, strange things will happen. In the extreme case, the camera won't move at all because you're trying to make it roll. 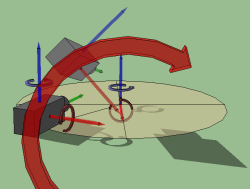 The above is what would normally happen, but since you handle the camera orientation separately, the camera doesn't actually roll. 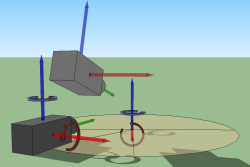 Instead, it stays upright, but you get strange translation going on.

One way to handle this would be to (1)always put the camera into a canonical position and orientation relative to the reference point, (2)make your rotation, and then (3)put it back when you're done (e.g., similar to the way that you translate the reference point to the origin, apply the Yaw-Pitch rotation, and then translate back). Thinking more about it, however, this probably isn't the best way to go.

I think that Generic Human's answer is probably the best. The question remains as to how much pitch should be applied if the rotation is off-axis, but for now, we'll ignore that. Maybe it'll give you acceptable results.

The essence of the answer is this: Before mouse movement, your camera is at c1 = m_oEyePos and being oriented by M1 = D3DXMatrixRotationYawPitchRoll(&M_1,m_dRotationX,m_dRotationY,0). Consider the reference point a = m_oRotateAroundPos. From the point of view of the camera, this point is a'=M1(a-c1).

You want to change the orientation of the camera to M2 = D3DXMatrixRotationYawPitchRoll(&M_2,m_dRotationX+dX,m_dRotationY+dY,0). [Important: Since you won't allow m_dRotationY to fall outside of a specific range, you should make sure that dY doesn't violate that constraint.] As the camera changes orientation, you also want its position to rotate around a to a new point c2. This means that a won't change from the perspective of the camera. I.e., M1(a-c1)==M2(a-c2).

So we solve for c2 (remember that the transpose of a rotation matrix is the same as the inverse):

@Generic Human deserves credit for the answer, but here's code for it. Of course, you need to implement the function to validate a change in pitch before it's applied, but that's simple. This code probably has a couple typos since I haven't tried to compile:

I think there is a much simpler solution that lets you sidestep all rotation issues.

As an added bonus, the rotation behavior is now consistent between "eye rotation" and "point rotation" mode.

You rotate around the point by repeatedly applying small rotation matrices, this probably cause the drift (small precision errors add up) and I bet you will not really do a perfect circle after some time. Since the angles for the view use simple 1-dimension double, they have much less drift.

A possible fix would be to store a dedicated yaw/pitch and relative position from the point when you enter that view mode, and using those to do the math. This requires a bit more bookkeeping, since you need to update those when moving the camera. Note that it will also make the camera move if the point move, which I think is an improvement.

If I understand correctly, you are satisfied with the rotation component in the final matrix (save for inverted rotation controls in the problem #3), but not with the translation part, is that so?

The problem seems to come from the fact that you treating them differently: you are recalculating the rotation part from scratch every time, but accumulate the translation part (m_oEyePos). Other comments mention precision problems, but it's actually more significant than just FP precision: accumulating rotations from small yaw/pitch values is simply not the same---mathematically---as making one big rotation from the accumulated yaw/pitch. Hence the rotation/translation discrepancy. To fix this, try recalculating eye position from scratch simultaneously with the rotation part, similarly to how you find "oTarget = oEyePos + ...":

dist can be fixed or calculated from the old eye position. That will keep the rotation point in the screen center; in the more general case (which you are interested in), -dist * oForward here should be replaced by the old/initial m_oEyePos - m_oRotateAroundPos multiplied by the old/initial camera rotation to bring it to the camera space (finding a constant offset vector in camera's coordinate system), then multiplied by the inverted new camera rotation to get the new direction in the world.

This will, of course, be subject to gimbal lock when the pitch is straight up or down. You'll need to define precisely what behavior you expect in these cases to solve this part. On the other hand, locking at m_dRotationX=0 or =pi is rather strange (this is yaw, not pitch, right?) and might be related to the above.

Not the answer you're looking for? Browse other questions tagged c++ math matrix directx quaternions or ask your own question.

1810
Why can templates only be implemented in the header file?
5
Rotating quaternions based on mouse movement (OpenGL and Java)
107
Why are quaternions used for rotations?
0
C++ OpenGl Camera rotation using Quaternion issue
1
Quaternion-Based-Camera unwanted roll
10
Quaternion based camera
3
How to use a pan gesture to rotate a camera in SceneKit using quaternions