How do negative margins in CSS work and why is (margin-top:-5 != margin-bottom:5)?

A common trick for vertical positioning elements is to use the following CSS:

When seen in the metric view as in Chrome this is what you see: 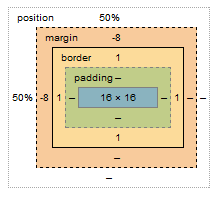 However, there is no visual margin depicted when you hover over the element i.e. the margin is 'outside' the border and can be visualized. But negative margins don't show up. How do they look and what is it that makes it different?

So just how do negative margins work and what's the intuition behind them. How do they 'bump up' (in case of margin-top < 0) an item?

Negative margins are valid in css and understanding their (compliant) behaviour is mainly based on the box model and margin collapsing. While certain scenarios are more complex, a lot of common mistakes can be avoided after studying the spec.

For instance, rendering of your sample code is guided by the css spec as described in calculating heights and margins for absolutely positioned non-replaced elements.

If I were to make a graphical representation, I'd probably go with something like this (not to scale): 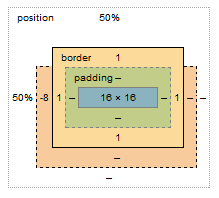 The margin box lost 8px on the top, however this does not affect the content & padding boxes. Because your element is absolutely positioned, moving the element 8px up does not cause any further disturbance to the layout; with static in-flow content that's not always the case.

Still need convincing that reading specs is the way to go (as opposed to articles like this)? I see you're trying to vertically center the element, so why do you have to set margin-top:-8px; and not margin-top:-50%;?

Well, vertical centering in CSS is harder than it should be. When setting even top or bottom margins in %, the value is calculated as a percentage always relative to the width of the containing block. This is rather a common pitfall and the quirk is rarely described outside of w3 docos

I'll try to explain it visually:

good points already made here, but while there is lots of information about how rendering of margins is accomplished by the browser, the why isn't quite answered yet:

what we also could ask is:

so what we see is that there is a difference in the rendering of margins depending on the side they are applied to - top (and left) margins are different from bottom (and right) ones.

things are becoming clearer when having a (simplified) look at how styles are applied by the browser: elements are rendered top-down in the viewport, starting in the top left corner (let's stick with the vertical rendering for now, keeping in mind that the horizontal one is treated the same).

analogous to their position in code, these three boxes appear stacked 'top-down' in the browser (keeping things simple, we won't consider here the order property of the css3 'flex-box' module). so, whenever styles are applied to box 3, preceding element's positions (for box 1 and 2) have already been determined, and shouldn't be altered any more for the sake of rendering speed.

now, imagine a top margin of -10px for box 3. instead of shifting up all preceding elements to gather some space, the browser will just push box 3 up, so it's rendered on top of (or underneath, depending on the z-index) any preceding elements. even if performance wasn't an issue, moving all elements up could mean shifting them out of the viewport, thus the current scrolling position would have to be altered to have everything visible again.

A margin-top of -8px means it will be 8px higher than if it had 0 margin.

A margin-bottom of 8px means that the thing below it will be 8px further down that if it had 0 margin.

Because you have used absolute positioning, and specified a top percentage, only margin-top will affect the location of your .item object. If instead you positioned it using bottom: 50%, then you'd need margin-bottom -8px to centre it, and margin-top would have no effect.

Margin affects the boundaries of an element in terms of positioning it, either absolutely as in your case, or relative to neighbouring elements. Imagine that margin is the foundations of your element on which it sits. They are typically the same size as it, but can be made larger or smaller on any or all of the four edges.

In your case, top 50% would result in the top of the element starting in the middle of the page. By applying a negative top margin, the browser uses the point 8px into the element from the top (ie the line across the middle of it) as the place to position at 50%.

If you apply a positive margin to the bottom, this extends the line the browser uses to position the bottom out away from the element itself, giving a gap between it and any adjacent element below, or affecting where it is placed absolutely if positioning based on the bottom.

I wonder if this question has been answered well: how css margins work and why is it that margin-top:-5; is not the same as margin-bottom:5;?

Basically that but affected by float'ed elements and the like: http://www.w3.org/TR/CSS2/box.html#margin-properties.

I stand to be corrected.

Just to phrase things differently from the great answers above, as that has helped me get an intuitive understanding of negative margins:

A negative margin on an element allows it to eat up the space of its parent container.

Adding a (positive) margin on the bottom doesn't allow the element to do that - it only pushes back whatever element is below.

0
About negative margin-bottom
0
How negative margin width affect float?
784
Using jQuery to center a DIV on the screen
2
Is it bad practice to use minus (-) pixels in CSS for margins?
2
how can i change the gap of only element
0
Remove unwanted padding at bottom of bootstrap static navbar
0
Make one p tag full width in a div with padding
0
Center number input as if there were no arrows
0
Using negative % margin not covering parent element
0
How to override the parents padding while adding a border bottom
See more linked questions

143
Why does CSS not support negative padding?
1982
How do CSS triangles work?
406
Why does this CSS margin-top style not work?
0
Negative margins questions and inconsistencies
0
Negative margin-top in IE is ignored
993
In CSS Flexbox, why are there no "justify-items" and "justify-self" properties?
1
background color of parent matching height of child with negative top and bottom margins
3
CSS Odd Behavior: min-height and margin collapse