I have run into an interesting limit with the App Engine datastore. I am creating a handler to help us analyze some usage data on one of our production servers. To perform the analysis I need to query and summarize 10,000+ entities pulled from the datastore. The calculation isn't hard, it is just a histogram of items that pass a specific filter of the usage samples. The problem I hit is that I can't get the data back from the datastore fast enough to do any processing before hitting the query deadline.

I have tried everything I can think of to chunk the query into parallel RPC calls to improve performance, but according to appstats I can't seem to get the queries to actually execute in parallel. No matter what method I try (see below) it always seems that the RPC's fall back to a waterfall of sequential next queries.

Note: the query and analysis code does work, it just runs to slowly because I can't get data quickly enough from the datastore.

I don't have a live version I can share, but here is the basic model for the part of the system I am talking about:

You can think of the samples as times when a user makes use of a capability of a given name. (ex: 'systemA.feature_x'). The tags are based upon customer details, system information, and the feature. ex: ['winxp', '2.5.1', 'systemA', 'feature_x', 'premium_account']). So the tags form a denormalized set of tokens that could be used to find samples of interest.

The analysis I am trying to do consists of taking a date range and asking how many times was a feature of set of features (perhaps all features) used per day (or per hour) per customer account (company, not per user).

So the input to the handler be something like:

Here is some code in common for all queries. The general structure of the handler is a simple get handler using webapp2 that sets up the query parameters, runs the query, processes the results, creates data to return.

I have tried a variety of methods to try to pull data from the datastore as quickly as possible and in parallel. The methods I have tried so far include:

This is more of a simple base case to compare against the other methods. I just build the query and iterate over all the items letting ndb do what it does to pull them one after the other.

The idea here was to see if I could do a single very large fetch.

The idea here is to recognize that the samples are fairly well spaced across time so I can create a set of independent queries that split the overall time region into chunks and try to run each of these in parallel using async:

I tried this method because the documentation made it sound like ndb may exploit some parallelism automatically when using the Query.map_async method.

I tested out one example query to collect overall response time and appstats traces. The results are:

This one goes sequentially through fetching batches one after the other and then retrieves every session from memcache. 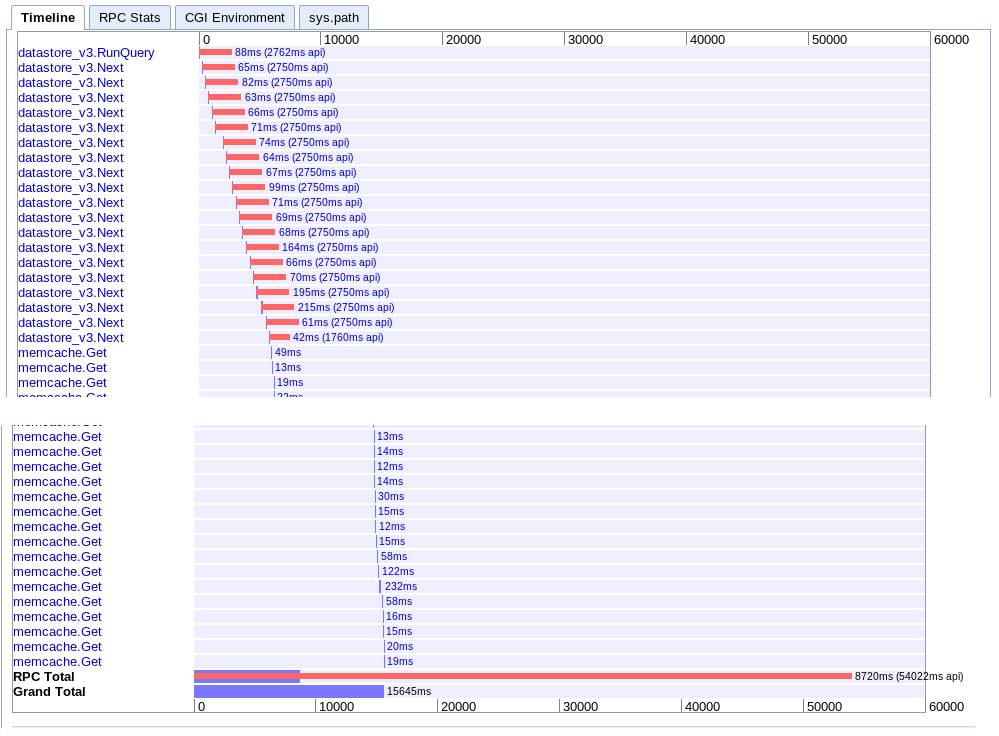 Effectively the same as option A but a bit faster for some reason. 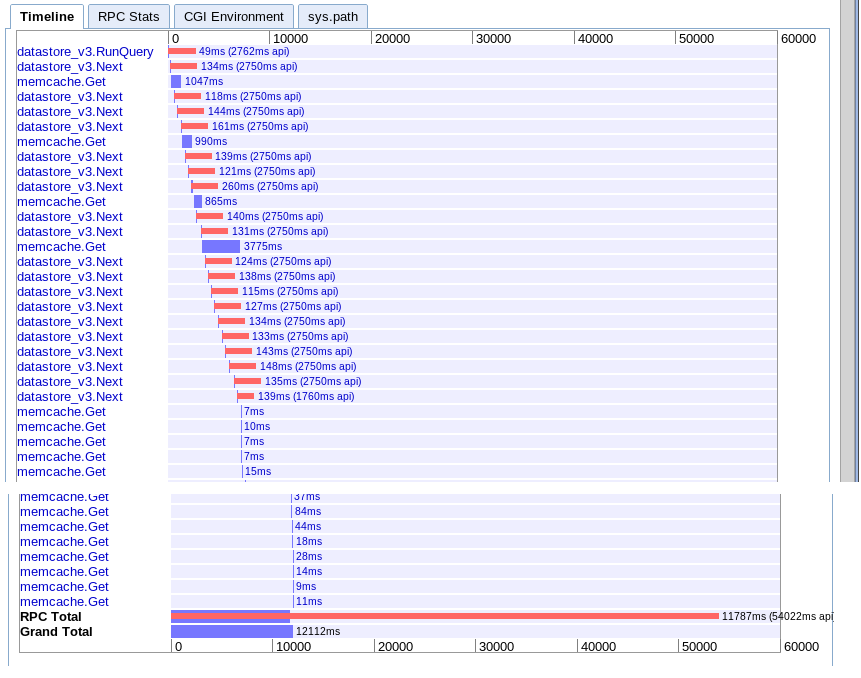 Appears to provide more parallelism at the start but seems to get slowed down by a sequence of calls to next during iteration of the results. Also doesn't seem to be able to overlap the session memcache lookups with the pending queries. 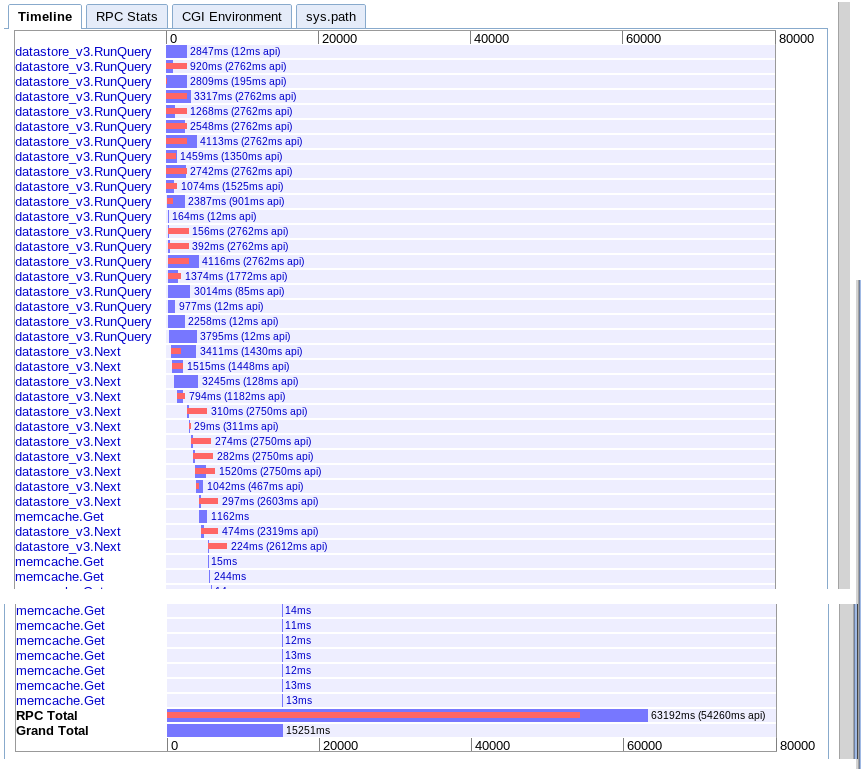 This one is the hardest for me to understand. It looks like it has q good deal of overlapping, but everything seems to stretch out in a waterfall instead of in parallel. 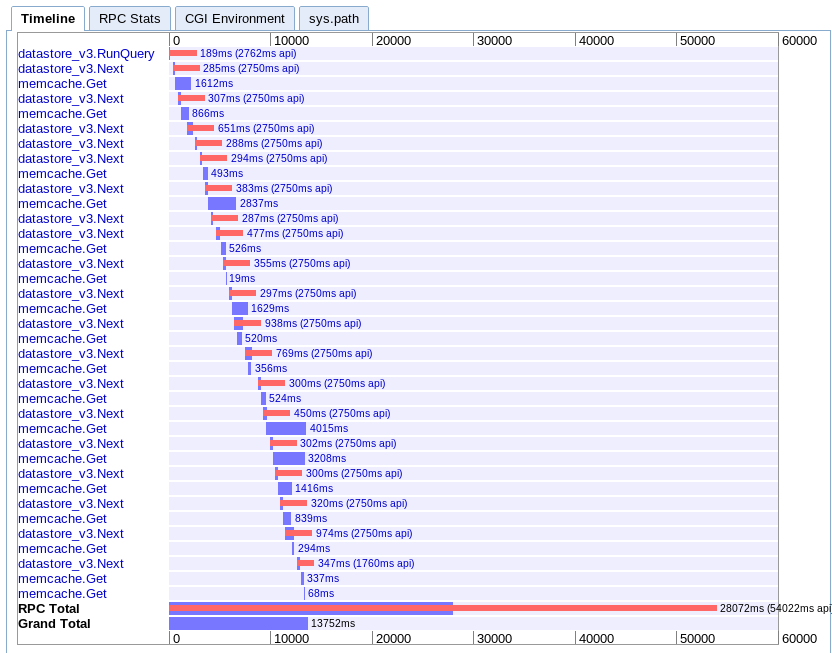 Based upon all this, what am I missing? Am I just hitting a limit on App Engine or is there a better way to pull down large number of entities in parallel?

I am at a loss as to what to try next. I thought about rewriting the client to make multiple requests to app engine in parallel but this seems pretty brute force. I would really expect that app engine should be able to handle this use case so I am guessing there is something I am missing.

In the end I found that option C was the best for my case. I was able to optimize it to complete in 6.1 seconds. Still not perfect, but much better.

After getting advice from several people, I found that the following items were key to understand and keep in mind:

So what I did to make it faster:

I am still not getting the performance I would expect or like, but it is workable for now. I just wish their was a better way to pull large numbers of sequential entities into memory quickly in handlers.

Large processing like this should not be done in a user request, which has a 60s time limit. Instead, it should be done in a context that supports long-running requests. The task queue supports requests up to 10 minutes, and (I believe) normal memory restraints (F1 instances, the default, have 128MB of memory). For even higher limits (no request timeout, 1GB+ of memory), use backends.

Here's something to try: set up a URL that, when accessed, fires off a task queue task. It returns a web page that polls every ~5s to another URL that responds with true/false if the task queue task has been completed yet. The task queue processes the data, which can take some 10s of seconds, and saves the result to the datastore either as the computed data or a rendered web page. Once the initial page detects that it has completed, the user is redirected to the page, which fetches the now computed results from the datastore.

I have a similar problem and after working with Google support for few weeks I can confirm there is no magic solution at least as of December 2017.

The limitation is CPU related and changing the instanced type directly impacts performance. This is confirmed by similar results obtained on B4 and B4_1G instances

The best throughput I got for an Expando entity with about 30 fields is:

For standard GAE SDK I tried various approaches including multi-threading but the best proved to be fetch_async with wait_any. Current NDB library already does a great job of using async and futures under the hood so any attempt to push that using threads only make it worse.

I found two interesting approaches to optimize this:

GAE SDK provides an API for reading and writing objects derived from your classes to the datastore. This saves you the boring work of validating raw data returned from the datastore and repackaging it into an easy-to-use object. In particular, GAE uses protocol buffers to transmit raw data from the store to the frontend machine that needs it. The SDK is then responsible for decoding this format and returning a clean object to your code. This utility is great, but sometimes it does a bit more work than you would like. [...] Using our profiling tool, I discovered that fully 50% of the time spent fetching these entities was during the protobuf-to-python-object decoding phase. This means that the CPU on the frontend server was a bottleneck in these datastore reads! 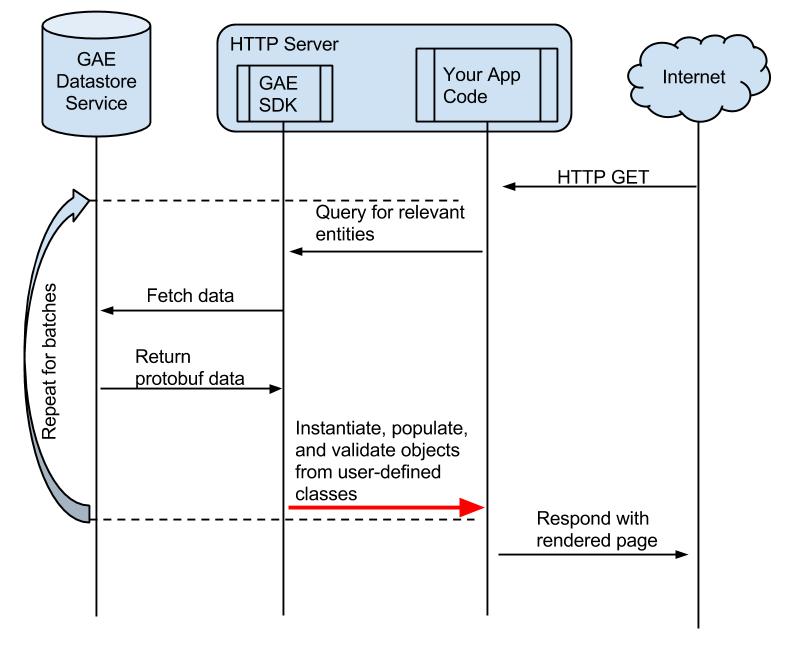 Both approaches try to reduce the time spent doing protobuf to Python decoding by reducing the number of fields decoded.

I tried both approaches but I only succeed with Matt's. SDK internals changed since Evan published his solution. I had to change a bit the code published by Matt here, but is was pretty easy - if there is interest I can publish the final code.

For a regular Expando entity with about 30 fields I used Matt's solution to decode only couple fields and obtained a significant improvement.

In conclusion one need to plan accordingly and don't expect to be able to process much more than few hundreds entities in a "real-time" GAE request.

Here's a video describing the process, but including BigQuery https://developers.google.com/events/io/sessions/gooio2012/307/

It doesn't sound like you need BigQuery, but you probably want to use both the Map and Reduce portions of the pipeline.

The main difference between what you're doing and the mapreduce situation is that you're launching one instance and iterating through the queries, where on mapreduce, you would have a separate instance running in parallel for each query. You will need a reduce operation to "sum up" all the data, and write the result somewhere though.

The other problem you have is that you should use cursors to iterate. https://developers.google.com/appengine/docs/java/datastore/queries#Query_Cursors

If the iterator is using a query offset, it'll be inefficient, since an offset issues the same query, skips past a number of results, and gives you the next set, while the cursor jumps straight to the next set.

Not the answer you're looking for? Browse other questions tagged google-app-engine app-engine-ndb google-cloud-datastore or ask your own question.

4
Improve throughput of ndb query over large data
6
AppEngine Query.fetch_async not very asynchronous?
2
How to quickly retrieve a number of rows from data store?
0
GAE: Aggregate work results from tasks? (for a GAE query performance issue)

4
Improve throughput of ndb query over large data
5
Slow deserialization when fetching low level datastore Entity objects from Memcache
1
Comparison between using two Models and using one Model with entities with two ancestors in GAE NDB Python(design for amazon.com like website)
1
how to display images from the ndb datastore using data URI scheme (via passing data to template and not having to make another request)
1
Datastore NDB best practices when querying and extracting thousands of rows
3
GAE test to verify that ndb entity was **not** put in the datastore
0
How to filter NDB entities having exactly the same repeated properties?
1
Datastore sometimes fails to fetch all required entities, but works the second time
0
NDB Queries Exceeding GAE Soft Private Memory Limit
1
Querying datastore with NDB