It is said that non-static variables cannot be used in a static method. But public static void main does. How is that?

or if you instantiate A

Yes, the main method may access non-static variables, but only indirectly through actual instances.

What people mean when they say "non-static variables cannot be used in a static method" is that non-static members of the same class can't be directly accessed (as shown in Keppils answer for instance).

When talking about non-static variables one implicitly means member variables. (Since local variables can't possible have a static modifier anyway.)

you're declaring a local variable (which typically is not referred to as non-static even though it doesn't have a static modifier).

The main method does not have access to non-static members either.

This is because by default when you call a method or variable it is really accessing the this.method() or this.variable. But in the main() method or any other static method(), no "this" objects has yet been created.

In this sense, the static method is not a part of the object instance of the class that contains it. This is the idea behind utility classes.

To call any non-static method or variable in a static context, you need to first construct the object with a constructor or a factory like your would anywhere outside of the class.

Basically it's a flaw in the design of Java IMO which allows static members (methods and fields) to be referenced as if they were instance members. This can be very confusing in code like this:

That looks like it's sending the new thread to sleep, but it actually compiles down into code like this:

because sleep is a static method which only ever makes the current thread sleep.

Indeed, the variable isn't even checked for non-nullity (any more; it used to be, I believe):

Some IDEs can be configured to issue a warning or error for code like this - you shouldn't do it, as it hurts readability. (This is one of the flaws which was corrected by C#...) 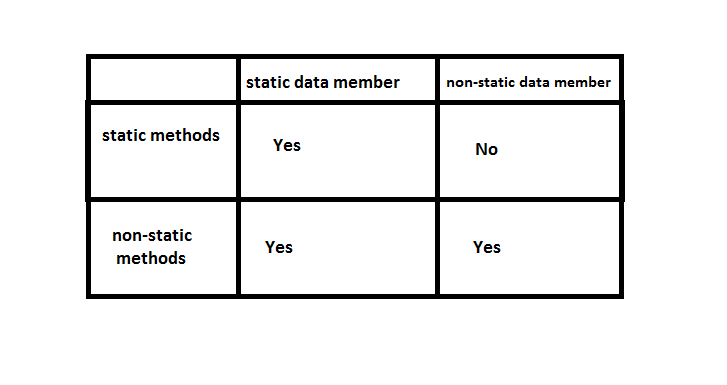 You can create non-static references in static methods like :

Not the answer you're looking for? Browse other questions tagged java variables static-methods main void or ask your own question.

7624
How do JavaScript closures work?
533
Why is the Java main method static?
953
What is the naming convention in Python for variable and function?
1570
Fastest way to determine if an integer's square root is an integer
459
What does the 'static' keyword do in a class?
547
Why can't I define a static method in a Java interface?
1993
How do I break out of nested loops in Java?
1751
Why use getters and setters/accessors?
2014
Comparing Java enum members: == or equals()?
1251
Can't execute jar- file: "no main manifest attribute"