In Mongo what is the difference between sharding and replication?

Replication seems to be a lot simpler than sharding, unless I am missing the benefits of what sharding is actually trying to achieve. Don't they both provide horizontal scaling?

In the context of scaling MongoDB:

A sharded environment does add more complexity because MongoDB now has to manage distributing data and requests between shards -- additional configuration and routing processes are added to manage those aspects.

Replication and sharding are typically combined to created a sharded cluster where each shard is supported by a replica set.

From a client application point of view you also have some control in relation to the replication/sharding interaction, in particular:

Consider you have a great music collection on your hard disk, you store the music in logical order based on year of release in different folders. You are concerned that your collection will be lost if drive fails. So you get a new disk and occasionally copy the entire collection keeping the same folder structure.

Replication >> Syncing your collection to other drives

Replication is a mostly traditional master/slave setup, data is synced to backup members and if the primary fails one of them can take its place. It is a reasonably simple tool. It's primarily meant for redundancy, although you can scale reads by adding replica set members. That's a little complicated, but works very well for some apps.

Sharding sits on top of replication, usually. "Shards" in MongoDB are just replica sets with something called a "router" in front of them. Your application will connect to the router, issue queries, and it will decide which replica set (shard) to forward things on to. It's significantly more complex than a single replica set because you have the router and config servers to deal with (these keep track of what data is stored where).

If you want to scale Mongo horizontally, you'd shard. 10gen likes to call the router/config server setup auto-sharding. It's possible to do a more ghetto form of sharding where you have the app decide which DB to write to as well.

Sharding is a technique of splitting up a large collection amongst multiple servers. When we shard, we deploy multiple mongod servers. And in the front, mongos which is a router. The application talks to this router. This router then talks to various servers, the mongods. The application and the mongos are usually co-located on the same server. We can have multiple mongos services running on the same machine. It's also recommended to keep set of multiple mongods (together called replica set), instead of one single mongod on each server. A replica set keeps the data in sync across several different instances so that if one of them goes down, we won't lose any data. Logically, each replica set can be seen as a shard. It's transparent to the application, the way MongoDB chooses to shard is we choose a shard key.

Assume, for student collection we have stdt_id as the shard key or it could be a compound key. And the mongos server, it's a range based system. So based on the stdt_id that we send as the shard key, it'll send the request to the right mongod instance.

So, what do we need to really know as a developer?

Whenever you're thinking about sharding or replication, you need to think in the context of writers/update operations. If you don't need to scale writes then replications, as it fairly simpler, is a good choice for you.

On the other hand, if you workload mostly updates/writes then at some point you'll hit a write bottleneck. If write request comes Mongo blocks other writes request. Those write request blocks until the first request will be done. If you want to scale this writes and want parallelize it then you need to implement sharding.

Just to put this somewhere...

The most basic way to run mongo is as standalone server.

For this picture, I didn't include the "client". Check the next one. 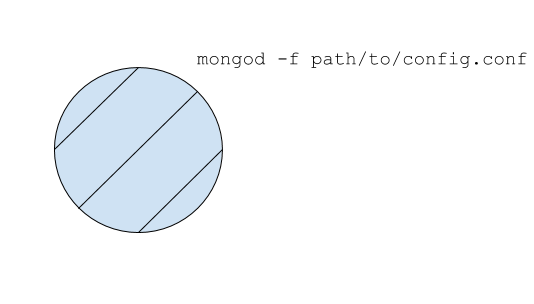 The initialization of the replica set is represented in the red border box. 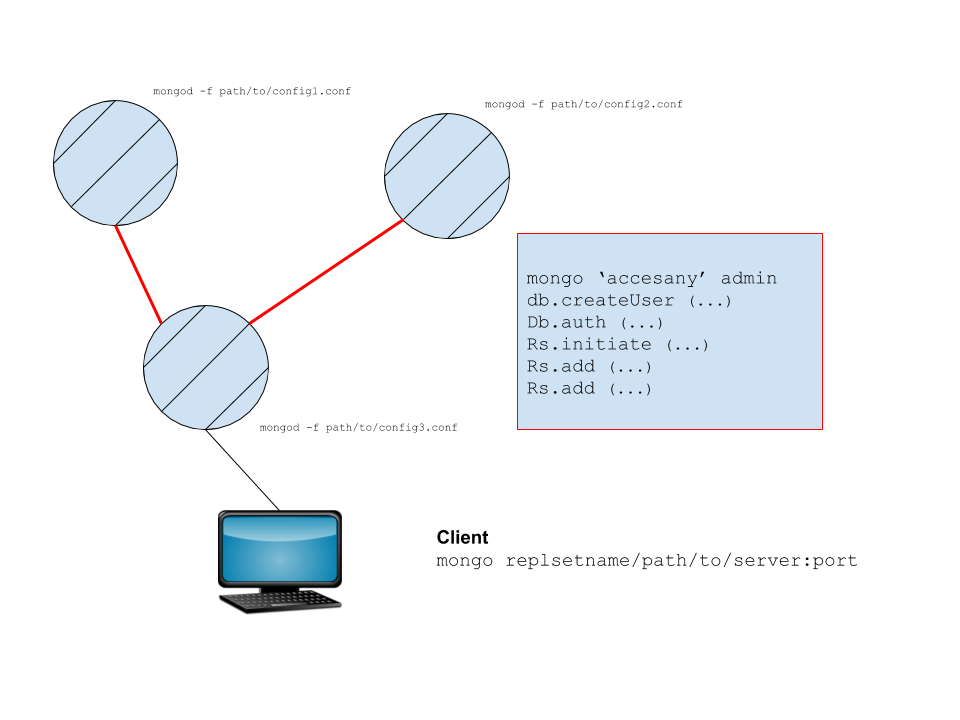 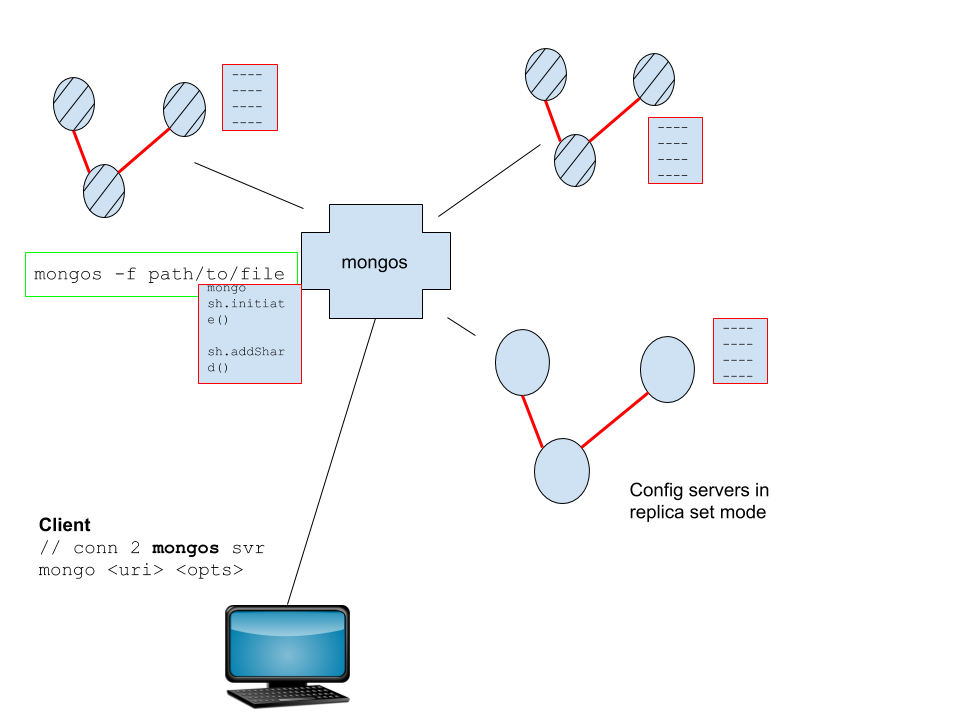 There is much more to add, but apart from the words the pictures hold much the same.

Even mongoDB recommends to study your case carefully before going sharding. Vertical scaling (vs) is probably a good idea at least once before horizontal scaling (hs).

vs is done upgrading hardware (cpu, ram, etc). hs is needs more computers (but could be cheap computers).

Both replication and sharding can be used (individually or together) for horizontal scaling of a MongoDB installation.

Sharding is MongoDB's solution for meeting the demands of data growth. Sharding stores data records across multiple servers to provide faster throughput on read and write queries, particularly for very large data sets. Any of the servers in the sharded cluster can respond to a read or write operation, which greatly speeds up query responses.

Replication is MongoDB's solution for providing stability, backup, and disaster recovery to a MongoDB installation. This process copies and synchronizes the replica data set across multiple servers. This prevents downtime if one server goes offline.

Scenario 1: Fault-Tolerance In this scenario, the user is storing billing data in a MongoDB installation. This data is mission-critical to the user's business, and needs to be available 24/7, even if a server crashes or is taken offline.

MongoDB replication is the best solution for this user. With replication, the entire data set is mirrored on multiple servers. If a server fails or is taken offline, the other servers in the cluster take over.

Scenario 2: High Performance In this scenario, the user is running a social networking site which is run from a MongoDB database. As the social network grows, the MongoDB data set has grown along with it. The user is seeing query times and page loads increase beyond an acceptable point. It is critical that the user's MongoDB installation receives a major performance boost.

Setting up a sharded MongoDB cluster is the best solution for this user. The sharded cluster will break up the user's data set and store parts of it on separate secondary servers. Each secondary server can respond to read or write queries on its portion of the data, which greatly increases the installation's response time

MongoDB Atlas is a Database as a service in could. It support three major cloud providers such as Azure , AWS and GCP. In cloud environment , we usually talk about high availability and scalability. In Atlas “clusters”, can be either a replica set or a sharded cluster. These two address high availability and scalability features of our cloud environment.

In general Cluster is a group of servers used to achieve a specific task. So sharded clusters are used to store data in across multiple machines to meet the demand of data growth. As the size of the data increases, a single machine may not be sufficient to store the data nor provide an acceptable read and write throughput. Sharded clusters supports the horizontal scalability of the underling cloud environment.

A replica set in MongoDB is a group of mongod processes that maintain the same data set. Replica sets provide redundancy and high availability, and are the basis for all production deployments.In a replica, one node is a primary node that receives all write operations. All other instances, such as secondaries, apply operations from the primary so that they have the same data set. Replica set mainly focus on the availability of data.

0
can i use MongoReplicaSetClient even for one server?
0
Mongodb queires are slow as write and read goes to primary
0
"Grouping" Data in a MongoDB cluster