How can I convert them?

All right, so if I understand correctly, when I measure the linear acceleration, the position of the phone completely does not matter, because the readings are given in Earth's coordinate system. right?

But I just did a test where I put the phone in different positions and got acceleration in different axes. There are 3 pairs of pictures - the first ones show how I put the device (sorry for my Paint "master skill") and the second ones show readings from data provided by the linear acc. sensor: 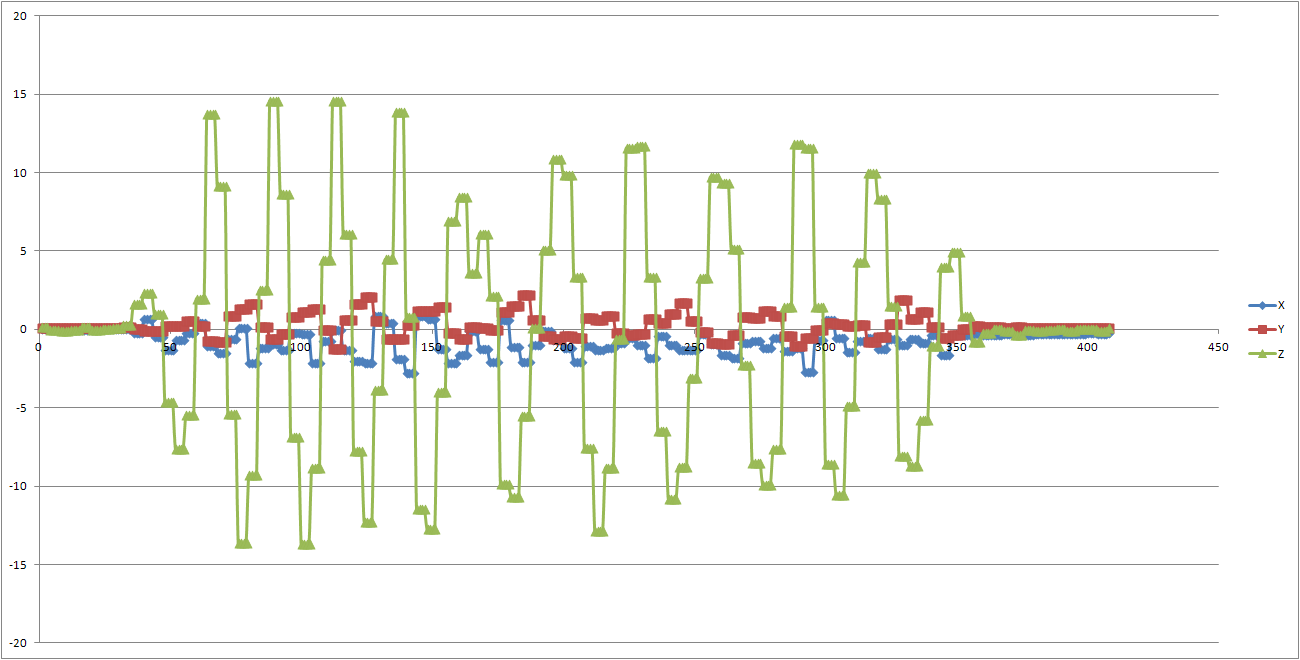 And now - why in the third case the acceleration occurs along the Z axis (not Y) since the device position doesn't matter?

I finally managed to solve it! So to get acceleration vector in Earth's coordinate system you need to:

And there you have it! I hope I will save some precious time for others.

Thanks for Edward Falk and Ali for hints!!

Based on @alex's answer, here is the code snippet:

According to the documentation you get the linear acceleration in the phone's coordinate system.

(Perhaps there already is a function doing this multiplication for you but I don't do Android programming and I am not familiar with its API.)

OK, first of all, if you're trying to do actual inertial navigation on Android, you've got your work cut out for you. The cheap little sensor used in smart phones are just not precise enough. Although, there has been some interesting work done on intertial navigation over small distances, such as inside a building. There are probably papers on the subject you can dig up. Google "Motion Interface Developers Conference" and you might find something useful -- that's a conference that Invensense put on a couple months ago.

Second, no, linear acceleration is in device coordinates, not world coordinates. You'll have to convert yourself, which means knowing the device's 3-d orientation.

What you want to do is use a version of Android that supports the virtual sensors TYPE_GRAVITY and TYPE_LINEAR_ACCELERATION. You'll need a device with gyros to get reasonably accurate and precise readings.

Internally, the system combines gyros, accelerometers, and magnetometers in order to come up with true values for the device orientation. This effectively splits the accelerometer device into its gravity and acceleration components.

So what you want to do is to set up sensor listeners for TYPE_GRAVITY, TYPE_LINEAR_ACCELERATION, and TYPE_MAGNETOMETER. Use the gravity and magnetometer data as inputs to SensorManager. getRotationMatrix() in order to get the rotation matrix that will transform world coordinates into device coordinates or vice versa. In this case, you'll want the "versa" part. That is, convert the linear acceleration input to world coordinates by multiplying them by the transpose of the orientation matrix.

Not the answer you're looking for? Browse other questions tagged android vector accelerometer coordinate-systems coordinate-transformation or ask your own question.