Using SQL Server 2008 R2 I am trying to establish a relationship between two companies. For the sake of illustration; one table is called 'company', another is called 'branch'. Company and branch both have primary keys. Company should relate to Branch in a one to many relationship. A row called 'branches' should be the foreign key in the table Company; linked to the primary key of the Branch table.

Naturally I go for the 'relationships' option in the Table designer menu in SSMS. But this is as far as I get. 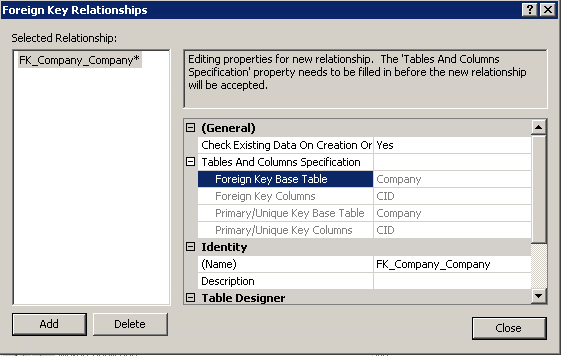 This is very confusing o.O Anybody know how to... edit it?

Click on the ... at the right of the "Tables and Columns Specification"

Not the answer you're looking for? Browse other questions tagged sql sql-server ssms foreign-key-relationship or ask your own question.