Visual Studio: How to break on handled exceptions?

I would like Visual Studio to break when a handled exception happens (i.e. I don't just want to see a "First chance" message, I want to debug the actual exception).

e.g. I want the debugger to break at the exception:

I came across these notes for Visual Studio.NET:

2) In the bottom of that dialog there is a "When the exception is thrown:" group box, select "Break into the debugger"

3) Run your scenario. When the exception is thrown, the debugger will stop and notify you with a dialog that says something like: "An exception of type "System.NullReferenceException" has been thrown. [Break] [Continue]"

Hit [Break]. This will put you on the line of code that's causing the problem.

But they do not apply to Visual Studio 2005 (there is no Exceptions option on the Debug menu).

Does anyone know where the find this options dialog in Visual Studio that the "When the exception is thrown" group box, with the option to "Break into the debugger"?

Update: The problem was that my Debug menu didn't have an Exceptions item. I customized the menu to manually add it.

With a solution open, go to the Debug - Exceptions (Ctrl+D,E) menu option. From there you can choose to break on Thrown or User-unhandled exceptions.

EDIT: My instance is set up with the C# "profile" perhaps it isn't there for other profiles?

There is an 'exceptions' window in VS2005 ... try Ctrl+Alt+E when debugging and click on the 'Thrown' checkbox for the exception you want to stop on.

Took me a while to find the new place for expection settings, therefore a new answer.

The simplest way to handle custom exceptions is selecting "all exceptions not in this list".

Here is a screenshot from the english version: 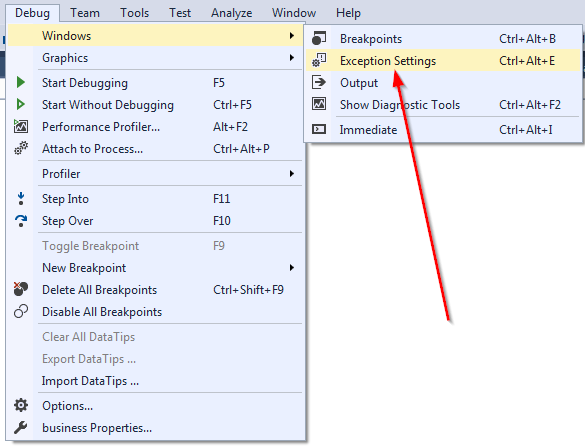 Here is a screenshot from the german version: 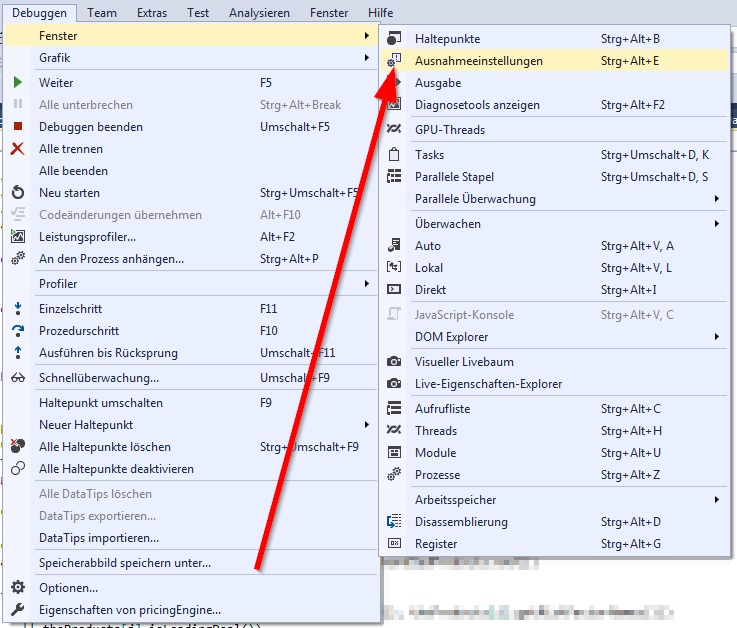 From Visual Studio 2015 and onward, you need to go to the "Exception Settings" dialog (Ctrl+Alt+E) and check off the "Common Language Runtime Exceptions" (or a specific one you want i.e. ArgumentNullException) to make it break on handled exceptions.

Check Managing Exceptions with the Debugger page, it explains how to set this up.

Essentially, here are the steps (during debugging):

A technique I use is something like the following. Define a global variable that you can use for one or multiple try catch blocks depending on what you're trying to debug and use the following structure:

I find this gives me a bit more flexibility in terms of testing because there are still some exceptions I don't want the IDE to break on.

The online documentation seems a little unclear, so I just performed a little test. Choosing to break on Thrown from the Exceptions dialog box causes the program execution to break on any exception, handled or unhandled. If you want to break on handled exceptions only, it seems your only recourse is to go through your code and put breakpoints on all your handled exceptions. This seems a little excessive, so it might be better to add a debug statement whenever you handle an exception. Then when you see that output, you can set a breakpoint at that line in the code.

Not the answer you're looking for? Browse other questions tagged visual-studio exception debugging or ask your own question.

0
C# stop on error line within try catch
1
How to see details (e.g. inner exception) of unhanded exception
1
C# crashes despite try/catch block
0
Force exception to be treated by debugger as unhandled exception
20
How to tell the debugger to ignore breaking on thrown exceptions?
8
Exceptions debugging with async and UWP
2
Parallel.ForEach is not executing the method
5
Visual Studio strange startup exception
2
Change Slider's value in XAML throw an exception
1
Continue loop after exception in F#
See more linked questions

2380
Catch multiple exceptions at once?
5002
How can I safely create a nested directory in Python?
1534
Proper way to declare custom exceptions in modern Python?
1209
.gitignore for Visual Studio Projects and Solutions
248
Break when exception is thrown
1232
Difference between Build Solution, Rebuild Solution, and Clean Solution in Visual Studio?
3346
Catch multiple exceptions in one line (except block)
1056
Can you force Visual Studio to always run as an Administrator in Windows 8?
147
Android Studio IDE: Break on Exception