I am all confused after reading the article on javaranch site by Corey McGlone, The author of The SCJP Tip Line. named Strings, Literally and the SCJP Java 6 Programmer Guide by Kathy Sierra (co-founder of javaranch) and Bert Bates.

I will try to quote what Mr. Corey and Ms Kathy Sierra have quoted about String Literal Pool.

1. According to Mr Corey McGlone :

Now the explanation of "new" operator for the creation of a String and its reference is bit confusing in this article, so I am putting the code and explanation from the article itself as it-is below.

In this case, we actually end up with a slightly different behavior because of the keyword "new." In such a case, references to the two String literals are still put into the constant table (the String Literal Pool), but, when you come to the keyword "new," the JVM is obliged to create a new String object at run-time, rather than using the one from the constant table.

Here is the diagram explaining it.. 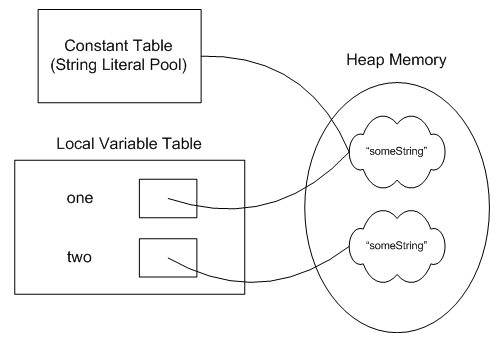 So does it mean, that String Literal Pool too has a reference to this Object ?

Here is the link to the Article by Corey McGlone

2. According to Kathy Sierra and Bert Bates in SCJP book:

Please clear this doubt, though it won't matter too much while writing a code, but is very important from the aspect of memory management, and thats the reason I want to clear this funda.

I think the main point to understand here is the distinction between String Java object and its contents - char[] under private value field. String is basically a wrapper around char[] array, encapsulating it and making it impossible to modify so the String can remain immutable. Also the String class remembers which parts of this array is actually used (see below). This all means that you can have two different String objects (quite lightweight) pointing to the same char[].

I will show you few examples, together with hashCode() of each String and hashCode() of internal char[] value field (I will call it text to distinguish it from string). Finally I'll show javap -c -verbose output, together with constant pool for my test class. Please do not confuse class constant pool with string literal pool. They are not quite the same. See also Understanding javap's output for the Constant Pool.

For the purpose of testing I created such a utility method that breaks String encapsulation:

It will print hashCode() of char[] value, effectively helping us understand whether this particular String points to the same char[] text or not.

Two string literals in a class

Let's start from the simplest example.

BTW if you simply write "ab" + "c", Java compiler will perform concatenation at compile time and the generated code will be exactly the same. This only works if all strings are known at compile time.

Each class has its own constant pool - a list of constant values that can be reused if they occur several times in the source code. It includes common strings, numbers, method names, etc.

Here are the contents of the constant pool in our example above.

The important thing to note is the distinction between String constant object (#2) and Unicode encoded text "abc" (#38) that the string points to.

Here is generated byte code. Note that both one and two references are assigned with the same #2 constant pointing to "abc" string:

For each example I am printing the following values:

No surprise that both pairs are equal:

Which means that not only both objects point to the same char[] (the same text underneath) so equals() test will pass. But even more, one and two are the exact same references! So one == two is true as well. Obviously if one and two point to the same object then one.value and two.value must be equal.

Now the example we all waited for - one string literal and one new String using the same literal. How will this work?

The fact that "abc" constant is used two times in the source code should give you some hint...

Look carefully! The first object is created the same way as above, no surprise. It just takes a constant reference to already created String (#2) from the constant pool. However the second object is created via normal constructor call. But! The first String is passed as an argument. This can be decompiled to:

It becomes clear when you look at how String(String) constructor works (greatly simplified here):

See? When you are creating new String object based on existing one, it reuses char[] value. Strings are immutable, there is no need to copy data structure that is known to be never modified.

I think this is the clue of your problem: even if you have two String objects, they might still point to the same contents. And as you can see the String object itself is quite small.

Let's say you initially used two different strings but after some modifications they are all the same:

The Java compiler (at least mine) is not clever enough to perform such operation at compile time, have a look:

The fist string is constructed as usual. The second is created by first loading the constant "?abc" string and then calling substring(1) on it.

before printing hash codes. Not only both one and two point to the same text, but they are the same reference!

This means both one.equals(two) and one == two tests will pass. Also we saved some memory because "abc" text appears only once in memory (the second copy will be garbage collected).

The second exercise is slightly different, check out this:

Obviously one and two are two different objects, pointing to two different texts. But how come the output suggests that they both point to the same char[] array?!?

I'll leave the answer to you. It'll teach you how substring() works, what are the advantages of such approach and when it can lead to big troubles.

Not the answer you're looking for? Browse other questions tagged java string memory-management or ask your own question.

-4
What is a Java String's default initial construction method?
110
Where does Java's String constant pool live, the heap or the stack?
28
String s = new String(“xyz”). How many objects has been made after this line of code execute?
50
Memory leak traps in the Java Standard API
25
Understanding javap's output for the Constant Pool
12
String empty constructor in java
8
Size of empty Java String
12
Why String intern method?
12
Java String creation and String constant pool
2
why kotlin use === compare primitive type equal each other if they has same value
See more linked questions

6832
What is the difference between String and string in C#?
6942
Is Java “pass-by-reference” or “pass-by-value”?
4267
How do I read / convert an InputStream into a String in Java?
3065
Case insensitive 'Contains(string)'
4065
How do I make the first letter of a string uppercase in JavaScript?
4729
How to replace all occurrences of a string in Javascript?
7421
How to check whether a string contains a substring in JavaScript?
3596
Does Python have a string 'contains' substring method?
3168
How do I convert a String to an int in Java?
3547
Why is char[] preferred over String for passwords?