I'm unsure of the best way to perform this type of migration but my strategy is to use "Manage NuGet Packages" identify which projects reference the package, uncheck the package from each project, install the replacement and recheck the correct projects.

Unfortunately, after doing this, my solution produced the titular "FileLoadException".

I searched through the solution files particularly packages.config for references to EF 5.0.0.0 RC but could find none.

After failed attempts to find references to EntityFramework in repositories.config and elsewhere, I stumbled upon a reference in Web.config as I was editing it to help with my diagnosis.

The bindingRedirect referenced 5.0.0.0 which was no longer installed and this appeared to be the source of the exception. Honestly, I did not add this reference to Web.config and, after trying to duplicate the error in a separate project, discovered that it is not added by the NuGet package installer so, I don't know why it was there but something added it.

I decided to replace this with the equivalent element from a working project. NB the references to 5.0.0.0 are replaced with 4.3.1.0 in the following:

I then decided to remove the dependentAssembly reference for the EntityFramework in its entirety.

So, I'm posting this here as a self-answered question in the hope that it helps someone else. If anyone can explain to me:

I have this issue, and all I did was make sure that I was referencing the right .Net framework in all the projects then just change the web.config from

I had the same issue when updating an older project. Here's what I did to resolve it:

My problem came from older projects being on .NET 4 and a newer project running .NET 4.5 so there were 2 dll versions of EF in my solution.

Hope this helps someone...

I had a similar issue running unit tests using MSTEST under Jenkins. The fix in my case was to remove "Version=6.0.0.0, " as shown below:

I had to make this change is several App.config and Web.config files in my multi-project solution.

While Building a Project, if in the project properties it shows that it is build under Target.NET Framework 4.5, update it to 4.6 or 4.6.1. Then the build will be able to locate Entity Framework 6.0 in the Web.config file. This approach solved my problem. Selecting Target framework from Project Properties

If you used the Visual Studio 2012 ASP.NET Web Forms Application template then you would have gotten that reference. I'm assuming it's the one you would get via Nuget instead of the framework System.Data.Entity reference. 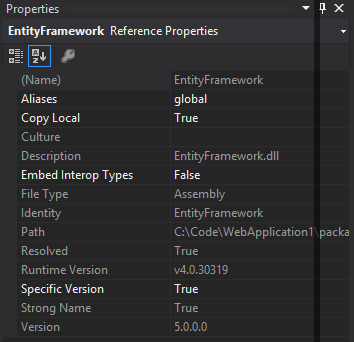 I received the exact same error message. Except that my error message said "Could not load file or assembly 'EntityFramework, Version=6.0.0.0...", because I installed EF 6.1.1. Here's what I did to resolve the problem.

3) Once I received confirmation that the package has been uninstalled successfully, I installed the 5.0.0 version by typing the following command:

The problem is resolved.

I had similar issue with selenium: I downgraded my selenium using NuGet and got the same error message. My solution was to remove the newer version lines from the app.config file.

I got same issue. I was getting the System.Data.Entity.Infrastructure; error which is only part of v5.0 or later. Just right click the Reference and select "Manage NuGet Package" . In the Installed Package option , uninstall the Entity FrameWork which is already installed and Install the 5.0 version. It solve the problem. I was trying manually get the System.Data.Entity reference , which was not success.

Finally I do Update-Database -Verbose again and voila! The schema and tables are created. Wait for the next version of connector to use it with Entity Framework 5.

I had a similar issue:

On execution, when reading from the database the app always thrown the exception Could not load file or assembly 'EntityFramework, Version=5.0.0.0 ....

The issue was fixed by removing the EntityFramework.dll v4.0 from my MVC project. I've also updated the web.config file with the correct 5.0 version. Then everything worked as expected.

In your references click on the EntitiyFramework . Go to properties and set the specific version to False. It worked for me.

Not the answer you're looking for?Browse other questions tagged entity-framework or ask your own question.