I've been learning Functions and Stored Procedure for quite a while but I don't know why and when I should use a function or a stored procedure. They look same to me, maybe because I am kinda newbie about that.

Can some one tell me why?

A point worth noting from comments, which summarize the answer. Thanks to @Sean K Anderson:

The difference between SP and UDF is listed below:

Functions and stored procedures serve separate purposes. Although it's not the best analogy, functions can be viewed literally as any other function you'd use in any programming language, but stored procs are more like individual programs or a batch script.

Functions normally have an output and optionally inputs. The output can then be used as the input to another function (a SQL Server built-in such as DATEDIFF, LEN, etc) or as a predicate to a SQL Query - e.g., SELECT a, b, dbo.MyFunction(c) FROM table or SELECT a, b, c FROM table WHERE a = dbo.MyFunc(c).

Stored procs are used to bind SQL queries together in a transaction, and interface with the outside world. Frameworks such as ADO.NET, etc. can't call a function directly, but they can call a stored proc directly.

Functions do have a hidden danger though: they can be misused and cause rather nasty performance issues: consider this query:

Where MyFunction is declared as:

So you do need to be careful writing functions. If you do SELECT from a table in a function, you need to ask yourself whether it can be better performed with a JOIN in the parent stored proc or some other SQL construct (such as CASE ... WHEN ... ELSE ... END).

Write a user-defined function when you want to compute and return a value for use in other SQL statements; write a stored procedure when you want instead is to group a possibly-complex set of SQL statements. These are two pretty different use cases, after all!

Function must return a value but in Stored Procedure it is optional( Procedure can return zero or n values).

Stored Procedures cannot be used in the SQL statements anywhere in the WHERE/HAVING/SELECT section whereas Function can be.

Functions that return tables can be treated as another rowset. This can be used in JOINs with other tables.

Inline Function can be though of as views that take parameters and can be used in JOINs and other Rowset operations.

We can go for Transaction Management in Procedure whereas we can't go in Function.

a User Defined Function is an important tool available to a sql server programmer. You can use it inline in a SQL statement like so

where lookupValue will be an UDF. This kind of functionality is not possible when using a stored procedure. At the same time you cannot do certain things inside a UDF. The basic thing to remember here is that UDF's:

a stored procedure can do those things.

Stored Procedures are used as scripts. They run a series of commands for you and you can schedule them to run at certain times. Usually runs multiples DML statements like INSERT, UPDATE, DELETE, etc. or even SELECT.

Functions are used as methods. You pass it something and it returns a result. Should be small and fast - does it on the fly. Usually used in a SELECT statement.

SQL Server functions, like cursors, are meant to be used as your last weapon! They do have performance issues and therefore using a table-valued function should be avoided as much as possible. Talking about performance is talking about a table with more than 1,000,000 records hosted on a server on a middle-class hardware; otherwise you don't need to worry about the performance hit caused by the functions.

Start with functions that return a single value. The nice thing is you can put frequently used code into a function and return them as a column in a result set.

Then, you might use a function for a parameterized list of cities. dbo.GetCitiesIn("NY") That returns a table that can be used as a join.

It's a way of organizing code. Knowing when something is reusable and when it is a waste of time is something only gained through trial and error and experience.

Also, functions are a good idea in SQL Server. They are faster and can be quite powerful. Inline and direct selects. Careful not to overuse.

I realize this is a very old question, but I don't see one crucial aspect mentioned in any of the answers: inlining into query plan.

The third kind (inline table-valued) are treated by the query optimizer essentially as (parametrized) views, which means that referencing the function from your query is similar to copy-pasting the function's SQL body (without actually copy-pasting), leading to the following benefits:

The above can lead to potentially significant performance savings, especially when combining multiple levels of functions.

NOTE: Looks like SQL Server 2019 will introduce some form of scalar function inlining as well. 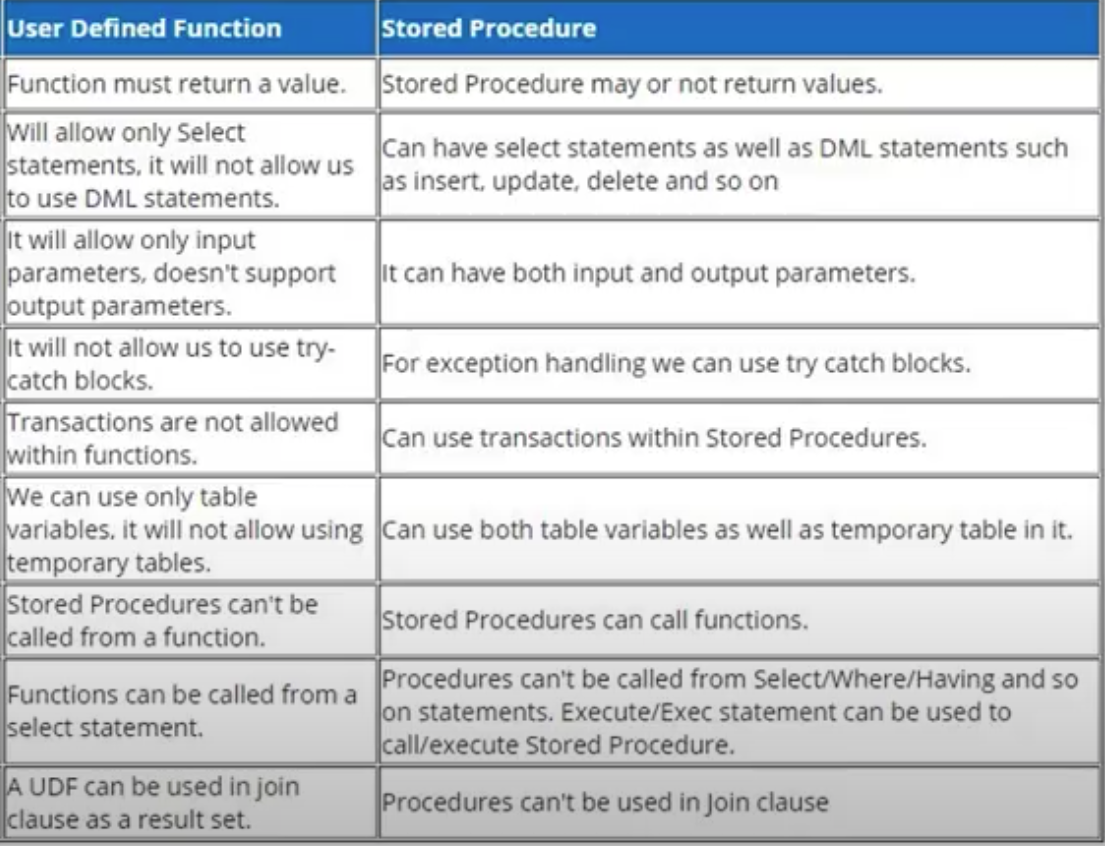 Here getsal is a user defined function which returns a salary type, when table is created no storage is allotted for salary type, and getsal function is also not executed, But when we are fetching some values from this table, getsal function get’s executed and the return Type is returned as the result set.

Generally using stored procedures is better for perfomances. For example in previous versions of SQL Server if you put the function in JOIN condition the cardinality estimate is 1 (before SQL 2012) and 100 (after SQL 2012 and before of SQL 2017) and the engine can generate a bad execution plan.

Also if you put it in WHERE clause the SQL Engine can generate a bad execution plan.

With SQL 2017 Microsoft introduced the feature called interleaved execution in order to produce a more accurate estimate but the stored procedure remains the best solution.

In SQL Server, functions and stored procedure are two different types of entities.

Function: In SQL Server database, the functions are used to perform some actions and the action returns a result immediately. Functions are two types:

Not the answer you're looking for? Browse other questions tagged sql sql-server tsql stored-procedures sql-function or ask your own question.