Fix: The Global element 'configuration' has already been declared

I.e. created a XSD with the button to create a scheme. I changed the stylesheet in app.config to app.xsd but now I get the warning:

The Global element 'configuration' has already been declared in app.xsd

Even when changing the name the warning is shown. Does anybody have a solution for this?

First, I just upgraded to Windows 8. This problem didn't occur before then. And this issue only happened in one of my app.config files. So I decided to compare the problematic app.config with a good one. In Visual Studio, with the app.config open, I went to Xml -> Schemas. I noticed that the good config only had three of these schemas checked. The bad one had the same three checked, plus a DotNetConfig.xsd. After I changed the Use column to automatic, for DotNetConfig.xsd, the problem went away. 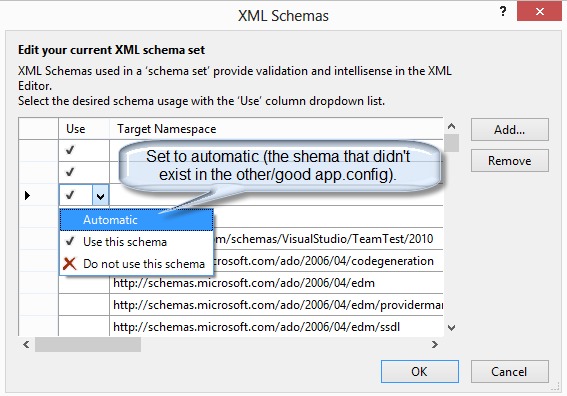 I had a similar problem to the question you are referring to, I followed these instructions and everything was fine. Make sure the EnterpriseLibrary.Configuration.xsd is in %ProgramFiles%\Microsoft Visual Studio [version]\Xml\Schemas\ first of all, then do this:

Link to the article is here , hopes this helps

My issue was I went from .Net 4.5 to .Net 4.0. To resolve the issue I switched all the ticked schemas to automatic.

I struggled with this for a while as well. Turns out, my version of the problem originated from the hidden {PROJECTNAME}.SUO file created by Visual Studio.

My guess is, VS will cache the XSD schema associations in this file. The warnings popped up after I changed the target framework, and they disappeared after I deleted the SUO file and restarted VS.

With the symptoms as described in the question, and using Visual Studio 2013 (Update 4), I could see in the XML Schemas [sic] dialog that both DotNetConfig.xsd and DotNetConfig40.xsd were selected for use.

The two XSD files conflict with each other, each defining the same elements, causing the warnings to be emitted.

These schema files are contained in the %programfiles(x86)%\Microsoft Visual Studio 12.0\xml\Schemas\ folder.

DotNetConfig.xsd is in the 1033 sub-folder and appears to be the newer, more complete version.

No matter what settings I selected in XML Schemas, I could not deselect, or remove DotNetConfig40 nor DotNetConfig. I tried "Remove", and changing the Use parameter from "Use this schema" to "Automatic" and then "Do not use this schema".

No matter what was selected, for either file, when I would return to the dialog, both would be selected for use. I also tried the trick of moving to another row before pressing "OK" to no avail.

Finally, I renamed the DotNetConfig40.xsd file to DotNetConfig40 DO NOT USE.xsd to prevent it from being loaded. This immediately solved the problem.

I'm not pleased with having to do that, and worry if it'll have an undesired side effect with other projects. I'll update this post with my results.

This issue got fixed once I closed the file in the editor that was causing these warnings and recompiled.

Changing DotNetConfig.xsd to use "Automatic" solved the problem.

After rebooting the system the problem is solved, meaning I do not get any warnings anymore related to the scheme.

So it seems that rebooting (and possibly some implicit restore/reset removed the warning).

For me i noticed i had a bunch of XML Schemas that were duplicated, i just simply marked as Don't Use all the ones that weren't related to Visual Studio 2017. The problem immediately disappeared

Using Visual Studio 2015 Community Edition - generating a web.xsd in the root folder of my project and adding it to the schema list cleared all but one of the warnings,

The global element 'configuration' has already been declared'.

Closing the web.config file in the text editor and rebuilding the project cleared this warning.

I tried to do what others suggested:

All this did not work.

However, the solution of OLEG as described here worked.

All I had to do is replace the following part in of all used DotNetConfigXX.xsd files (XX is empty, or a number) with the following code

After a restart of visual studio the errors were gone.