When I first learned Java, I was using an IDE called "BlueJ." It had this feature called "Scope Highlighting" which made it very easy to read blocks of code. Now I've moved on from BlueJ and began using Eclipse. I'm currently in the process of customizing Eclipse to my liking and would like this Scope Highlighting feature inside Eclipse.

I've searched everywhere for an answer on how to do it but I cannot find any information pointing to a solution for doing it in Eclipse.

Here's a picture to demonstrate what Scope Highlighting looks like: 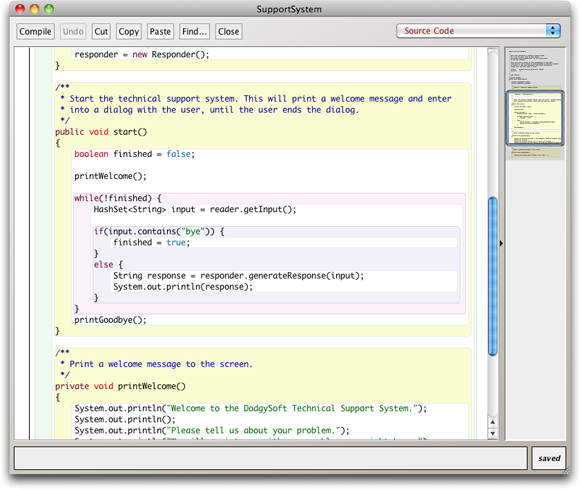 I think the best option for you is EditBox, a scope highlighting plugin for Eclipse: http://editbox.sourceforge.net/

I'm afriad that closest you can get is Shift + Alt + arrow_up

It is selecting wider block of code. pressing this few times will give you very similar result to what you are searching for. I use it often.. it is useful, also for refactoring.


EDIT: As @j2emanue said: you can just double click the delimiter (like a bracket) and it will highlight the entire scope.

as a side note: if your using intelliji checkout this plugin works great: https://github.com/izhangzhihao/intellij-rainbow-brackets#screenshots

This isn't exactly what you're after but you can put your cursor in a method and then click the Show Source Of Selected Element only button on the toolbar. Your editor gets reduced to just that method. Click again and your back to your entire file. 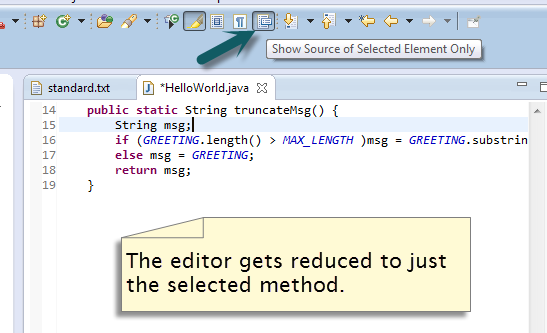 I doubt eclipse does have the same function as blue j.The best advise I can give you, is to change your theme to your liking which would enable you to easily select and highlight the block of code...and to customise your theme , go to http://eclipsecolorthemes.org/. ....

If you still have a problem, go to http://codejava.co.uk/contact.html and send your email.you can create a dummy one if want, then I will send you XML files I use for my eclipse themes.

can Bracketeer do this ? its an eclipse plug in ..

Not the answer you're looking for? Browse other questions tagged java ide scope highlighting bluej or ask your own question.

2120
What is the scope of variables in JavaScript?
632
Eclipse/Java code completion not working
1284
'Must Override a Superclass Method' Errors after importing a project into Eclipse
557
Is there a way to collapse all code blocks in Eclipse?
563
Eclipse: Set maximum line length for auto formatting?
609
Clearing coverage highlighting in Eclipse
8
"Scope Highlight" feature in Visual Studio? (same as seen in BlueJ for java)