I have recently started working with Git.

Going over the Git book online I found the following under the "Git Rebase" section:

With the rebase command, you can take all the changes that were committed on one branch and replay them on another one.

I thought this is the exact definition of git cherry-pick (reapply a commit or a set of commit objects on the currently checked out branch).

What is the difference between the two ?

Since the time git cherry-pick learned to be able to apply multiple commits, the distinction indeed became somewhat moot, but this is something to be called convergent evolution ;-)

The true distinction lies in original intent to create both tools:

Hence, possibly the most striking difference between these two commands is how they treat the branch they work on: git cherry-pick usually brings a commit from somewhere else and applies it on top of your current branch, recording a new commit, while git rebase takes your current branch and rewrites a series of its own tip commits in one way or another. Yes, this is a heavily dumbed down description of what git rebase can do, but it's intentional, to try to make the general idea sink in.

Update to further explain an example of using git rebase being discussed. 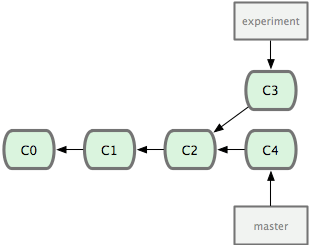 However, there is another way: you can take the patch of the change that was introduced in C3 and reapply it on top of C4. In Git, this is called rebasing. With the rebase command, you can take all the changes that were committed on one branch and apply them onto another one.

In this example, you’d run the following:

"The catch" here is that in this example, the "experiment" branch (the subject for rebasing) was originally forked off the "master" branch, and hence it shares commits C0 through C2 with it — effectively, "experiment" is "master" up to, and including, C2 plus commit C3 on top of it. (This is the simplest possible case; of course, "experiment" could contain several dozens of commits on top of its original base.)

Now git rebase is told to rebase "experiment" onto the current tip of "master", and git rebase goes like this:

Now back to your question. As you can see, here technically git rebase indeed transplants a series of commits from "experiment" to the tip of "master", so you can rightfully tell there indeed is "another branch" in the process. But the gist is that the tip commit from "experiment" ended up being the new tip commit in "experiment", it just changed its base:

Again, technically you can tell that git rebase here incorporated certain commits from "master", and this is absolutely correct.

With cherry-pick, the original commits/branch sticks around and new commits are created. With rebase, the whole branch is moved with the branch pointing to the replayed commits.

Let say you started with:

for more info about git this book has most of it (http://git-scm.com/book)

When you do rebasing it applies all commits in the history to the HEAD of the branch that are missing there.

Answers given above are good, I just wanted to give an example in an attempt to demonstrate their interrelation.

It is not recommended to replace "git rebase" with this sequence of actions, it's just "a proof of concept" which, I hope, helps to understand how things work.

Given the following toy repository:

Say, we have some very important changes (commits #2 through #5) in master which we want to include into our test_branch_1. Usually we just switch to a branch and do "git rebase master". But as we are pretending we are only equipped with "git cherry-pick", we do:

After all these operations our commit graph will look like this:

As we can see, commits #6 and #7 were applied against 7254931 (a tip commit of master). HEAD was moved and points a commit which is, essentially, a tip of a rebased branch. Now all we need to do is delete an old branch pointer and create a new one:

test_branch_1 is now rooted from the latest master position. Done!

They're both commands for rewriting the commits of one branch on top of another: the difference is in which branch - "yours" (the currently checked out HEAD) or "theirs" (the branch passed as an argument to the command) - is the base for this rewrite.

git cherry-pick takes a set of commits and replays their commits as coming after yours (your HEAD).

In other words, the two commands are, in their core behavior (ignoring their divergent performance characteristics, calling conventions, and enhancement options), symmetrical: checking out branch bar and running git rebase foo sets the bar branch to the same history as checking out branch foo and running git cherry-pick ..bar would set foo to (the changes from foo, followed by the changes from bar).

Naming-wise, the difference between the two commands can be remembered in that each one describes what it does to the current branch: rebase makes the other head the new base for your changes, whereas cherry-pick picks changes from the other branch and puts them on top of your HEAD (like cherries on top of a sundae).

Both do very similar things; the main conceptual difference is (in simplified terms) that:

Given this initial state:

...and assuming that you want get the commits from the topic branch replayed on top of the current master branch, you have two options:

Of course, here you had to explicitly tell cherry-pick to pick a sequence of commits, using the range notation foo..bar. If you had simply passed the branch name, as in git cherry-pick topic, it would have picked up only the commit at the tip of the branch, resulting in:

2
Is rebase whole branch on top of master is the same as cherry picking every commit from rebased branch?
1
Remove first pushed commit of a branch
1
Is it correct to say that a git rebase is equivalent to a git cherry-pick of certain commits from the other direction?