I have many custom classes that I am using that I will explain and post examples of. After Explaining what they all do I will try to clearly describe the conditions under which my bug is happening.

First, I am using a PropertyGrid to display the properties of several different types of objects. Because the default binding of the PropertyGrid was not what as descriptive as I wanted it to be, I created a few custom classes that I will refer to as "Display" classes. These Display classes are constructed by passing in the an object and then creating properties that return nicely formatted strings and descriptions for the public properties (and in some case methods) of the real object that was passed in.

I will demonstrate this with some abbreviated example code:

Here is an example of an object I want to Display in my PropertyGrid:

The string property "Name" displays fine in the PropertyGrid However The CustomObject and List did not display in way that seemed very user friendly to me.

So I attempted to create a solution by writing this class:

As you can see in the code above, I created special DisplayClasses for both my Joint class and my CustomObject class. In my project I have many, many different kinds of objects that require the same kind of overlaping Display Class properties.

This line solves my problem of displaying the CustomObject how I want to in the propertGrid(almost... more on this later). However it does not work the same way for my Custom List property. On the Custom List it expands to show only Count and capacity(The actual properties of the List) It makes sense why this is, but it was not what I wanted. I wanted to see the actual contained object within the list.

So here is my complicated solution, Taken initially from this question:

I have two classes that I am using to dynamically add objects to the propertyGrid bound list in the form of properties. The first(CustomClass) can be downloaded here. It is used to Dynamically create properties. The second class(DisplayIEnumerable) I am using is derived from the first and can be found here.

The DisplayIEnumerable class loops through the list objects and adds a property to itself with the information contained within the each object. A DisplayClass is passed in to define exactly how those objects properties should be represented within the Grid.

Up to this Point everything works great! as evidenced by this picture(picture was not created using the classes provided, Strings are formatted differently in the classes I am using, removed formatting code to help you focus on the relevant code:

Now after that long intro, the real question. Using the techniques above I would like to write a class that can dynamically handle CustomObjects that I have not written unique display classes for. I am intending to leave this code for those using the application for testing so that they can more effectively test without having to have a complete Display Class for every one of my company's CustomObjects. (there are hundreds) Instead, By binding the propertyGrid with the class below, I hope to have all the properties that are lists and CustomObjects that do have corresponding DisplayClasses to be bound in their place.

Here is the class that I have already tried and have a bug with. I have not yet tried implementing the replacement of Lists with my DisplayIEnumerable class yet, I wanted to get the basic functionality working first:

When run, The PropertyGrid appears as it should:

However, once you click on the Expand arrow, nothing happens, and the arrow disappears:

What is wrong with the class above that is not wrong with my DisplayIEnumerable class, that causes this variance in behaviour?

I am using the DisplayObject class like this(inside a DisplayClass):

Thanks in advance! I will be very impressed if anyone makes it through this question.

You don't have to create special classes to use the property grid. Just decorate the properties with the proper attributes. Here is an example:

Note the ToString is overriden, that's what the property grid uses by default if no TypeConverter is defined for a given type.

One "holder" class that has a collection of custom objects:

Note the custom TypeConverter applied directly to the Objects property. Here is the source:

Note we override ConvertTo and give it a special string that displays a comma-separated list of objects in the list. The GetProperties is also overriden and uses a special PropertyDescriptor; It adds an ExpandableObjectConverter attribute to sub objects so they can be expanded too:

Now, here is some sample code: 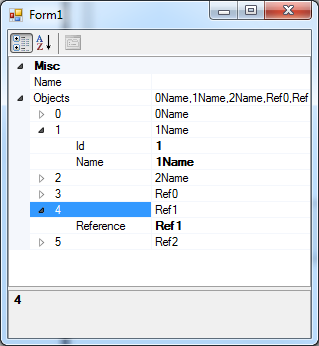 Having worked with TypeConverters myself, I can confirm they are a major pain in the bottom parts. You get nada info about what is actually going wrong, only weird output...

Idk if it helps, but maybe it is a problem that you add an empty (null) array to anything that is not an IEnumerable? Try moving the add instruction into the scope of the if (...). I dont think there is any harm in that.

Also, are you certain that (in the last example with the EndJoint) the getter does not return a null pointer? Blank entries smell like null pointers being passed from my experiences.

Not the answer you're looking for? Browse other questions tagged c# winforms reflection propertygrid or ask your own question.

6710
What is the difference between String and string in C#?
2188
What is reflection and why is it useful?
1101
How do I use reflection to call a generic method?
2601
What are the correct version numbers for C#?
1913
Get int value from enum in C#
973
Get property value from string using reflection
1199
JavaScriptSerializer - JSON serialization of enum as string
995
Deserialize JSON into C# dynamic object?
584
How to determine if a type implements an interface with C# reflection
1449
Why not inherit from List<T>?