I'm a newbie in VBA and Macros. If someone helps me with VBA code and macros, it will be helpful.

Reading all 50-60 mails a day and updating all mails is very much time consuming. All 50-60 mails coming to my inbox will have same subject but from different users. Body of mail will vary.

Since you have not mentioned what needs to be copied, I have left that section empty in the code below.

This will get you started. I have commented the code so that you will not face any problem understanding it.

First paste the below mentioned code in the outlook module.

When the new email arrives not only will the email move to the folder that you specify but data from it will be exported to Excel as well.

To extract the contents from your email body, you can split it using SPLIT() and then parsing out the relevant information from it. See this example

In the previous version of macro "SaveEmailDetails" I used this statement to find Inbox:

I have since installed a newer version of Outlook and I have discovered that it does not use the default Inbox. For each of my email accounts, it created a separate store (named for the email address) each with its own Inbox. None of those Inboxes is the default.

This macro, outputs the name of the store holding the default Inbox to the Immediate Window:

On my installation, this outputs: "Outlook Data File".

I have added an extra statement to macro "SaveEmailDetails" that shows how to access the Inbox of any store.

A number of people have picked up the macro below, found it useful and have contacted me directly for further advice. Following these contacts I have made a few improvements to the macro so I have posted the revised version below. I have also added a pair of macros which together will return the MAPIFolder object for any folder with the Outlook hierarchy. These are useful if you wish to access other than a default folder.

The original text referenced one question by date which linked to an earlier question. The first question has been deleted so the link has been lost. That link was to Update excel sheet based on outlook mail (closed)

There are a surprising number of variations of the question: "How do I extract data from Outlook emails to Excel workbooks?" For example, two questions up on [outlook-vba] the same question was asked on 13 August. That question references a variation from December that I attempted to answer.

For the December question, I went overboard with a two part answer. The first part was a series of teaching macros that explored the Outlook folder structure and wrote data to text files or Excel workbooks. The second part discussed how to design the extraction process. For this question Siddarth has provided an excellent, succinct answer and then a follow-up to help with the next stage.

What the questioner of every variation appears unable to understand is that showing us what the data looks like on the screen does not tell us what the text or html body looks like. This answer is an attempt to get past that problem.

The macro below is more complicated than Siddarth’s but a lot simpler that those I included in my December answer. There is more that could be added but I think this is enough to start with.

The macro creates a new Excel workbook and outputs selected properties of every email in Inbox to create this worksheet: 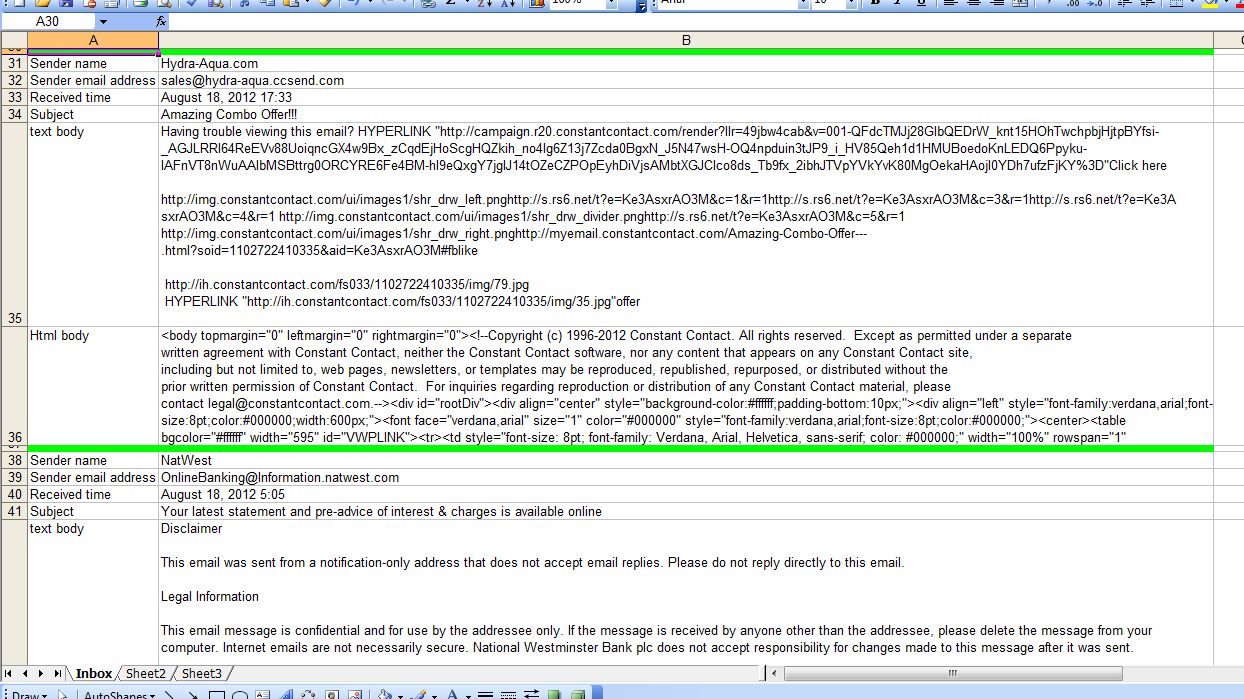 Near the top of the macro there is a comment containing eight hashes (#). The statement below that comment must be changed because it identifies the folder in which the Excel workbook will be created.

All other comments containing hashes suggest amendments to adapt the macro to your requirements.

How are the emails from which data is to be extracted identified? Is it the sender, the subject, a string within the body or all of these? The comments provide some help in eliminating uninteresting emails. If I understand the question correctly, an interesting email will have Subject = "Task Completed".

The comments provide no help in extracting data from interesting emails but the worksheet shows both the text and html versions of the email body if they are present. My idea is that you can see what the macro will see and start designing the extraction process.

This is not shown in the screen image above but the macro outputs two versions on the text body. The first version is unchanged which means tab, carriage return, line feed are obeyed and any non-break spaces look like spaces. In the second version, I have replaced these codes with the strings [TB], [CR], [LF] and [NBSP] so they are visible. If my understanding is correct, I would expect to see the following within the second text body:

Extracting the values from the original of this string should not be difficult.

I would try amending my macro to output the extracted values in addition to the email’s properties. Only when I have successfully achieved this change would I attempt to write the extracted data to an existing workbook. I would also move processed emails to a different folder. I have shown where these changes must be made but give no further help. I will respond to a supplementary question if you get to the point where you need this information.

Latest version of macro included within the original text

Macros not included in original post but which some users of above macro have found useful.

Not the answer you're looking for? Browse other questions tagged excel vba outlook or ask your own question.

9
Update excel sheet based on outlook mail
9
Excel VBA Code to retrieve e-mails from outlook
3
Extract lines 3 and 4 from an email
2
Find “carriage return” in a mail.body
2
Is it possible to delete the signature from a email body, when importing it from outlook to excel using VBA
2
Outlook to Excel hyperlink issue
1
Write Excel file from Outlook Emails
2
Exporting emails from outlook to Excel Including images
0
VBA keeps trying to open Worksheet, but don't want it to
0
Open email in specific folder
See more linked questions