Thanks to this earlier question, I produced a static fixed-layout graph as below using force layout in d3.js: 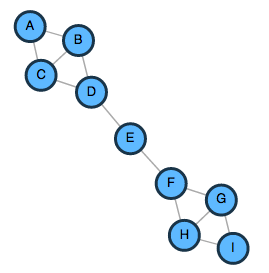 and I have two specific questions to further customize the layout:

First, I notice that initializing nodes positions deterministically (e.g. done diagonally here, see the script for details) fixes the positions of the nodes, and the orientation of the nodes seem to depend on this initialization as well as the dimensions of the force graph*. I wonder how can I make the nodes A, D, E, F, I in the graph above aligned horizontally? In other words, I want to turn the orientation of the graph anti-clockwise for roughly 45 degrees. I have tried to initialize the nodes horizontally in the middle:

but the produced output has all the nodes and edges horizontally at where they were initialized.

(* Note: strangely, when setting .size([w, h]) where w = h for the force graph, and deterministically initializing the nodes along a diagonal, all the nodes and edges are positioned along that diagonal in the output, why?)

Try adding a custom gravity force applied on each tick which pulls the nodes towards the horizontal line. Something like this:

To your second question, I believe, it is not centered, but there is a small gravity force by default which pulls the nodes towards the center.

Not the answer you're looking for? Browse other questions tagged javascript svg graph d3.js force-layout or ask your own question.

1611
Retrieve the position (X,Y) of an HTML element relative to the browser window
6
SVG markers don't orient properly on a d3.svg.diagonal curve used as a D3 force layout link
4
Svg image representing a node, varying node size in a force-directed graph
84
How do I remove all children elements from a node and then apply them again with different color and size?
1
D3 graph with svg nodes - How to move nodes to arbitrary positions
2
d3 force layout link position in node
3
In D3 force-directed layout, how can I position fixed nodes programmatically, without dragging?
1
How to make it so D3 Force Directed Graph generates nodes in same position each time