How to change the path of Python in Spyder?

Press CTRL+SHIFT+ALT+P to open the Preferences window. Within this window, select the Console item on the left, then the Advanced Settings tab. The path to the Python executable will be right there.

With Spyder v. 4.2.5 that comes with Anaconda3 v. 4.10.1, I do not see 'Console' on the left in the Preferences menu (i.e. Tools>Preferences). In this version you can change the path to the python.exe file under Python interpreter on the left. 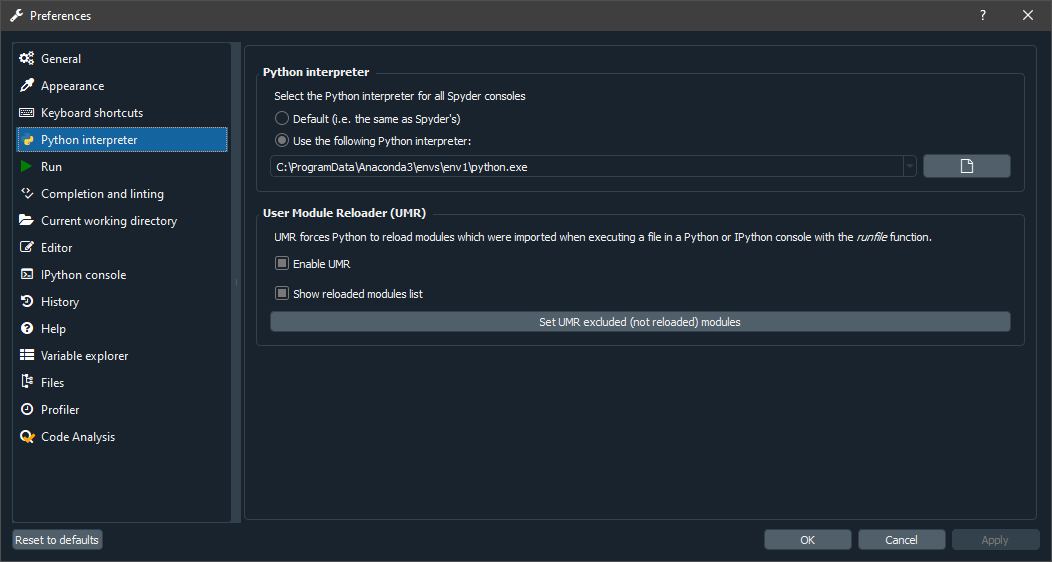 I was having this problem after downloading a new version of Python and trying to use it in my Spyder without Anaconda installed.

Besides changing the path to the python.exe file under Python interpreter on the left as mentioned above by @HerrKaputt and @Pfalbaum. I had to install the spyder-kernels in the new python.

This can be done by running the following command in the cmd-pront (in my case i dont use Anaconda):

If your python is installed in the anaconda. You can try this: Spyder, spyder-kernels and python version compatibilities?

Not the answer you're looking for? Browse other questions tagged python ide path spyder or ask your own question.

6328
How do I merge two dictionaries in a single expression?
1576
How do I import a module given the full path?
6828
What are metaclasses in Python?
12110
What does the "yield" keyword do?
5234
How can I safely create a nested directory?
7352
Does Python have a ternary conditional operator?
3367
Convert bytes to a string
1453
How do I get the filename without the extension from a path in Python?
3031
How to make function decorators and chain them together?
1464
Use different Python version with virtualenv