What are pixels and points in iOS?

The dimensions of the image, taking orientation into account.

What's the difference between pixels and points in iOS?

It also provides a standard system of measurement on iOS devices because no matter how the pixel density changes, there have always been 320x480 points on an iPhone screen and 768x1024 points on an iPad screen.*

But at the same time, you can basically disregard the documentation considering that retina devices were introduced with iOS 4 at a minimum, and I don't know of too many people still running iOS 3 on a newer iPhone. But if such a case arises, your UIImage would need to be rendered at exactly twice its dimensions in pixels on a retina iPhone to make up for the pixel density difference.

*Starting with the iPhone 5, the iPhone's dimensions are now no longer standardized. Please use the appropriate APIs to retrieve the screen's dimensions or use layout constraints.

The Ultimate Guide To iPhone Resolutions 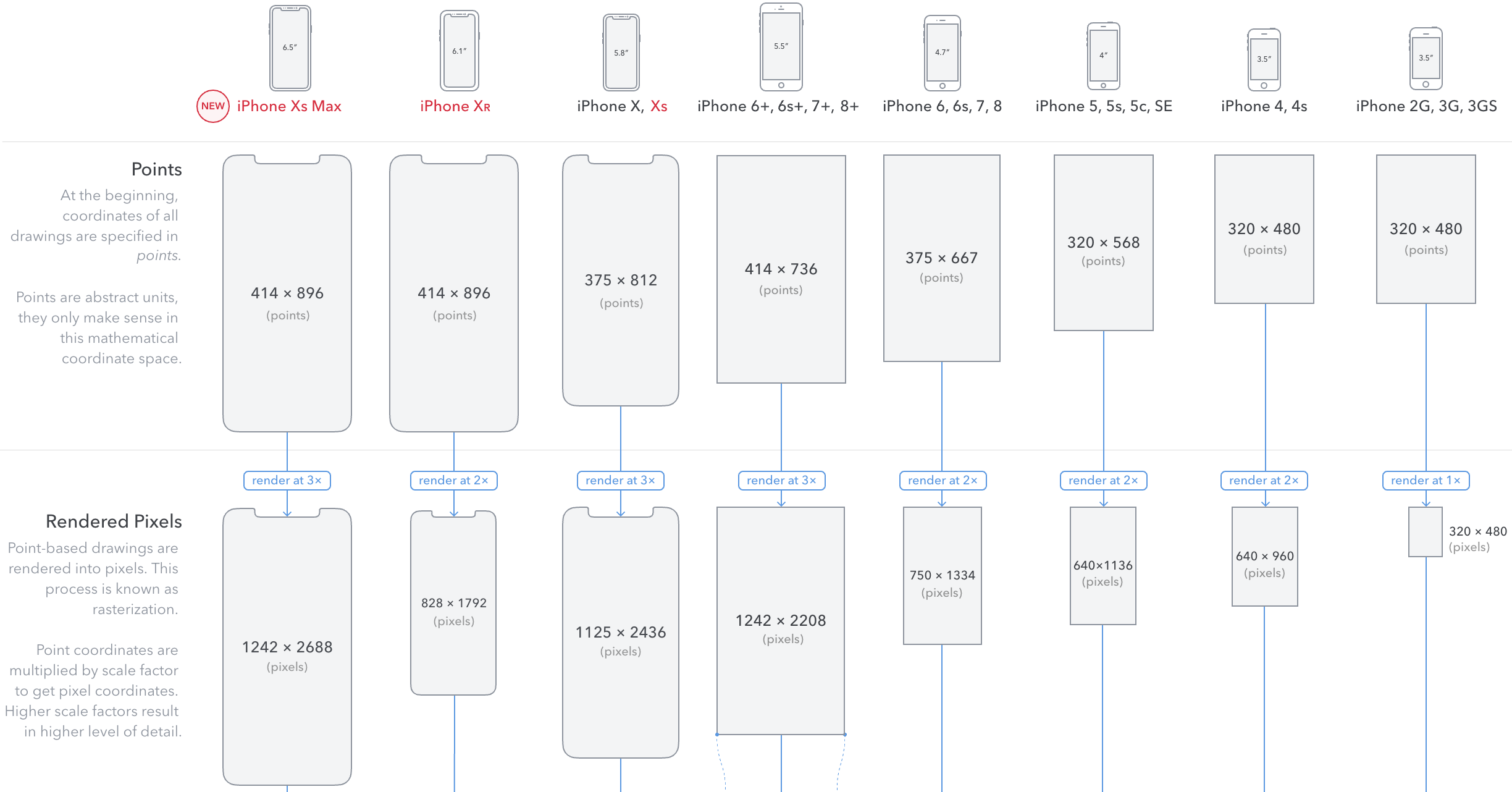 These guys did an awesome job, take a look here — The Ultimate Guide To iPhone Resolutions.

Using data from http://www.paintcodeapp.com/news/ultimate-guide-to-iphone-resolutions I set up the formula sqrt(pointWidth^2+pointHeight^2)/diagonalInches to figure out how many points each phone displayed per inch.

As you can tell a point is roughly the same size on each phone. Using the same webopage, you can set up the same formula with the pixel values, and you'll notice large irregularities due to higher pixel densities on the newer phones.

Not the answer you're looking for? Browse other questions tagged iphone ios pixel or ask your own question.

0
Why the iPhone 5 has the width only of 320 pixels?
23
Correct Image and Font Scale on different Devices?
0
Image size same for all device on UITableview cell
1
Dynamically Moving (Animating) a UITextField
1
UIScreen mainScreen bounds returns iPad 2's bounds on iPad Air 2
1
Why is the size of screen of my iPhone XR 375 × 812?
-2
How to tell Swift to use pixels or points?
0
Why is the point unit in CSS equal to 1.333 pixels?

1038
How to change the name of an iOS app?
1886
What's the difference between the atomic and nonatomic attributes?
1891
How to get screen dimensions as pixels in Android
1355
How to check for an active Internet connection on iOS or macOS?
521
Setting width/height as percentage minus pixels
872
How to check iOS version?
890
Converting pixels to dp
1
iOS - points, pixels and printing
20
iOS: Get displayed image size in pixels