What header defines NULL in C++?

According to C++ primer, <cstdlib> header defines NULL. cpluspplus says it is defined in <cstddef>.

Ultimately, if the right header is not included, I thought NULL can't be referenced.

From what i can see, however it can be referenced and produce programs and that compile and run without warnings or errors, after including only <iostream>

Please help me understand this.

On some implementations, iostream may include cstddef, so including iostream would also give you NULL.

The C++ standard requires that NULL be defined in the c* header corresponding to each of those.

The C standard is very strict about the names a standard can define--each standard header must define precisely the names the standard requires that header to define. The only other names it can define are those that are reserved for the implementation, such as those starting with an underscore followed by another underscore or a capital letter.

From a practical viewpoint, C++ implementations used to take quite a bit of advantage of this permissiveness--that is, including one standard header frequently defined the names from a number of other standard headers. More recent implementations tend to work more like the C standard requires, staying much closer to each header defining only the names required by to be defined by that header. They're still probably not as strict about it as the C standard requires, but much closer than they used to be (as a rule).

It is defined in <cstddef>

[...] The macro NULL is an implementation-deﬁned C++ null pointer constant in this International Standard

The C++11 Standard says NULL must be defined in multiple files. They are:

This is mentioned in Table 149, Section C.3 C standard library/3 of the standard.

Here's an image of the table and some surrounding text. 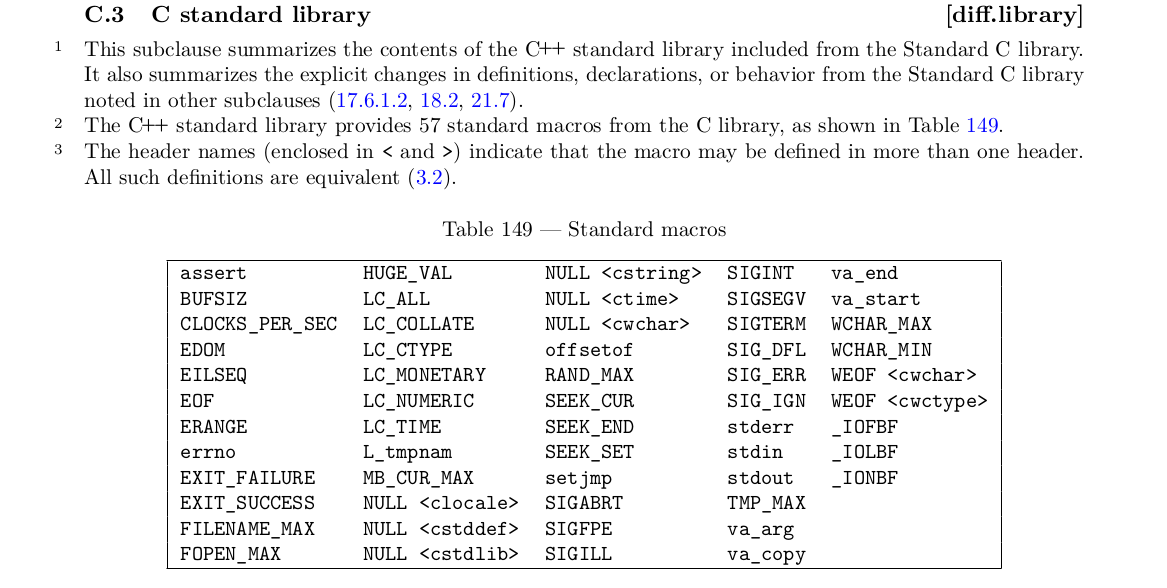 In the latest version of MinGW (MinGW 5.3.0) NULL was defined in the wchar.h header as :

Not the answer you're looking for? Browse other questions tagged c++ null or ask your own question.

81
Why is NULL undeclared?
1
Trying to understand these structures
-3
C++ : NULL changing to 0
0
is it right to use the new operator like this?

3166
What are the differences between a pointer variable and a reference variable in C++?
2805
What does the explicit keyword mean?
2707
How to check empty/undefined/null string in JavaScript?
3940
Avoiding != null statements
4245
The Definitive C++ Book Guide and List
8687
What is the “-->” operator in C++?
2041
How to determine if variable is 'undefined' or 'null'?
2141
Is there a standard function to check for null, undefined, or blank variables in JavaScript?
1835
C++11 introduced a standardized memory model. What does it mean? And how is it going to affect C++ programming?
2200
Why are elementwise additions much faster in separate loops than in a combined loop?