What's the difference between “Layers” and “Tiers”?

What's the difference between "Layers" and "Tiers"?

Logical layers are merely a way of organizing your code. Typical layers include Presentation, Business and Data – the same as the traditional 3-tier model. But when we’re talking about layers, we’re only talking about logical organization of code. In no way is it implied that these layers might run on different computers or in different processes on a single computer or even in a single process on a single computer. All we are doing is discussing a way of organizing a code into a set of layers defined by specific function.

Physical tiers however, are only about where the code runs. Specifically, tiers are places where layers are deployed and where layers run. In other words, tiers are the physical deployment of layers.

Source: Rockford Lhotka, Should all apps be n-tier?

Remember though, that in "Scott World" (which is hopefully your world also :) ) a "Tier" is a unit of deployment, while a "Layer" is a logical separation of responsibility within code. You may say you have a "3-tier" system, but be running it on one laptop. You may say your have a "3-layer" system, but have only ASP.NET pages that talk to a database. There's power in precision, friends.

Layers refer to the logical separation of code. Logical layers help you organize your code better. For example, an application can have the following layers.

The above three layers reside in their own projects, maybe 3 projects or even more. When we compile the projects we get the respective layer DLL. So we have 3 DLLs now.

Depending upon how we deploy our application, we may have 1 to 3 tiers. As we now have 3 DLL's, if we deploy all the DLLs on the same machine, then we have only 1 physical tier but 3 logical layers.

If we choose to deploy each DLL on a separate machine, then we have 3 tiers and 3 layers.

Why always trying to use complex words?

A layer = a part of your code, if your application is a cake, this is a slice.

A tier = a physical machine, a server.

A tier hosts one or more layers.

There are so many benefits to implement a layered architecture. This is tricky and properly implementing a layered application takes time. If you have some, have a look at this post from Microsoft: http://msdn.microsoft.com/en-gb/library/ee658109.aspx

The two-tier pattern represents a client and a server.

Advantages of Layers and Tiers:

Layers are logical separation of related-functionality[code] within an application, Communication between layers is explicit and loosely coupled. [Presentation logic,Application logic,Data Access logic]

Tiers are Physical separation of layers [which get hosted on Individual servers] in an individual computer(process). 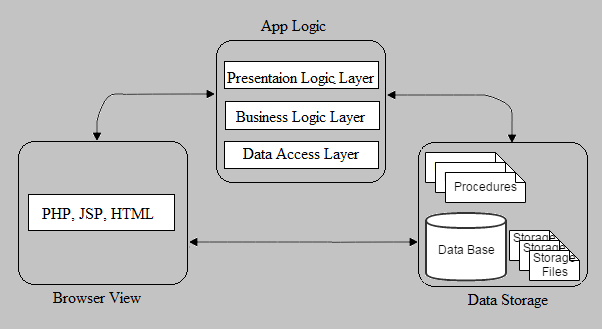 As shown in diagram:

n-Tier advantages:
Better Security
Scalability : As your organisation grows You can scale up your DB-Tier with DB-Clustering with out touching other tiers.
Maintainability : Web designer can change the View-code, with out touching the other layers on the other tiers.
Easily Upgrade or Enhance [Ex: You can add Additional Application Code, Upgrade Storage Area, or even add Multiple presentation Layers for Separate devises like mobile, tablet, pc]

other need like after developing application we need to change dbms or modify business logic etc. then it is necessary to all.

Q * why we use tier architecture?

Just like a bank open in a chamber, in which categories the employee:

they all are the related components of system.

exactly the same concept of layer and tier.

I like the below description from Microsoft Application Architecture Guide 2

Layers describe the logical groupings of the functionality and components in an application; whereas tiers describe the physical distribution of the functionality and components on separate servers, computers, networks, or remote locations. Although both layers and tiers use the same set of names (presentation, business, services, and data), remember that only tiers imply a physical separation.

I use layers to describe the architect or technology stack within a component of my solutions. I use tiers to logically group those components typically when network or interprocess communication is involved.

Technically a Tier can be a kind of minimum environment required for the code to run.

E.g. hypothetically a 3-tier app can be running on

Excel workbook is the minimum required environment for VBA code to run.

Those 3 workbooks can sit on a single physical computer or multiple.

I have noticed that in practice people mean "OS Tier" when they say "Tier" in the app description context.

That is if an app runs on 3 separate OS then its a 3-Tier app.

So a pedantically correct way describing an app would be

Layers are just types of code in respect to the functional separation of duties withing the app (e.g. Presentation, Data , Security etc.)

Layers are conceptual entities, and are used to separate the functionality of software system from a logical point of view; when you implement the system you organize these layers using different methods; in this condition we refer to them not as layers but as tiers.

When you talk about presentation, service, data, network layer, you are talking about layers. When you "deploy them separately", you talk about tiers.

Tiers is all about deployment. Take it this way: We have an application which has a frontend created in Angular, it has a backend as MongoDB and a middle layer which interacts between the frontend and the backend. So, when this frontend application, database application, and the middle layer is all deployed separately, we say it's a 3 tier application.

Not the answer you're looking for? Browse other questions tagged architecture or ask your own question.