I was looking around stackoverflow Non-Trivial Lazy Evaluation, which led me to Keegan McAllister's presentation: Why learn Haskell. In slide 8, he shows the minimum function, defined as:

and states that its complexity is O(n). I don't understand why the complexity is said to be linear if sorting by replacement is O(nlog n). The sorting referred in the post can't be linear, as it does not assume anything about the data, as it would be required by linear sorting methods, such as counting sort.

Is lazy evaluation playing a mysterious role in here? If so, what is the explanation behind it?

In minimum = head . sort, the sort won't be done fully, because it won't be done upfront. The sort will only be done as much as needed to produce the very first element, demanded by head.

In e.g. mergesort, at first n numbers of the list will be compared pairwise, then the winners will be paired up and compared (n/2 numbers), then the new winners (n/4), etc. In all, O(n) comparisons to produce the minimal element.

The above code can be augmented to tag each number it produces with a number of comparisons that went into its production:

Running it for several list lengths we see that it is indeed ~ n:

To see whether the sorting code itself is ~ n log n, we change it so that each produced number carries along just its own cost, and the total cost is then found by summation over the whole sorted list:

Here are the results for lists of various lengths,

The above shows empirical orders of growth for increasing lengths of list, n, which are rapidly diminishing as is typically exhibited by ~ n log n computations. See also this blog post. Here's a quick correlation check:

edit: Lazy evaluation can metaphorically be seen as kind of producer/consumer idiom1, with independent memoizing storage as an intermediary. Any productive definition we write, defines a producer which will produce its output, bit by bit, as and when demanded by its consumer(s) - but not sooner. Whatever is produced is memoized, so that if another consumer consumes same output at different pace, it accesses same storage, filled previously.

When no more consumers remain that refer to a piece of storage, it gets garbage collected. Sometimes with optimizations compiler is able to do away with the intermediate storage completely, cutting the middle man out.

Suppose minimum' :: (Ord a) => [a] -> (a, [a]) is a function that returns the smallest element in a list along with the list with that element removed. Clearly this can be done in O(n) time. If you then define sort as

Of course, as delnan points out, the complexity depends on the implementation of sort.

With eager evaluation, the computational complexities of various algorithms compose in a simple manner. For example, the least upper bound (LUB) for f . g must be the sum of the LUBs for f and g. Thus you can treat f and g as black boxes and reason exclusively in terms of their LUBs.

With lazy evaluation, however, f . g can have a LUB better than the sum of f and g's LUBs. You can't use black-box reasoning to prove the LUB; you must analyze the implementations and their interaction.

Thus the often-cited fact that complexity of lazy evaluation is much harder to reason about than for eager evaluation. Just think about the following. Suppose you're trying to improve the asymptotic performance of a piece of code whose form is f . g. In an eager language, there's on obvious strategy you can follow to do this: pick the more complex of f and g, and improve that one first. If you succeed at that, you succeed at the f . g task.

In a lazy language, on the other hand, you can have these situations:

The explanation depends on the implementation of sort, and for some implementations it will not be true. For instance with an insert sort that inserts at the end of the list, lazy evaluation does not help. So lets choose an implementation to look at, and for the sake of simplicity, lets use selection sort:

The function clearly uses O(n^2) time to sort the list, but since head only needs the first element of the list, sort (delete x xs) is never evaluated!

It's not so mysterious. How much of a list do you need to sort to deliver the first element? You need to find the minimal element, which can easily be done in linear time. As it happens, for some implementations of sort lazy evaluation will do this for you.

One interesting way of seeing this in practice is to trace the comparison function.

I've just run this through Ghci, and its not exactly O(n): it takes 15 comparisons to find the first element, not the 10 that ought to be required. But its still less than O(n log n).

Edit: as Vitus points out below, taking 15 comparisons instead of 10 is not the same as saying its not O(n). I just meant that it takes more than the theoretical minimum.

Inspired by Paul Johnson's answer I plotted the growth rates for the two functions. First I modified his code to print one character per comparison:

Counting the * and # characters we can sample the comparison counts at evenly spaced points (excuse my python):

Running the script would give us the following graph: 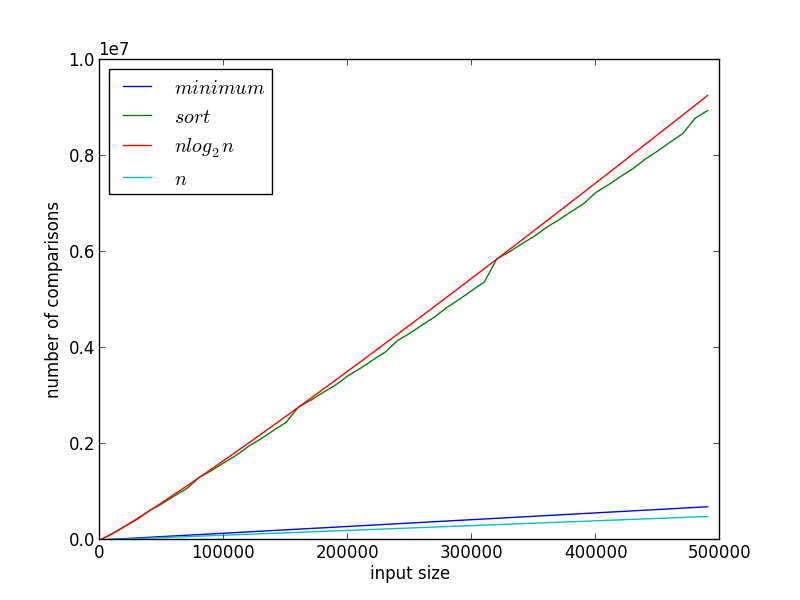 The slope of the lower line is..

Not the answer you're looking for? Browse other questions tagged algorithm sorting haskell lazy-evaluation time-complexity or ask your own question.

33
Non-Trivial Lazy Evaluation
3
How to get the top 10 students in the class using Python dict
7
is this implementation of merge sort good?
2
Does this Haskell example effectively demonstrate laziness?
2
Shell script to output the largest
1
Ordering a List of Pairs

127
Why is lazy evaluation useful?
307
What is Weak Head Normal Form?
33
Non-Trivial Lazy Evaluation
657
How can building a heap be O(n) time complexity?
977
How to find time complexity of an algorithm
13
lazy sorts of iterators in Scala?
9
What requirements does non-strict semantics of Haskell have on the evaluation strategy?
2
Haskell, terminal call optimisation and lazy evaluation
11
Evaluation and space leaks in Haskell