Reverse tree building (with an odd number of children)

I just found out about the AWS Glacier service and wanted to write a small Python application to upload files via the REST API. I took a look at the required headers and stumbled upon x-amz-sha256-tree-hash. I need to calculate the SHA-256 hash of the entire file as well as the hash of the parent of all hashes of each 1 MB chunk. This leads to the following tree: 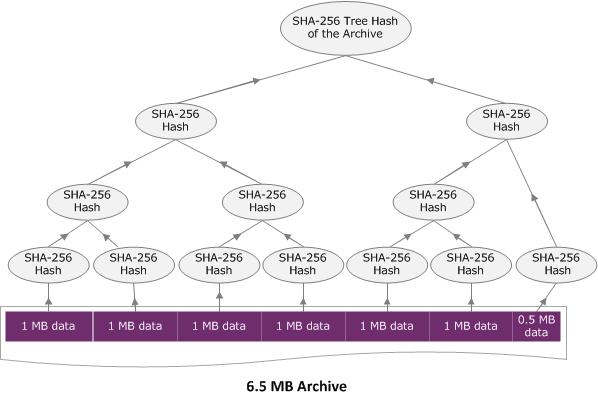 I already made a function that reads 1 MB chunks and a class which calculates their hashes on-the-fly but then I completely struggle:

In my application I made a class called chunk which takes data and calculates a hash in the __init__ method as well as holds parent and children (like a regular tree). When the user opens a file those chunks instances will be generated properly with their respective hashes (in this example that would be 7 chunk instances).

Now I have two big problems that are connected to each other:

I checked out this topic on SO but that method only works with an even children count which is not always given.

Can you help me finding a way/an algorithm/an approach on how to solve this issue?

First calculate the number of levels, then

Make sure to handle None as second argument in hashofthem :)

Not the answer you're looking for? Browse other questions tagged python algorithm hash amazon-web-services hashtree or ask your own question.

1546
How do I check if a string is a number (float)?
135
Which cryptographic hash function should I choose?
1299
Reverse a string in Python
1880
How do I get the number of elements in a list?
44
Hashing a Tree Structure
1126
Easy interview question got harder: given numbers 1..100, find the missing number(s) given exactly k are missing
977
How can I reverse a list in Python?
1081
Ukkonen's suffix tree algorithm in plain English
3
How hash is calculated for commit vs tree vs blobs?