This question came about because code that worked previously in .NET 4.0 failed with an unhandled exception in .NET 4.5, partly because of try/finallys. If you want details, read more at Microsoft connect. I used it as the base for this example, so it might be helpful to reference.

For the people who chose to not read about the details behind this question, here is a very quick look at the conditions where this happened:

This issue is that there are exceptions thrown from the Dispose method of CryptoStream (since they are inside a using statement, these exceptions happen to be thrown from two different finally blocks). When cryptoStream.Dispose() is called by the StreamReader, the CryptographicException is thrown. The second time cryptoStream.Dispose() is called, in its using statement, it throws a ArgumentNullException

The following code removes most of the unnecessary code from the link provided above, and unwinds the using statements into try/finallys to clearly show that they are being throw in finally blocks.

Note: The try/finally correspond to expanded using statements from the referenced code.

It doesn't appear that the CryptographicException catch block is ever executed. However, removing that catch block causes the exception to terminate the runtime.

EDIT: This was updated to the newest revision of the specification. The one I happened to grab off of MSDN had older wording. Lost has been updated to terminated.

"Terminated" makes it seem that the first exception would forever be hidden by the second thrown exception, though it doesn't seem to be what is happening.

I'm sure the question is in here somewhere

Here is where it gets foggy: the spec says that the first exception would be terminated. However, if the second catch block (C2) is removed from the code, the CryptographicException that was supposedly lost, is now an unhandled exception that terminates the program. With the C2 present, the code will not terminate from an unhandled exception, so on the surface it appears to be handling the exception, but the actually exception handling code in the block is never executed.

The questions are basically the same, but re-worded for specificity.

I'm still looking into the actual behavior of this, and many of the answers have been particularly helpful in at least answering parts of the above questions.

Another curious behavior, that happens when you run the code with the catch (CryptographicException) block commented out, is the difference between .NET 4.5 and .NET 3.5. .NET 4.5 will throw the CryptographicException and terminate the application. .NET 3.5, however, seems to behave more according to the C# spec where the exception.

In .NET 3.5, I see what I read in the spec. The exception becomes "lost", or "terminated", since the only thing that ever needs to get caught is the ArgumentException. Because of that the program can continue execution. I only have .NET 4.5 on my machine, I wonder if this happens in .NET 4.0?

So a core requirement in your code snippet is that there is a catch (CryptographicException) in scope. Without it, stage 1 fails and the CLR doesn't know how to resume execution. The thread is dead, usually also terminating the program depending on exception handling policy. None of the finally blocks will execute.

Basically, what's happening when you execute:

... and it wouldn't make sense for the first exception to simply disappear into the ether, just because there was another exception thrown from a different finally block.

This is exactly what happens, based on the C# language specification you quoted. The first exception (CryptographicException) effectively disappears - it's "lost".

You can only reach this state by explicitly using finally, though, so I believe the assumption is that you're providing the error handling with this expectation or possibility in mind (as you're using try at that point, which means you've accepted you may have an exception).

This is basically explained in detail in the spec in 8.9.5 (the text in 8.10 you quoted refers to this section):

If the finally block throws another exception, processing of the current exception is terminated.

The first exception, in your case the ArgumentException, basically "disappears".

As it turns out, I am not crazy. Based on the answers I got to this question, I think it seemed like I was having difficulty understanding what is so clearly outlined in the spec. It's really not at all difficult to grasp.

The truth is that the spec makes sense, while the behavior wasn't. This is seen even more so when you run the code in an older runtime, where it behaves completely different...or at least appears to.

As it turns out, pretty much anybody who would try to answer my question would get the exact same results as I did, so that explains why nobody could answer my question of why the runtime was terminating from an exception that it swallowed.

It's never quite what you expect

Who would have suspected the Just-In-Time debugger?

You may have noticed that running the application under .NET 2 produces a different error dialog than .NET 4. However, if you're like me, you've come to expect that window during the development cycle, and so you didn't think anything of it.

The vsjitdebugger executable was forcibly terminating the application, instead of letting it continue. In the 2.0 runtime, dw20.exe doesn't have this behavior, in fact, the first thing you see is that WER message.

Thanks to the jit debugger terminating the application, it made it seem like it wasn't conforming to what spec says when, in fact, it does.

To test this, I disabled the vsjitdebugger from launching on failure, by changing the registry key at HKEY_LOCAL_MACHINE\SOFTWARE\Microsoft\Windows NT\CurrentVersion\AeDebug\Auto from 1 to 0. Sure enough, the application ignored the exception and continued on, just like .NET 2.0. 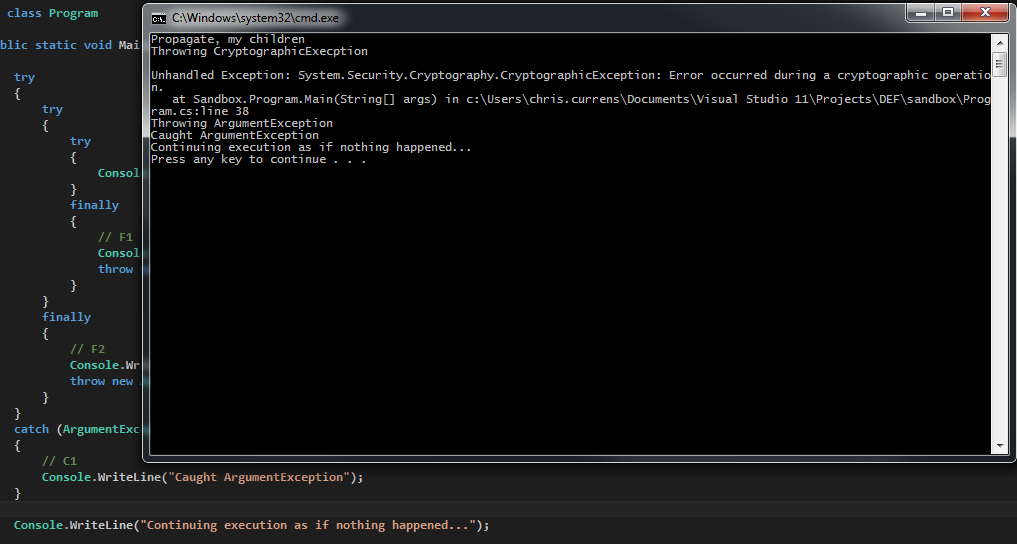 As it turns out, there is a workaround, though there's really no reason to workaround this behavior, since your application is terminating.

Not the answer you're looking for? Browse other questions tagged c# .net specifications .net-4.5 or ask your own question.