I am having issue on PHP where my app is trying to run a php backup file and suddenly getting HTTP Error 500 Code. I have checked the logs and this what it saying.

Anyone knows how to fix this? I'm really stuck in here and can't find solution in internet.

I managed to solved this by adding FcgidBusyTimeout . Just in case if anyone have similar issue with me.

Here is my settings on my apache.conf:

I had very similar errors in the Apache2 log files:

After checking the wrapper scripts and Apache2 settings, I realized that /var/www/ did not have accordant permissions. Thus the FCGId Wrapper scripts could not be read at all.

For my scenario chmod -o+rx /var/www was required of course, since the used SuExec users are not member of www-data user group - and they should not be member for security reasons of course.

in your ./configure statement, excerpt from the php.net doc:

If this is enabled, the CGI module will be built with support for FastCGI also. Available since PHP 4.3.0

As of PHP 5.3.0 this argument no longer exists and is enabled by --enable-cgi instead. After the compilation the ./php-cgi -v should look like this:

I had this issue and realized that the file cgi-bin/php-fcgi had no execution rights.

Setting the correct mode was impossible (probably because the file was opened or sth), so I copied that file from another domain directory where it had proper rights already set and that fixed everything.

I had the same problem with a different and simple solution.

I installed PHP 5.6 following the accepted answer to this question on Ask Ubuntu. After using Virtualmin to switch a particular virtual server from PHP 5.5 to PHP 5.6, I received a 500 Internal Server Error and had the same entries in the apache error log:

Installing the packet and reloading apache solved the problem:

Then use service apache2 reload to apply the configuration.

The famous Moodle "replace.php" script can generate this situation too. For me it was taking ages to run and then failed with a 500 message in the browser and also with the above error message in my apache error log file.

I followed up on @james-wise answer: FcgidBusy is readably described in the Apache documentation. I tried this: doubled the amount of time which apache would give my script to run, by inserting the following line in /etc/apache2/mods-available/fcgid.conf

Then I restarted Apache and tried to run my replace.php script again.

Fortunately this time the script instance ran to completion, so for my purposes this served as a solution.

I came across this one while debugging a virtualmin/apache related error.

In my case, I am running virtualmin and had in my virtual machine's php.ini safe_mode=On.

In my Virtual Machine's error log, I was getting the fcgi Connection reset by peer: mod_fcgid: error reading data from FastCGI server

In my main apache error log I was getting: PHP Fatal error: Directive 'safe_mode' is no longer available in PHP in Unknown on line 0

In my case, I simply set safe_mode = Off in my php.ini and restarted apache.

Not in this questions askers case but often:

What does the "premature end of script headers" error mean?

That error means that the FCGI call was exited unexpectedly.

In some cases it means that the script "backup.php" did crash.

How to fix this?

If the crash of a script was the cause, fix the script so that it does not crash. Then this error is fixed, too. To find out if and why a script crashes, you need to debug it. For example you can check the PHP error log. Errors logged to STDERR normally go into the error handler of the FCGI.

I had the same problem with long-running scripts with the error messages "Premature end of script headers: index.php" and "Connection reset by peer: mod_fcgid: error reading data from FastCGI server" in error_log. After hours of testing this helps for me (CentOS 6, PHP-FPM 7, Plesk 12.5.30):

Set a higher running time. In my case 600 seconds

In CentOS releases suexec is compiled to run only in /var/www. If you try to set a DocumentRoot somewhere else you have to recompile it - the error in apache log are: (104)Connection reset by peer: mod_fcgid: error reading data from FastCGI server Premature end of script headers: php5.fcgi

Check /var/lib/php/session and its permissions. This dir should be writable by user so the session can be stored

As already mentioned this could be happening due to fcgi handler permission issues. If you're using suexec - don't forget to check if apache has this module enabled. 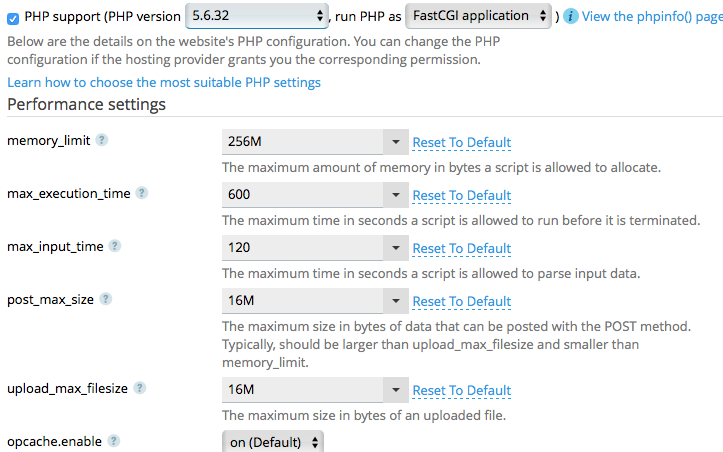 If you're on a shared server like me the host said it was a result of hitting memory limits, so they kill scripts which results in the "Premature end of script headers" seen in this error. They referred me to this:

Given an increase in memory, the issues went. I think a backup plugin Updraft on wordpress was perhaps over zealous in its duty/settings.

In my case I was using a custom extension for my PHP files and I had to edit /etc/apache2/conf-available/php7.2-fpm.conf and add the following code:

I've tried the majority of answers that I've found on this issue. My issue was with wp-cron.php executing a particular function.

I used this related question and suggested answer to help me find out how to adjust the fcgid.conf memory limit utilizing the command line.

Upon trying to troubleshoot the limits on the fcgid.conf file (/etc/httpd/conf.d/fcgid.conf) and restarting apache gracefully, I found that there was no change.

After seeing that other cron jobs were running properly, I decided to refer back to my function declared in functions.php and found that some of the arguments declared were not being specified properly, so there was a loop occurring that would eventually lead to the timeout.

Upon fixing this and running the cron again, it ran as it should.

Hope this helps someone else in a similar position!

I got the same problem (with Plesk 12 installed). However, when i switched from execute PHP as FastCGI to Apache Module the website worked.

I hope it can help you.

Not the answer you're looking for? Browse other questions tagged php apache mod-fcgid or ask your own question.