Could someone explain to me the meaning of @classmethod and @staticmethod in python? I need to know the difference and the meaning.

As far as I understand, @classmethod tells a class that it's a method which should be inherited into subclasses, or... something. However, what's the point of that? Why not just define the class method without adding @classmethod or @staticmethod or any @ definitions?

Though classmethod and staticmethod are quite similar, there's a slight difference in usage for both entities: classmethod must have a reference to a class object as the first parameter, whereas staticmethod can have no parameters at all.

Let's assume an example of a class, dealing with date information (this will be our boilerplate):

This class obviously could be used to store information about certain dates (without timezone information; let's assume all dates are presented in UTC).

Here we have __init__, a typical initializer of Python class instances, which receives arguments as a typical instancemethod, having the first non-optional argument (self) that holds a reference to a newly created instance.

We have some tasks that can be nicely done using classmethods.

Let's assume that we want to create a lot of Date class instances having date information coming from an outer source encoded as a string with format 'dd-mm-yyyy'. Suppose we have to do this in different places in the source code of our project.

So what we must do here is:

For this purpose, C++ can implement such a feature with overloading, but Python lacks this overloading. Instead, we can use classmethod. Let's create another "constructor".

Let's look more carefully at the above implementation, and review what advantages we have here:

What about staticmethod? It's pretty similar to classmethod but doesn't take any obligatory parameters (like a class method or instance method does).

Let's look at the next use case.

We have a date string that we want to validate somehow. This task is also logically bound to the Date class we've used so far, but doesn't require instantiation of it.

Here is where staticmethod can be useful. Let's look at the next piece of code:

So, as we can see from usage of staticmethod, we don't have any access to what the class is---it's basically just a function, called syntactically like a method, but without access to the object and its internals (fields and another methods), while classmethod does.

Rostyslav Dzinko's answer is very appropriate. I thought I could highlight one other reason you should choose @classmethod over @staticmethod when you are creating an additional constructor.

In the example above, Rostyslav used the @classmethod from_string as a Factory to create Date objects from otherwise unacceptable parameters. The same can be done with @staticmethod as is shown in the code below:

Thus both new_year and millenium_new_year are instances of the Date class.

But, if you observe closely, the Factory process is hard-coded to create Date objects no matter what. What this means is that even if the Date class is subclassed, the subclasses will still create plain Date objects (without any properties of the subclass). See that in the example below:

datetime2 is not an instance of DateTime? WTF? Well, that's because of the @staticmethod decorator used.

In most cases, this is undesired. If what you want is a Factory method that is aware of the class that called it, then @classmethod is what you need.

Rewriting Date.millenium as (that's the only part of the above code that changes):

ensures that the class is not hard-coded but rather learnt. cls can be any subclass. The resulting object will rightly be an instance of cls.
Let's test that out:

The reason is, as you know by now, that @classmethod was used instead of @staticmethod

@classmethod means: when this method is called, we pass the class as the first argument instead of the instance of that class (as we normally do with methods). This means you can use the class and its properties inside that method rather than a particular instance.

@staticmethod means: when this method is called, we don't pass an instance of the class to it (as we normally do with methods). This means you can put a function inside a class but you can't access the instance of that class (this is useful when your method does not use the instance).

When to use each

@staticmethod function is nothing more than a function defined inside a class. It is callable without instantiating the class first. It’s definition is immutable via inheritance.

here is good link to this topic.

You don't need either decorator. But on the principle that you should minimize the number of arguments to functions (see Clean Coder), they are useful for doing just that.

For both instance methods and class methods, not accepting at least one argument is a TypeError, but not understanding the semantics of that argument is a user error.

and this will work.)

dotted lookups on instances and classes:

A dotted lookup on an instance is performed in this order - we look for:

Note, a dotted lookup on an instance is invoked like this:

and methods are callable attributes:

The argument, self, is implicitly given via the dotted lookup.

You must access instance methods from instances of the class.

The argument, cls, is implicitly given via dotted lookup.

You can access this method via an instance or the class (or subclasses).

No arguments are implicitly given. This method works like any function defined (for example) on a modules' namespace, except it can be looked up

Each of these are progressively more restrictive in the information they pass the method versus instance methods.

Use them when you don't need the information.

This makes your functions and methods easier to reason about and to unittest.

Which is easier to reason about?

The functions with fewer arguments are easier to reason about. They are also easier to unittest.

These are akin to instance, class, and static methods. Keeping in mind that when we have an instance, we also have its class, again, ask yourself, which is easier to reason about?:

Here are a couple of my favorite builtin examples:

The str.maketrans static method was a function in the string module, but it is much more convenient for it to be accessible from the str namespace.

The dict.fromkeys class method returns a new dictionary instantiated from an iterable of keys:

When subclassed, we see that it gets the class information as a class method, which is very useful:

Use static methods when you don't need the class or instance arguments, but the function is related to the use of the object, and it is convenient for the function to be in the object's namespace.

Use class methods when you don't need instance information, but need the class information perhaps for its other class or static methods, or perhaps itself as a constructor. (You wouldn't hardcode the class so that subclasses could be used here.)

One would use @classmethod when he/she would want to change the behaviour of the method based on which subclass is calling the method. remember we have a reference to the calling class in a class method.

@staticmethod A way to write a method inside a class without reference to the object it is being called on. So no need to pass implicit argument like self or cls. It is written exactly the same how written outside the class, but it is not of no use in python because if you need to encapsulate a method inside a class since this method needs to be the part of that class @staticmethod is comes handy in that case.

A comparison between these two methods can be as below 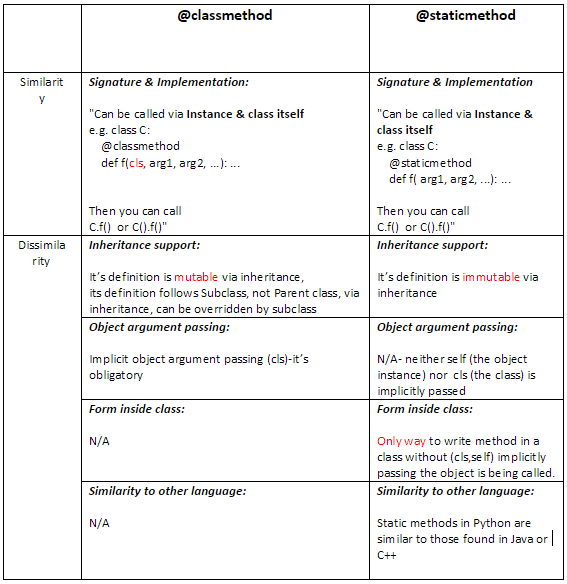 @classmethod may be compared with __init__. You could think it is another __init__(). It is the way python realize class constructor overloading in c++.

notice they both has a reference for class as first argument in definitioin while __init__ use self but construct_from_func use cls conventionally.

@staticmethod may be compared with object method

I'm a beginner on this site, I have read all above answers, and got the information what I want. However, I don't have the right to upvote. So I want to get my start on StackOverflow with the answer as I understand it.

A slightly different way to think about it that might be useful for someone... A class method is used in a superclass to define how that method should behave when it's called by different child classes. A static method is used when we want to return the same thing regardless of the child class that we are calling.

In short, @classmethod turns a normal method to a factory method.

Let's explore it with an example:

Without a @classmethod,you should labor to create instances one by one and they are scattered.

As for example with @classmethod

See? Instances are successfully created inside a class definition and they are collected together.

In conclusion, @classmethod decorator convert a conventional method to a factory method,Using classmethods makes it possible to add as many alternative constructors as necessary.

Class method can modify the class state,it bound to the class and it contain cls as parameter.

Static method can not modify the class state,it bound to the class and it does't know class or instance

3894
Difference between staticmethod and classmethod
1467
Interface vs Abstract Class (general OO)
671
How to call a Parent Class's method from Child Class in Python?
2817
“Least Astonishment” and the Mutable Default Argument
1417
What is the meaning of single and double underscore before an object name?
998
How does Python's super() work with multiple inheritance?
1131
Creating a singleton in Python
75
Module function vs staticmethod vs classmethod vs no decorators: Which idiom is more pythonic?
1503
Why not inherit from List<T>?