Transform color scale, but keep a nice legend with ggplot2

I have seen somewhat similar questions to this, but I'd like to ask my specific question as directly as I can:

I have a scatter plot with a "z" variable encoded into a color scale:

As you can see, since the "z" variable is normally distributed, very few of the points are colored with the "extreme" colors of the distribution. This is as it should be, but I am interested in emphasizing difference. One way to do this would be to use:

By applying rank() to the "z" variable, I get a much greater emphasis on minor differences within the "z" variable. One could imagine using any transformation here, instead of rank, but you get the idea.

My question is, essentially, what is the most straightforward way, or the most "true ggplot2" way, of getting a legend in the original units (units of z, as opposed to the rank of z), while maintaining the transformed version of the colored points?

I have a feeling this uses rescaler() somehow, but it is not clear to me how to use rescaler() with arbitrary transformations, etc. In general, more clear examples would be useful.

Thanks in advance for your time.

Have a look at the package scales especially ?trans

I think that scale_colour_continuous(trans = probability_trans(distribution = 'norm') should work, but it throws warnings.

So I defined a new transformation (see ?trans_new)

I have to define a transformation and an inverse 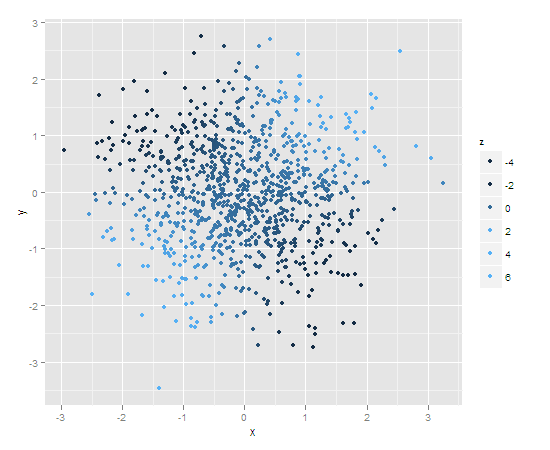 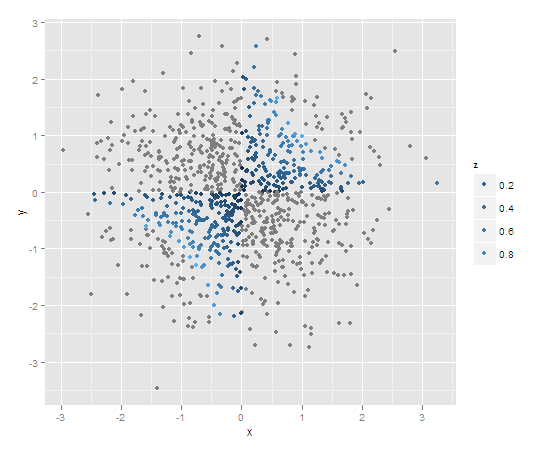 207
Emulate ggplot2 default color palette
111
ggplot2 legend to bottom and horizontal
150
Add legend to ggplot2 line plot
4
How can I change the colors in a ggplot2 density plot?
139
increase legend font size ggplot2
5
colors for two geom_point() in ggplot2 when using aes_string
2
Adding a legend to a ggplot2 geom_tile plot based on size
1
Color points by date in ggplot2
0
ggplot2: Fix legend for logarithmic color scale