Are there programmable barcode readers which I can put program in it. With that program I can tell the reader what are the valid codes. So the reader will refuse to read invalid codes.

Or, with that program, I can encrypt the codes it read.

And, can I use Java to make the program?

There are various types of bar code readers from hand held scanners to counter top scanners to scanner attachments for mobile computers. Most use a USB connection though some use a Serial Port connection. Some are attached to a portable device such as a tablet and some such as a hand held scanner are plugged in. Some hand held bar code readers can also be used as a standing scanner which stands on the counter and do not have to be held.

The two major types of bar codes that I have seen are the standard bar code with the vertical lines of varying widths - see also bar code types from GS1.org - and the QR code from Denso Wave. Commercial point of sale scanners such as counter top or hand held scanners are designed for standard bar code with some also offering the ability to read QR codes. However not all hand held scanners can read QR codes.

Normally the bar code reader will scan the bar code and generate a text string which is then processed by some other device such as a point of sale terminal. I have not seen a bar code scanner that will allow a Java program or similar programatic changes. However there are kiosk type or small devices with a built in scanner which are programmable. See this selection from Symbol.

Some types of scanners will have an OLE for Retail POS OPOS Service Object that can be used with an OPOS Control Object. This approach provides device independence for your software since you would write your application to use the OPOS Control Object interface which solves a number of interface issues such as talking to the device using the HID USB interface. However OPOS is a COM type of interface which may be difficult with the Java programming language. Search for information on UnifiedPOS to find your way to the latest standards.

Hand held scanners will have factory settings out of the box and these settings may not be suitable for your application. The hand held scanners I have used can be programmed and their settings changed by a procedure in which special scan codes are scanned in a particular sequence. Normally the user manual for the particular scanner will have an appendix or two with the documentation as to what settings can be changed, the procedure or steps to use to make changes, and the bar codes to be scanned for the procedure steps. You will probably need to search the manufacturer's web site for the appropriate manual.

For instance the Motorola LS2208 Product Reference Guide contains various sections on setting up that hand held scanner for various environments and scanner applications. The following screen shot from a page of the guide shows the bar codes used to set up the device for USB interface. 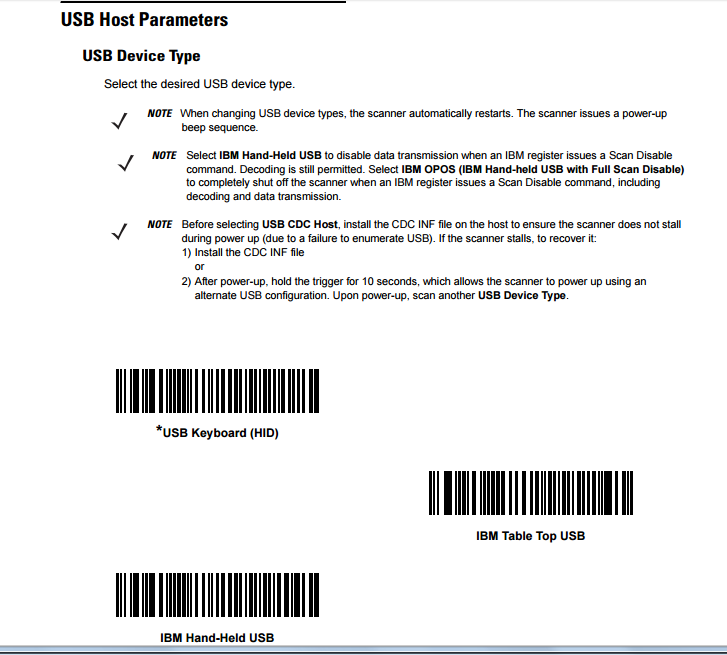 Another option would be to have an application on a phone that uses a phone camera as the bar code scanner. However it appears that most cameras are not good for standard bar codes.

Most scanners for retail systems are fairly complex with lasers for the actual scanning. I have used several different types with point of sale application and they are all fairly easy to use. You can change the settings by entering commands using a set of bar codes which are part of the documentation. These settings are for such things as bar code symbology, prefix characters, suffix characters (prefix and suffix characters are used with wedge keyboard type of interface).

See this forum discussion on using a camera for standard bar codes.

Not the answer you're looking for? Browse other questions tagged barcode-scanner or ask your own question.

0
What are some good programmable barcode scanners?