I'm currently trying to implement a Java client to an SPNEGO protected web service using the SPNEGO library from SourceForge (the server is using the same library). I can not get it to authenticate successfully, my requests always end up as

This is similar to the symptoms that I get when accessing the web service from a browser with an inappropriate hostname, and indeed some debugging in Wireshark reveals that the client sends a wrong SPN with the request - I send to service-test.client.com, which is registered as an SPN and has an A record in DNS, but is registered in the Windows domain as server-1234.client.corp. Even though I send my request to http://service-test.client.com (see matching Host header), the SPN that Java requests a ticket for is the "internal" Windows name: 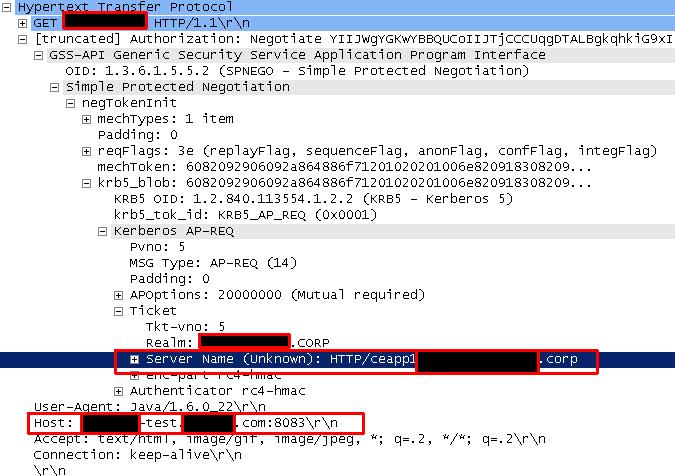 The same sent from Chrome or IE has matching Host headers and SPNs: 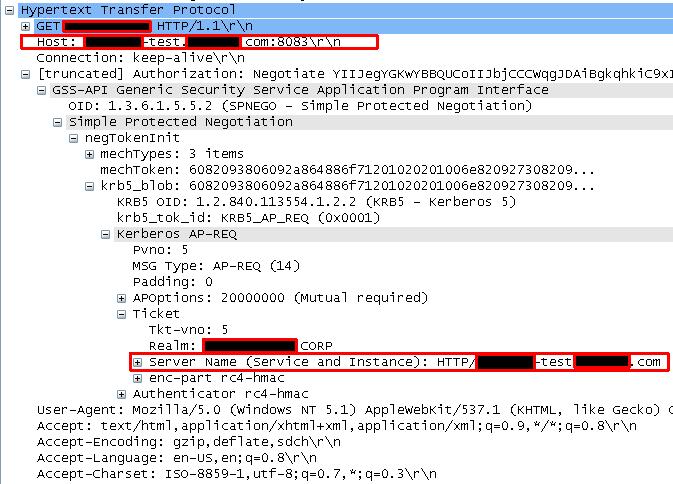 Since there is none of this translation occurs in my code or the SPNEGO library, I presume it must be happening somehwere in the JRE. I've been looking into the JGSS source, but it's a bit hard to understand. Can anyone tell me how to skip this translation and get tickets for the correct SPN?

Summary from the comments above:

Recheck your DNS. Do a reverse lookup. Most problems occur from incorrect reverse DNS entries.

When a SPN for a host-based service is constructed with GSS-API you have to canonicalize that name with the target mechanism. The RFC says

When a reference to a name of this type is resolved, the "hostname" may (as an example implementation strategy) be canonicalized by attempting a DNS lookup and using the fully-qualified domain name which is returned, or by using the "hostname" as provided if the DNS lookup fails. The canonicalization operation also maps the host's name into lower-case characters.

Where the Kerberos 5 RFC says:

server and when transmitted. Thus, for example, one should not rely on an unprotected DNS record to map a host alias to the primary name of a server, accepting the primary name as the party that one intends to contact, since an attacker can modify the mapping and impersonate the party.

Implementations of Kerberos and protocols based on Kerberos MUST NOT use insecure DNS queries to canonicalize the hostname components of the service principal names (i.e., they MUST NOT use insecure DNS queries to map one name to another to determine the host part of the principal name with which one is to communicate). In an environment without secure name service, application authors MAY append a statically configured domain name to unqualified hostnames before passing the name to the security mechanisms, but they should do no more than that. Secure name service facilities, if available, might be trusted for hostname canonicalization, but such canonicalization by the client SHOULD NOT be required by KDC implementations.

Implementation note: Many current implementations do some degree of canonicalization of the provided service name, often using DNS even though it creates security problems. However, there is no consistency among implementations as to whether the service name is case folded to lowercase or whether reverse resolution is used. To maximize interoperability and security, applications SHOULD provide security mechanisms with names that result from folding the user- entered name to lowercase without performing any other modifications or canonicalization.

It seems like GSS-API impls may canonicalize but Kerberos should not do so if the DNS is untrusted. So it depends. It's perfectly natural that a reverse lookup is done. This is how Kerberos verifies the hostname. This is actually crucial if you are running DNS round-robin. Without that it won't never be able to construct the real SPN.

Though I would really as this on a Kerberos mailing list. This is a very interesting point.

I have checked the MIT Kerberos implementation and there is the method krb5_sname_to_principal which actually does this if you check the source code in sn2princ.c:

Not the answer you're looking for? Browse other questions tagged java windows kerberos spnego spn or ask your own question.

4165
What are the differences between a HashMap and a Hashtable in Java?
7448
Is Java "pass-by-reference" or "pass-by-value"?
3784
How do I efficiently iterate over each entry in a Java Map?
3508
What is the difference between public, protected, package-private and private in Java?
4300
Avoiding NullPointerException in Java
4531
How do I read / convert an InputStream into a String in Java?
3467
When to use LinkedList over ArrayList in Java?
3930
How do I generate random integers within a specific range in Java?
3376
How do I convert a String to an int in Java?
3597
How can I create a memory leak in Java?