correlation in matlab between two matrices 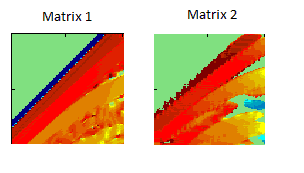 note: I do not have the matlab statistic toolbox

Let's start with your second point because it is more clear, what you want there. You want to do a point-by-point comparison of two images, say, A and B. This boils down to measuring the similarity of two scalars a and b. Let's assume that these scalars are from the interval [0, Q], where Q depends on your image format (Q == 1 or Q == 255 are common in Matlab).

Now, the simplest measure of distance is the difference d = |a - b|. You might want to normalize this to [0, 1] and also invert the values to measure similarity instead of distance. In Matlab:

You mentioned about ignoring the zeros in the images. Well, you need to define, what similarity measure you expect for a zero. One possibility is to set the similarity to zero, whenever one pixel is zero:

You run into problems, if both matrices have a zero-value pixel at the same location. Again, there are several possibilities: You can augment the sum with a small positive value alpha (e.g. alpha = 1e-6) which prevents a division by zero: D = abs(A - B) ./ (alpha + A + B).

Another option is to ignore the infinite values in D and add your 'zero-processing' here, i.e.

You see, there are plenty of possibilities.

You should definitly think more about this point and come up with a better description of what to compute. If your matrices are of size m x m, you have m^2 variables. From this you could compute a correlation matrix m^2 x m^2, which measures the correlation of every pixel to every other pixel. This matrix will also have the largest values in the diagonal (these are the variances). However, I would not suggest to compute the correlation matrix if you only have two realisations.

Another option is to measure the similarity of rows or columns in the two images. Then you end up with a vector 1 x m of correlation coefficients.

However, I do not know how to compute a correlation matrix of size m x m from two inputs of size m x m, which has the largest values in the diagonal.

To just get a general correlation coefficient I'd use corr2. From the docs:

Returns the correlation coefficient r between A and B, where A and B are matrices or vectors of the same size. r is a scalar double.

Not the answer you're looking for? Browse other questions tagged matlab matrix correlation or ask your own question.