I'm running into trouble trying to blur part of the screen in my iOS app. See image for better idea of what I'm trying to do. 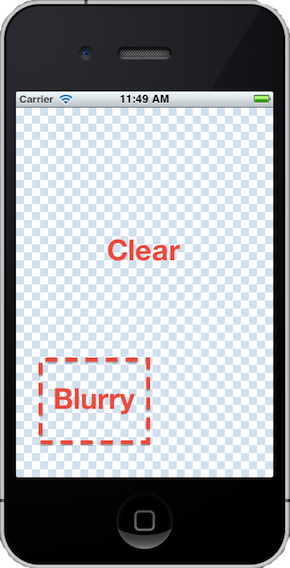 Only the content of the "BlurBox" needs to be blurry but the rest can be clear. So if you were looking at table view, only the content underneath the BlurBox would be blurry (even as you scroll). The rest would look clear.

My first approach was to call UIGraphicsGetImageFromCurrentImageContext() every .01s to get all the layers under the BlurBox mushed into one image. Then blur that image and display it onto of everything.

The methods i've tried for blurring are:

As well as a few custom attempts. I've also looked at Apple's GLImageProcessing but I think that it is a bit overkill for what I'm trying to do here.

The problem is that they are all to slow. The app is not going on the app store so I'm open to using any private/undocumented frameworks.

A kind of far out idea I had was to override the drawRect method of all the components I use (UITableViewCells, UITableView, etc) and blur each of them independently on the fly. However this would take some time, does this even sound like a viable option?

I have tried to use CIFilters as follows:

This does work, however it is incredibly slow. :(

I am seeing that some implementations will blur only when I pass in an image loaded from disk. If I pass in a UIImage that I created from using UIGraphicsGetImageFromCurrentImageContext() it doesn't work. Any ideas on why this would be?

I have tried patel's suggestion as follows:

However, it doesn't work :(

I have managed to get the BlurBox working correctly using TomSoft1's stackblur since he added the ability to normalize an image to RGBA format (32 bits/pixel) on the fly. However, it is still pretty slow.

I have a timer calling an update every 0.03s to grab the image of what's underneath the BlurBox, blur that image, and display it on screen. I need help on boosting the "fps" on the BlurBox.

I would recommend Brad Larson's GPUImage which is fully backed by the GPU for a wide variety of image processing effects. It's very fast, and even fast enough that in his demo app he does real-time video processing from the camera and the frame-rate is excellent.

Here is a code snippet I wrote to apply a basic box blur which blurs the bottom and top thirds of the image but leaves the middle of the image un-blurred. His library is extremely extensive and contains almost every kind of image filter effect imaginable.

Though it may be a bit late to respond, You can use Core Image filters. The reason it is so slow is this line.

"Don’t create a CIContext object every time you render. Contexts store a lot of state information; it’s more efficient to reuse them."

My personal solution to this is to make a Singleton for the Core Image Context. So I only ever create one.

My code is in this demo project on GitHub.

Feel free to use it, or find another solution to your liking. The slowest part I've found in CoreImage is the context, Image processing after that is really fast.

I haven't tested this but I wonder if you could place a CALayer where you want the box to be blurred and then find a useful CIFilter that you can set on the CALayer's backgroundFilters. Just a thought.

You might try the Apple Core Image Filter (CIFilter) set of routines. They require iOS 5, so you might not be able to use them.

I am not sure if it is faster then the methods you have tried, but I have used it in projects in the past, and it works really well. If you can grab the part of the screen you want to make blurry, put that into an image, pass it through a filter, and then re-display it at the appropriate place on the screen, that should work.

I used the filters to change the colors of an image in real-time, and it worked well.

Have you tried this library:

It uses the vDSP/Accelerate framework and seems easy to use.

Not the answer you're looking for? Browse other questions tagged objective-c image image-processing uiimageview core-graphics or ask your own question.

3
Very slow UIImage blurring on iOS
1
iOS: how can I make a part of UIImage blurry?
1
Using GaussianBlur on image in viewDidLoad blocks UI
1
CAShapeLayer background-color fading to sides in Swift