Is there a "right" way to have NSTextFieldCell draw vertically centered text?

I have an NSTableView with several text columns. By default, the dataCell for these columns is an instance of Apple's NSTextFieldCell class, which does all kinds of wonderful things, but it draws text aligned with the top of the cell, and I want the text to be vertically centered in the cell.

There is an internal flag in NSTextFieldCell that can be used to vertically center the text, and it works beautifully. However, since it is an internal flag, its use is not sanctioned by Apple and it could simply disappear without warning in a future release. I am currently using this internal flag because it is simple and effective. Apple has obviously spent some time implementing the feature, so I dislike the idea of re-implementing it.

So; my question is this: What is the right way to implement something that behaves exactly like Apple's NStextFieldCell, but draws vertically centered text instead of top-aligned?

For the record, here is my current "solution":

The other answers didn't work for multiple lines. Therefore I initially continued using the undocumented cFlags.vCentered property, but that caused my app to be rejected from the app store. I ended up using a modified version of Matt Bell's solution that works for multiple lines, word wrapping, and a truncated last line:

(This code assumes ARC; add an autorelease after attrString.mutableCopy if you use manual memory management)

Overriding NSCell's -titleRectForBounds: should do it -- that's the method responsible for telling the cell where to draw its text:

For anyone attempting this using Matt Ball's drawInteriorWithFrame:inView: method, this will no longer draw a background if you have set your cell to draw one. To solve this add something along the lines of

to the beginning of your drawInteriorWithFrame:inView: method.

FYI, this works well, although I haven't managed to get it to stay centered when you edit the cell... I sometimes have cells with large amounts of text and this code can result in them being misaligned if the text height is greater then the cell it's trying to vertically center it in. Here's my modified method:

No. The right way is to put the Field in another view and use auto layout or that parent view's layout to position it.

Though this is pretty old question...

I believe default style of NSTableView implementation is intended strictly for single line text display with all same size & font.

In that case, I recommend,

Maybe you will get quietly dense rows. And then, give them padding by setting intercellSpacing.

Here what you'll get with two property adjustment. 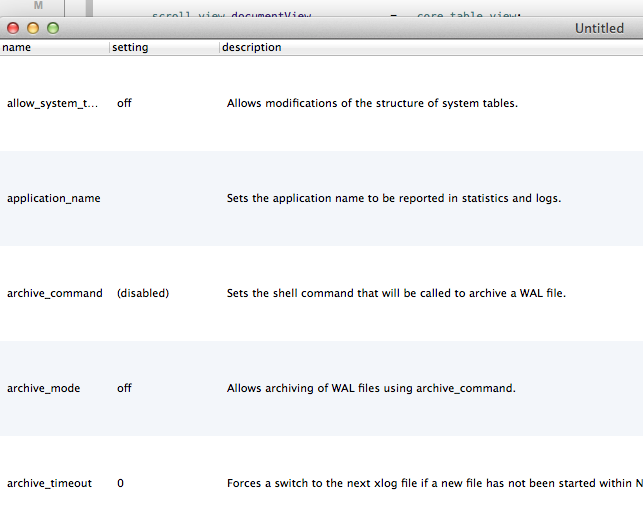 This won't work for multi-line text, but very good enough for quick vertical center if you don't need multi-line support.

I had the same problem and here is the solution I did :

1) In Interface Builder, select your NSTableCellView. Make sure it as big as the row height in the Size Inspector. For example, if your row height is 32, make your Cell height 32

--> The TextField will center itself in the cell

Not the answer you're looking for? Browse other questions tagged cocoa customization vertical-alignment nstextfieldcell or ask your own question.