I have written a small System.Windows.Forms.UserControl, call it userControl1, that seems to be working the way I want it to.

From within Visual Studio 2010's Designer, I can drag userControl1 from the toolbar and drop it on a Windows Form that I will call testForm1. I can wire-up userControl1, and it works as it should.

However, the purpose of userControl1 is to be able to use it in another UserControl, let's call it userControl2. 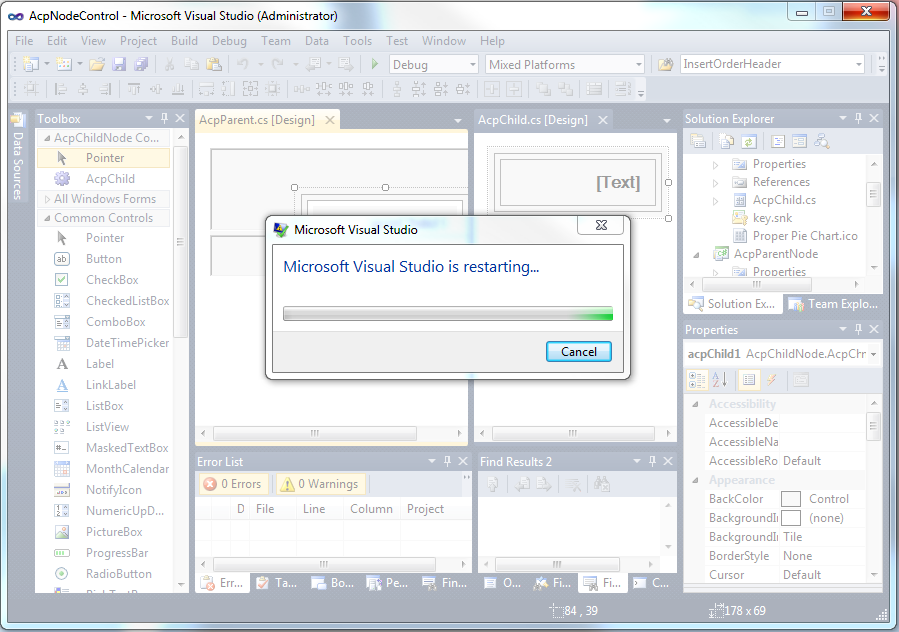 At this same time, an Application Error is logged in Event Viewer with Event ID 1000:

How can I go about trying to debug this error? Should I look at something in userControl1 or userControl2?

It seems this helped to resolve the issue, so I'm posting it as an answer.

In order to debug your control when used in Visual Studio designer, run two instances of Visual studio and open your project in both instances. Then, in one of the instances use Attach to process... option and attach to the second instance to debug it (devenv.exe process). This way, you should be able to see what the exception is.

There likely something in the constructor of your control that is attempting to access another something that isn't available, or is creating an exception that can't be caught by the IDE (StackOverflow, OutOfMemory, etc)

Not the answer you're looking for? Browse other questions tagged c# winforms visual-studio-2010 user-controls or ask your own question.