I tried to search posts, but I only found solutions for SQL Server/Access. I need a solution in MySQL (5.X).

I have a table (called history) with 3 columns: hostid, itemname, itemvalue.
If I do a select (select * from history), it will return

How do I query the database to return something like

I'm going to add a somewhat longer and more detailed explanation of the steps to take to solve this problem. I apologize if it's too long.

I'll start out with the base you've given and use it to define a couple of terms that I'll use for the rest of this post. This will be the base table:

This will be our goal, the pretty pivot table:

When I have to solve the problem of creating a pivot table, I tackle it using a three-step process (with an optional fourth step):

Let's apply these steps to your problem and see what we get:

Step 1: select columns of interest. In the desired result, hostid provides the y-values and itemname provides the x-values.

Step 2: extend the base table with extra columns. We typically need one column per x-value. Recall that our x-value column is itemname:

Note that we didn't change the number of rows -- we just added extra columns. Also note the pattern of NULLs -- a row with itemname = "A" has a non-null value for new column A, and null values for the other new columns.

Step 3: group and aggregate the extended table. We need to group by hostid, since it provides the y-values:

(Note that we now have one row per y-value.) Okay, we're almost there! We just need to get rid of those ugly NULLs.

Step 4: prettify. We're just going to replace any null values with zeroes so the result set is nicer to look at:

Considerations when applying this procedure:

Another option,especially useful if you have many items you need to pivot is to let mysql build the query for you:

FIDDLE Added some extra values to see it working

Taking advantage of Matt Fenwick's idea that helped me to solve the problem (a lot of thanks), let's reduce it to only one query:

I edit Agung Sagita's answer from subquery to join. I'm not sure about how much difference between this 2 way, but just for another reference.

but it will be a problem if sub query resulting more than a row, use further aggregate function in the subquery

It produces the expected results in the submitted case.

I figure out one way to make my reports converting rows to columns almost dynamic using simple querys. You can see and test it online here.

The number of columns of query is fixed but the values are dynamic and based on values of rows. You can build it So, I use one query to build the table header and another one to see the values:

You can summarize it, too: 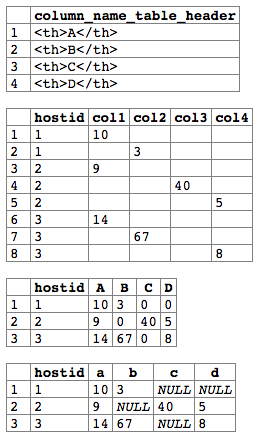 For one real example of use, this report bellow show in columns the hours of departures arrivals of boat/bus with a visual schedule. You will see one additional column not used at the last col without confuse the visualization: 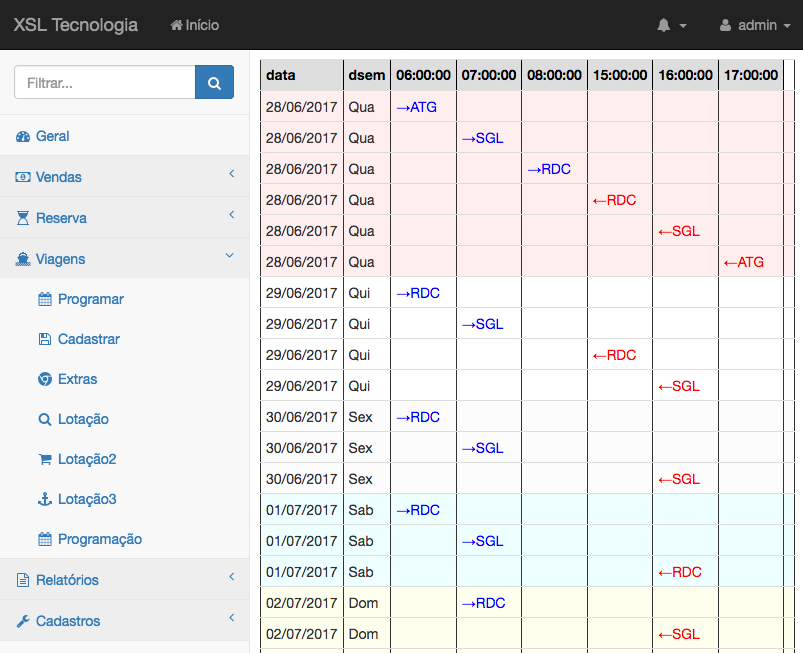 ** ticketing system to of sell ticket online and presential

I make that into Group By hostId then it will show only first row with values,
like:

If you could use MariaDB there is a very very easy solution.

Since MariaDB-10.02 there has been added a new storage engine called CONNECT that can help us to convert the results of another query or table into a pivot table, just like what you want: You can have a look at the docs.

First of all install the connect storage engine.

Now the pivot column of our table is itemname and the data for each item is located in itemvalue column, so we can have the result pivot table using this query:

Now we can select what we want from the pivot_table:

This isn't the exact answer you are looking for but it was a solution that i needed on my project and hope this helps someone. This will list 1 to n row items separated by commas. Group_Concat makes this possible in MySQL.

I'm sorry to say this and maybe I'm not solving your problem exactly but PostgreSQL is 10 years older than MySQL and is extremely advanced compared to MySQL and there's many ways to achieve this easily. Install PostgreSQL and execute this query

Not the answer you're looking for? Browse other questions tagged mysql sql pivot-table etl crosstab or ask your own question.

2915
Add a column with a default value to an existing table in SQL Server
577
How do I restore a dump file from mysqldump?
2794
Should I use the datetime or timestamp data type in MySQL?
785
How can I get column names from a table in SQL Server?
816
How to Join to first row
393
Adding multiple columns AFTER a specific column in MySQL
2247
How do I import an SQL file using the command line in MySQL?
473
Error related to only_full_group_by when executing a query in MySql